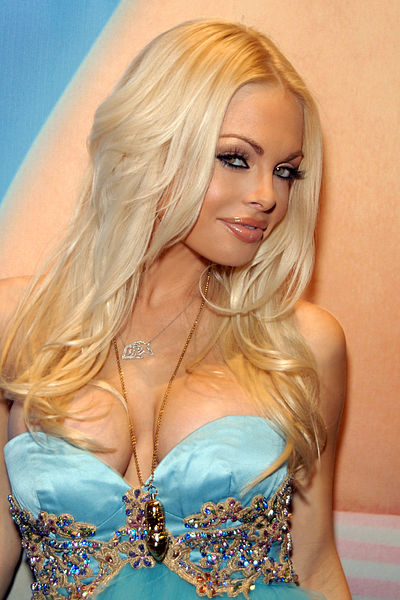 Cindy Taylor (born July 16, 1980) is a former American pornographic actress and model best known by her stage name Jesse Jane.[8] She is the recipient of numerous awards and nominations over her career in the adult industry including induction into the AVN and XRCO Hall of Fame. Jane is also the Australian Penthouse magazine Pet of the Month for November 2010. She was an exclusive contract performer for Digital Playground between 2002[9] and 2014.[10] In January 2015, she signed an exclusive, two-year performing contract with Jules Jordan Video[11] retiring in January 2017.

Jane was a military brat who grew up on various military bases in the Midwestern United States. She did extensive dance training[5] and was a varsity cheerleader at her high school in Rose Hill, Kansas. She graduated from Moore High School in Moore, Oklahoma in 1998.[12]
Read more...

Jane read an article on Tera Patrick that said that Patrick worked for adult-film production company Digital Playground. She contacted them and was quickly signed to a contract.[13][14] Her first scene was with Devon in No Limits.[13] Within months of winning the contract, she appeared on Showtime Network's Family Business, where she was filmed at the Adult Video News awards show and convention. The films in which Digital Playground cast Jane, such as No Limits, Beat the Devil, and Loaded, proved popular enough to warrant her own line of sex toys, as well as secure nominations for several awards. She starred in the Pirates series of erotic films.

In January 2007, an article in The New York Times stated that Jane intended to have her breast enhancement surgery re-done for high-definition movies.[23] On her official website, she wrote that she had her surgery on February 12 that year.

In 2015 interview, she announced she no longer goes by the name "Jesse Jane" but rather simply "Jesse". The reason was that she was in a dispute with her former employer of 12 years, Digital Playground, who owns the rights to her former stage name.[24]

In January 2017, Jane announced that she would retire from the adult industry and that the 2017 AVN Awards would be her last.[25]

In 2004, Jane made a cameo appearance in the film Starsky & Hutch and appeared on the cover of Drowning Pool's album Desensitized.[26]

On the July 25, 2006 episode of The Tonight Show with Jay Leno, during the "Jay Walking" segment, she gave her name as "Cindy" and said that she currently worked at Hooters. An adult magazine cover featuring her as Jesse Jane was then shown onscreen.[27] In 2005, she was featured as UnRated Magazine's Vixen, to launch the music review magazine's new edition of Vixens.

She was a guest star on the HBO dramedy series Entourage, in the ninth episode of the second season, "I Love You Too", which features the foursome making a trip to Comicon, where they get some help from the "Pussy Patrol," of which Jane is the leader.

On February 28, 2007 she featured on the Danish late night show den 11. time during the show she was interviewed by seemingly three Mads Brüggers.[28]

Jane was the Australian Penthouse Pet of the Month in November 2010.[29]

Jane has described herself as bisexual.[34] In 2004, she stated on the Howard Stern Show that she had a hysterectomy due to now dormant cervical cancer.[35]

Jesse Jane receiving the 2014 Venus Award for her Liftetime Achievement from Michael Kessler Jesse Jane with two F.A.M.E. Awards in 2007