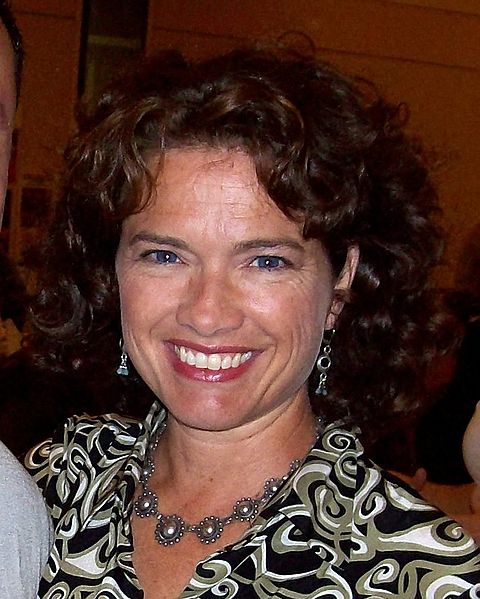 Heather Elizabeth Anderson (née Langenkamp; born July 17, 1964) is an American actress, producer, and prosthetic makeup artist.[2][3] She began her career as an extra in the Francis Ford Coppola films The Outsiders (1983) and Rumble Fish (1983) before becoming known for her role as Nancy Thompson in Wes Craven's A Nightmare on Elm Street (1984) and Chuck Russell's A Nightmare on Elm Street 3: Dream Warriors (1987), followed by appearances in two of Craven's cult films: a victim in Shocker (1989) and a fictionalized version of herself in Wes Craven's New Nightmare (1994).

Langenkamp's other roles include the figure skater Nancy Kerrigan in the NBC television film Tonya and Nancy: The Inside Story (1994), Marie Lubbock and Amy Boutilier on the ABC sitcom Growing Pains (1988-1990) and the spin-off series Just the Ten of Us (1988-1990) which both won Primetime Emmy Awards, Dorothy in Jonathan Zarantonello's The Butterfly Room (2012), and Moto in J. J. Abrams' Star Trek Into Darkness (2013). In 2010, she served as executive producer and narrator to the documentary Never Sleep Again: The Elm Street Legacy.

Langenkamp is the co-owner of the make-up FX firm AFX Studio[4] which has designed and manufactured award-winning make-up effects for film and television. She has worked as the special makeup effects coordinator for a variety of films including Dawn of the Dead (2004), Cinderella Man (2005), Evan Almighty (2007), and The Cabin in the Woods (2012).

Langenkamp was born in Tulsa, Oklahoma. Her mother, Mary Alice (née Myers), is an artist, and her father, Robert Dobie Langenkamp, is a petroleum attorney who served as Deputy Assistant Secretary of Energy in both the Carter Administration (where he was largely responsible for realizing the Strategic Petroleum Reserve) and the Clinton Administration (where he was largely responsible for privatizing Naval Petroleum Reserve No. 1), and as Director of the National Energy & Environmental Law & Policy Institute of the University of Tulsa College of Law.[5][6] She is of German, Scottish, and English ancestry. Langenkamp attended Holland Hall School in Tulsa [7] but later moved to Washington, D.C., where she graduated from The National Cathedral School for Girls in 1982.[8]
Read more...

Langenkamp's career began in film, where she was cast as an extra in Francis Ford Coppola's 1983 film The Outsiders. The same year, Langenkamp had a speaking role in Coppola's next film Rumble Fish, which earned her a SAG card.[9] Her scenes were deleted from the final cut of both films. The 1984 film Nickel Mountain, which is based on John Gardner's 1973 novel of the same name, marked her acting debut.[10]

While she was studying at Stanford University, Wes Craven cast her as teen heroine Nancy Thompson in his film A Nightmare on Elm Street. Craven wanted someone very "non-Hollywood" to play Nancy, and he believed Langenkamp met this quality.[11] She beat out more than 200 actresses auditioning for the part.[12] The film earned $25 million at the American box office.[13] Langenkamp received the Best Actress Award at the Avoriaz Film Festival for her role as Nancy.[14] Langenkamp's next role was Beth Kennerly in the television film Passions. The same year, she auditioned for the role of Samantha "Sam" Belmont in the science fiction horror comedy film Night of the Comet, but the part went to Kelli Maroney.[15]

In 1985, Langenkamp was cast in Suburban Beat, a TV pilot that was not picked up for a full series, where she played Hope Sherman, the youngest housewife.[16] The same year, Langenkamp starred in the music video for ZZ Top's "Sleeping Bag".[17] The following year, she guest starred in CBS Schoolbreak Special and ABC Afterschool Specials. In 1987, Langenkamp reprised her role as Nancy in the film A Nightmare on Elm Street 3: Dream Warriors. The film focused on the survivors of Freddy Krueger's previous attempts.[18] The same year, she portrayed Tracy in The New Adventures of Beans Baxter and Monica in Hotel.

Langenkamp at the Fan Expo Canada in 2014

Langenkamp played Marie Lubbock on the ABC television series Just the Ten of Us, a spin-off of the popular ABC situation comedy Growing Pains (on which Langenkamp guest-starred), from 1988 to 1990. Both Growing Pains and Just the Ten of Us won a Primetime Emmy Award for Outstanding Lighting Design / Lighting Direction for a Variety Series.[19] [20] That same year, she and her castmates were nominated for the Young Artist Award for Best Young Actor/Actress Ensemble in a Television Comedy, Drama Series or Special. In 1989, she had a cameo role as the first victim of Horace Pinker in Wes Craven's Shocker.[21][22] In the film, she is shown on a news report being pulled away on a stretcher. In a retrospective interview, Langenkamp revealed that she auditioned for an episode of the television series Freddy's Nightmares.[23]

Langenkamp returned to the A Nightmare on Elm Street franchise, playing a fictionalized version of herself in the 1994 film Wes Craven's New Nightmare. The same year, she portrayed the figure skater Nancy Kerrigan in the NBC television film Tonya & Nancy: The Inside Story, which focused on the 1994 attack on Kerrigan. In 1995, Langenkamp starred in The Demolitionist.[24] In 1997, Langenkamp portrayed Lou Ann Solomon in one episode of the short-lived science fiction/horror television series Perversions of Science. Langenkamp later starred in the direct-to-video film Fugitive Mind (1999).

In 2000, she had a guest role in 18 Wheels of Justice as a waitress. The following year, Langenkamp, alongside her husband David Anderson, launched the Malibu Gum Factory which sold locally manufactured chewing gum that featured trading cards of local surfers inside each package.[25] In 2002, Langenkamp portrayed Janet Thompson in an episode of JAG. After this appearance, she took a break from acting to focus on her family.[26] In 2005, Langenkamp was cast in the Wes Craven horror film Cursed. The film had to be reshot and rewritten causing Langenkamp to leave the production due to scheduling conflicts.[27]

I would never say no to the option of doing something like that. It's a great universe and it's one of the most creative franchises, there's more to be made, I'm sure.

In 2007, Langenkamp was cast as herself in the indie mockumentary film The Bet (released ten years later as a web series with the same title). She starred in, executive produced, and narrated the 2010 documentary Never Sleep Again: The Elm Street Legacy. The following year, Langenkamp produced a documentary entitled I Am Nancy, which focused on her experience portraying Nancy in the A Nightmare on Elm Street films.[29] In 2012, Langenkamp portrayed Dorothy in the horror film The Butterfly Room. As a partner in her husband's Special FX Make-up company, AFX Studio, Heather worked on The Cabin in the Woods. The same year, she appeared as herself in a short documentary entitled The Cabin in the Woods: An Army of Nightmares - Makeup & Animatronic that was included in the film's Blu-ray release which examined how the creatures were brought to life through special effects.[30][31] The following year, Langenkamp appeared as herself in the documentary Fantasm[32] and had a small role of an alien in the film, Star Trek Into Darkness in which her husband David Leroy Anderson designed all of the Special FX make-up.[33] In 2014, she made a cameo appearance in American Horror Story's fourth season, Freak Show, as a Tupperware lady.[34]

In 2015, Langenkamp was cast in the short film Intruder, portrayed Sharon Monroe in 4 episodes of The Bay, and narrated the short horror film Vault of the Macabre II.[35][36] In 2016, Langenkamp starred in Home.[37] In 2017, Langenkamp had a cameo role in the short horror comedy film The Sub and appeared as herself in the documentary Unearthed & Untold: The Path to Pet Sematary. She is set to star in the upcoming films Flashlight[38] and Hellraiser: Judgment. In 2017, Langenkamp portrayed the adult version of the "final girl" Donna Boone in the Syfy television horror film Truth or Dare, guiding a group of teenagers with their battle with a deadly spirit that left her physically scarred several years prior.[39]

In April 2017, Langenkamp participated in AbilityFirst's Stroll & Roll, an event that raises awareness and funds for people with disabilities.[40]

Langenkamp married Alan Pasqua while filming A Nightmare on Elm Street in 1984, but they divorced in 1987.[41] Elements of the plot for Wes Craven's New Nightmare are based on an incident in which Langenkamp received numerous threatening letters from an obsessed fan after the cancellation of Just the Ten of Us.[42] Langenkamp has been married to David LeRoy Anderson since 1989 and had two children with him.