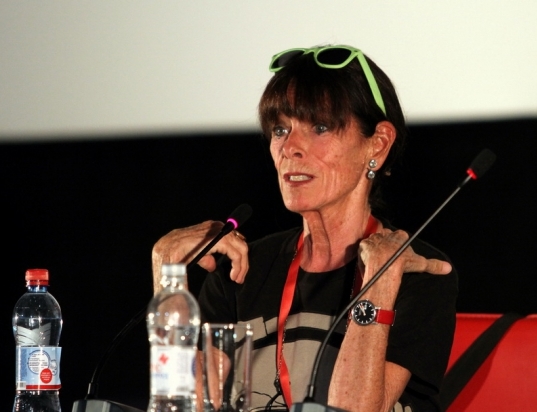 Geraldine Leigh Chaplin (born July 31, 1944)[1][2] is a prolific actress of English, French, and Spanish language films, the fourth child of Charlie Chaplin, the first of eight with fourth wife Oona O'Neill.[3] After beginnings in dance[3][1] and modeling,[4] she turned her attention to acting, and made her English-language acting debut (and came to prominence in what would be a Golden Globe-nominated role[5]) in her portrayal of Tonya in David Lean's Doctor Zhivago (1965).[6] She made her Broadway acting debut in Lillian Hellman's The Little Foxes in 1967,[7] and received her second Golden Globe nomination for Robert Altman's Nashville (1975). She received a BAFTA nomination for her role in Welcome to L.A. (1976). She played her grandmother Hannah Chaplin in the biopic, Chaplin (1992) for which she received her third Golden Globe nomination.

Chaplin has appeared in a wide variety of critically recognised Spanish and French films. She starred in Les Uns et les Autres (1981), Life Is a Bed of Roses (1983) and the Jacques Rivette experimental film Love on the Ground (1984). She enjoyed her greatest critical success collaborating with her long time life partner, director Carlos Saura,[not verified in body] starring in his films Ana and the Wolves (1973), Cría cuervos (1976), Elisa, vida mía (1977), and Mamá cumple cien años (1979). She was awarded a Goya Award for her role in En la ciudad sin límites (2002),[8] and was nominated again for The Orphanage (2007).[not verified in body] Her contribution to Spanish cinema culminated in her being awarded the Gold medal by the Spanish Academy of Cinematographic Arts and Sciences in 2006.[9]

Geraldine Leigh Chaplin was born on July 31, 1944, in Santa Monica, California,[2][1][10] the fourth child of actor and filmmaker Charlie Chaplin, and the first child of his fourth wife, Oona O'Neill,[3] whom he married in 1943.[11] Chaplin was in his mid-fifties, and Oona was eighteen years old; Geraldine was the first of their eight children.[3][11] Her paternal grandparents were English singers Charles Chaplin, Sr. and Hannah Chaplin (born Hannah Harriet Pedlingham Hill), and her maternal grandparents were Nobel- and Pulitzer Prize-winning American playwright Eugene O'Neill and English-born writer Agnes Boulton.[12]

When Geraldine was eight years old, her father took the family on vacation to Britain and Europe; two days after the family set sail, the U.S. Attorney General signed an order refusing him permission to re-enter the country.[13] Her father then moved the family to Switzerland.[14] She attended boarding school there, where she became fluent in French and Spanish.[1] Also in this time period, Geraldine appeared in a small part in her father's film "Limelight" (1952).[1]

At 17-years of age, the young Chaplin decided to forgo college to pursue dance instead,[3] and studied ballet for two years in England,[citation needed] including a period in 1961 at the Royal Ballet School.[1] Chaplin then danced professionally for a year in Paris.[citation needed] Although a good dancer, she felt she had not trained from an early enough age to excel at it and so gave up ballet.[citation needed] Said Chaplin "I didn't leave ballet, ballet left me."[This quote needs a citation][not in citation given] It was a great disappointment to her.

Chaplin then found work as a fashion model in Paris.[citation needed][15][4] She was then discovered by David Lean.[when?][where?][3] It would be many years before she could bring herself to see a ballet performance.[citation needed]

When her dream of becoming a ballet dancer ended, she followed her father into what would become a prolific acting career.[3] She came to prominence[citation needed] in the role of Tonya in David Lean's Doctor Zhivago (1965).[3] David Lean chose her to play the main character's wife,[6] for which she received a Golden Globe Award nomination in the category, "Most Promising Female Newcomer."[5] In an interview to publicise the film, she explained, "Because of my name, the right doors opened."[16]

In 1967, she made her Broadway debut in Lillian Hellman's The Little Foxes.[7] Her performance was praised by Clive Barnes in a New York Times review, where he noted that Chaplin "acts with spirit and force… with a magnificently raw-voiced sincerity" giving a performance of "surprising power."[17]

Chaplin starred alongside Charlton Heston in the American historical film The Hawaiians (1970).

Chaplin then appeared in The Three Musketeers (1973), as well as the sequel, The Four Musketeers (1974). Chaplin was cast as the obnoxious BBC reporter Opal in Robert Altman's Nashville (1975), for which she received her second Golden Globe nomination, for Best Supporting Actress.[18] She went on to star in the Altman films Buffalo Bill and the Indians, or Sitting Bull's History Lesson (1976), and then A Wedding (1978), doing Roseland (1977) in between.

She starred in several films produced by Altman and directed by Alan Rudolph, with a BAFTA-nominated role in Welcome to L.A. (1976), in which she played a housewife addicted to cab rides.[21] She received critical acclaim for her role in Remember My Name (1978), in which she played Anthony Perkins' murderous estranged wife.[citation needed]

In an interview with The New York Times in 1977,[full citation needed] Chaplin cited that her career was going more successfully in Europe than in the United States. She complained that "I only seem to work with Altman here ... I don't have any offers in this country, none. Not even an interesting script to read. The only person who ever asks me is Altman - and James Ivory."[This quote needs a citation]

In the biographical film about her father, Chaplin (1992), she played her grandmother Hannah Chaplin, for which she was nominated for her third Golden Globe award.[18] Soon after, she was directed by Martin Scorsese in The Age of Innocence (1993), and appeared in Franco Zeffirelli's version of Jane Eyre (1996).

Chaplin went on to appear in Mother Teresa: In the Name of God's Poor (1997).

Chaplin received a Goya Mejor Actriz de Reparto for her role in Spanish-Argentine thriller En la ciudad sin límites (In the City Without Limits, 2002).[8] Other notable Spanish films she collaborated with and appeared in Pedro Almodóvar's Talk to Her (2002), and José Antonio Bayona's The Orphanage (2007), for which she received a second Goya Award nomination.[citation needed] She also recently starred in the Catalan drama, The Mosquito Net (2010), for which she was awarded the Crystal Globe.[22]

Chaplin appeared in The Wolfman, in 2010.

In Americano, she appeared with Salma Hayek, and featured with Jane Fonda in All Together (both 2011). She reunited with Juan Antonio Bayona for the film The Impossible (2012). Chaplin received the Best Actress Award at the Havana Film Festival for her role in the Dominican Republic film Sand Dollars (2014).[citation needed]

Chaplin dated a number of men in her younger years, and had two serious, long term relationships.[citation needed] The first was with Carlos Saura, a Spanish film director who directed her in several films, with whom she began a twelve-year relationship in 1967.[citation needed] In 1976 she gave birth to their son, Shane Saura Chaplin.[citation needed] In 1978 the Chaplin family were the victims of a failed extortion plot by kidnappers who had stolen the body of Charlie Chaplin. Geraldine negotiated with the kidnappers, who had also threatened her infant son.[23]

Her second long-term relationship has been with Chilean cinematographer Patricio Castilla whom she married in 2006, and with whom she had a daughter, Oona, in 1986.[citation needed]

As of 2011[update], Chaplin maintains a home in Miami. She also spends time in residences between Madrid, Spain, and Corsier-sur-Vevey, Switzerland (the latter near the former long-time home of her and her father).[24][25]

Chaplin at a screening of The Orphanage in Madrid in 2007.