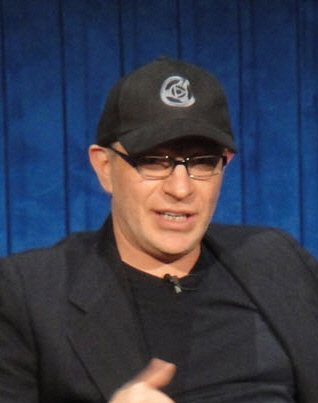 Akiva J. Goldsman (born July 7, 1962) is an American film and television writer, director, and producer known for his work on blockbuster motion pictures and adaptations of popular novels.[1]

Goldsman's filmography as a screenwriter includes Batman Forever and its sequel Batman & Robin, I, Robot, I Am Legend, Cinderella Man, and numerous rewrites both credited and uncredited. He also wrote more than a dozen episodes for the science fiction television series Fringe.

In 2006, Goldsman re-teamed with A Beautiful Mind director Ron Howard to adapt Dan Brown's novel The Da Vinci Code for Howard's film version, receiving mixed reviews for his work. He also penned the screenplay for its 2009 prequel Angels & Demons.

Akiva Goldsman was born in New York City, the son of Tev Goldsman, a therapist, and Mira Rothenberg, a child psychologist.[2] His family is Jewish. His parents ran a group home for emotionally disturbed children. Goldsman's parents were occupied with their work, and Goldsman said, "By the time I was 10 or 12, I realized they had taken my parents away from me. I wanted nothing more to do with that world. I wanted to be a writer. I had a fantasy that someday I'd see my name on a book." In 1983, Goldsman attended Wesleyan University in Middletown, Connecticut.[3] After graduation, Goldsman studied creative writing at New York University and began writing screenplays.[citation needed]
Read more...

In 1994, he wrote the screenplay that would become the film Silent Fall.[2] Afterward, director Joel Schumacher hired Goldsman to write The Client.[3] In the late 1990s, Akiva Goldsman wrote screenplays for A Time to Kill and Batman & Robin, which were considered subpar quality and got him nominated for the Golden Raspberry Awards. Goldsman came to the realization, "I sort of got lost. I was writing away from what I knew. It's a little like a cat chasing its tail. Once you start making movies that are less than satisfying, you start to lose your opportunity to make the satisfying ones. People are not serving them up to you, saying, 'You're the guy we want for this.'" Goldsman appealed to producer Brian Grazer to write the screenplay for A Beautiful Mind and ultimately won an Academy Award for Writing Adapted Screenplay. The star of A Beautiful Mind, Russell Crowe, later invited Goldsman and director Ron Howard to film Cinderella Man, and Goldsman wrote the film's screenplay.[4]

Goldsman produced the Universal Pictures feature Lone Survivor, from writer/director Peter Berg, based on the book Lone Survivor: The Eyewitness Account of Operation Redwing and the Lost Heroes of SEAL Team 10 by Marcus Luttrell. It tells the story of Luttrell's Navy SEAL team in 2005 Afghanistan, on a mission to kill a terrorist leader. The movie starred Mark Wahlberg, Emile Hirsch, Ben Foster and Taylor Kitsch, and was released in 2013.[6]

Goldsman made his feature film directing debut with Winter's Tale, a film adaption of the Mark Helprin novel. Goldsman worked for seven years on developing the project with Warner Bros. Pictures, finally getting a green light on the script (which he wrote). The principal cast consisted of Colin Farrell, Russell Crowe, Jessica Brown Findlay, Jennifer Connelly, Will Smith and William Hurt.[7] The film was released on February 14, 2014. He also directed the horror thriller film Stephanie (2017),[8] with Frank Grillo in the leading role,[9] and co-wrote and produced the film adaptation of Stephen King's The Dark Tower series, which was released on August 4, 2017.[10]

In June 2015, Paramount Pictures announced that Goldsman would head a team of writers and filmmakers to create a multifilm cinematic universe branching out from Hasbro's Transformers franchise.

Goldsman was revealed in September 2018 to have been on the writing staff for the new Star Trek series revolving around the character Jean-Luc Picard in his later years.[11]

Goldsman's second wife, film producer Rebecca Spikings-Goldsman, died of a heart attack on July 6, 2010, at the age of 42.[14] Rebecca was the daughter of producer Barry Spikings.

In 2012, Akiva met his third wife, model/actress/equestrian Joann Richter. The couple were married in 2014 and have two daughters, and divide their time between Los Angeles and New York.[15]

In 2016, it was announced that Goldsman would script an adaptation of Isaac Asimov's The Caves of Steel.[16] Its final release date is still unknown. In July 2017, Paramount Pictures announced plans to make a film adaptation of the novel Rainbow Six by Tom Clancy with Goldsman as producer.[17]