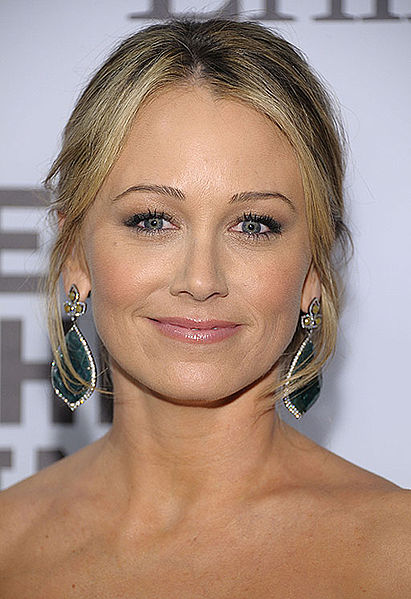 Christine Joan Taylor-Stiller (born July 30, 1971) is an American actress. She is known for playing Marcia Brady in The Brady Bunch Movie and A Very Brady Sequel, as well as roles in The Wedding Singer, Zoolander, and DodgeBall: A True Underdog Story.

Taylor was born on July 30, 1971, in Allentown, Pennsylvania, to Joan, a homemaker, and Albert E. "Skip" Taylor III, who owns a security company.[1] She grew up in neighboring Wescosville, Pennsylvania, she has one brother. Taylor was raised Roman Catholic and attended Allentown Central Catholic High School.[2]
Read more...

Taylor began her acting career in 1989 on the Nickelodeon children's television series Hey Dude where she played the lifeguard Melody Hanson. She continued in that role through 1991 while making various guest appearances on other programs. In 1995, Taylor was cast as Marcia Brady in The Brady Bunch Movie and later in A Very Brady Sequel. Following The Brady Bunch Movie, Taylor made several comedic guest appearances on the TV series Ellen, landing the lead role in the television series Party Girl, based on the 1995 film of the same name, and more guest appearances on Seinfeld and Friends. She played the racist school bully Laura Lizzie in the 1996 horror film The Craft, and also played Drew Barrymore's cousin, Holly Sullivan, in the 1998 comedy The Wedding Singer. In 2001, she starred alongside her then husband Ben Stiller in Zoolander.

Later, she made television appearances as a guest star, in 2005, in two episodes of Arrested Development as "Sally Sitwell" and, in 2006, in an episode of NBC's My Name Is Earl. In July 2006, Taylor's husband Ben Stiller announced plans to direct a CBS sitcom starring Taylor,[3] but the series never aired.[2] She has appeared with Mandy Moore in both Dedication and License to Wed. In 2010, Taylor guest starred in Hannah Montana Forever. In 2010, she also starred in the Hallmark Channel Christmas movie Farewell Mr. Kringle. In 2013, Taylor reprised her role as Sally Sitwell in two episodes of the revived Arrested Development.

Taylor married actor Ben Stiller on May 13, 2000.[4] They met while making the TV show Heat Vision and Jack. Stiller and Taylor appeared together in Zoolander, Dodgeball: A True Underdog Story, Tropic Thunder, Zoolander 2, and the TV series Arrested Development and Curb Your Enthusiasm. They live in Westchester County, New York[5] and have a daughter and a son.[6] Both have adopted a vegan diet for health reasons.[7] After 17 years of marriage, Stiller and Taylor separated in 2017.[8]