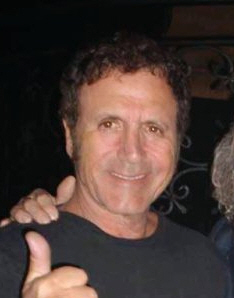 Frank Stallone, Jr. (born July 30, 1950) is an American actor, singer-songwriter and guitarist. He is the younger brother of Sylvester Stallone and wrote music for his movies. His song "Far from Over", which appeared in the 1983 film Staying Alive and was also featured in the film's soundtrack, peaked at number ten on the Billboard Hot 100, for which he received a Golden Globe and a Grammy Nomination.

Stallone was born in New York City. He is the younger son of Jacqueline Stallone (née Labofish), an astrologer, former dancer, and promoter of women's professional wrestling, and Frank Stallone Sr., a hairdresser. His father was an Italian immigrant, and his mother's family was from Brittany (France) and Ukraine. Stallone's brother is actor Sylvester Stallone. In his teen years, he went to Lincoln High School in Northeast Philadelphia.[1]
Read more...

Stallone has worked as a singer. He wrote and performed "Far from Over" for the 1983 film Staying Alive which was written and directed by his older brother.[2] The song peaked at #10 on the Billboard Hot 100, becoming his only major pop hit, and it was nominated for a Golden Globe award for Best Original Song from a Motion Picture. The album won a Grammy Award for Best Album of Original Score Written for a Motion Picture or Television Special.

In the mid-1990s, Stallone became the subject of a running gag on Saturday Night Live, during its "Weekend Update" segment hosted by Norm Macdonald.[3] During each episode, Macdonald (at some point in the mock-newscast) would read a legitimate news headline, then would propose a question asking the cause of that news, which would always be answered by, "You guessed it—Frank Stallone." At that moment, a publicity photo of Stallone would appear on the screen. For example, Macdonald would say:

In economic news, unemployment figures rose slightly for the month of October, with declines in the Dow Jones and NASDAQ. The reason for the sudden downturn? You guessed it—Frank Stallone.

Stallone also played himself in a recurring role on the short-lived sitcom Movie Stars, alongside fellow celebrity siblings Don Swayze and Joey Travolta.

Stallone appeared as a boxing consultant on the NBC reality television series The Contender in 2005. He appeared on the Howard Stern Radio and television show on several occasions. During one appearance on the Howard Stern Show, Frank Stallone had a boxing match with television reporter Geraldo Rivera; Frank Stallone won the bout. He was a contestant on Hulk Hogan's Celebrity Championship Wrestling, a reality competition series on CMT that followed 10 celebrity contestants as they trained to be professional wrestlers. He also appeared on an episode of Tim and Eric Awesome Show, Great Job!.