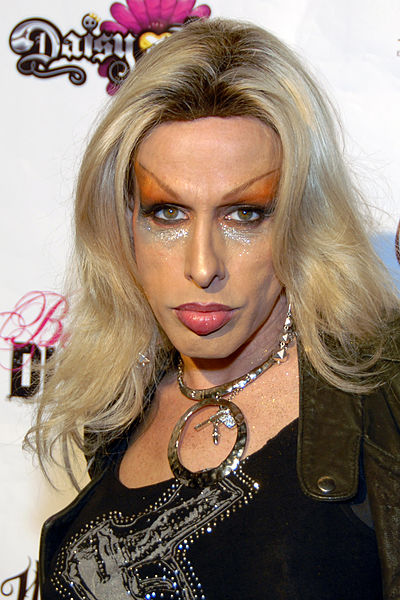 In 1982, at the age of 12, Arquette's first acting gig was as "this little kid who's on a ride with all these women and whatnot" in the music video "She's a Beauty" by The Tubes.[7] In 1986, Arquette debuted on the big screen in an uncredited role as Alexis, the androgynous friend and bandmate of sexually ambivalent teenager Max Whiteman (Evan Richards) in Down and Out in Beverly Hills.[8]

Arquette, in the earlier years of her career, primarily performed as a female impersonator, frequently under the name "Eva Destruction". Later in her career, she made public that she had begun the process leading to sex reassignment surgery.[9] To this end, Arquette had publicly declared that she considered her gender to be female.

At 19, Arquette played trans sex worker Georgette in the screen adaptation of Last Exit to Brooklyn.[10] The majority of Arquette's film work was in low-budget or independent films. In total, Arquette starred in more than 40 movies, including I Think I Do, Children of the Corn V: Fields of Terror, and Sometimes They Come Back... Again. Arquette also starred as a crack addict opposite Tim Roth in Jumpin' at the Boneyard, as a teenage boy seeking revenge for a horrible childhood in the New Zealand-shot horror fantasy Jack Be Nimble, and as a murderous drag queen in the low budget comedy Killer Drag Queens on Dope.[11][12]

Arquette also had supporting roles in Pulp Fiction, Threesome and Bride of Chucky,[13] and she played a Boy George fanatic, George Stitzer, in the Adam Sandler-Drew Barrymore film The Wedding Singer, singing "Do You Really Want to Hurt Me" over and over. Her role as Georgina, a Boy George impersonator, in another Sandler-Barrymore film, Blended, was a reference to that role. In 2001, Arquette returned to New Zealand to play Roman emperor Caligula in two episodes of Xena: Warrior Princess.[14] That same year, Arquette guest starred in the Friends episode "The One with Chandler's Dad", in which she directly interacted with her sister-in-law, Courteney Cox. Also in the same year, she cameoed in Son of the Beach.[14]

In September 2005, VH1 announced Arquette as one of the celebrity house-guests on the 6th season of The Surreal Life. On January 31, 2007, Arquette was a featured celebrity client and guest judge on the première episode of Bravo's reality show Top Design.[15] Arquette also made a cameo appearance in the music video for Robbie Williams' song "She's Madonna".[16]

In 2004, Arquette expressed an interest in undergoing formal male-to-female transitioning by the use of hormone treatments and, ultimately sex reassignment surgery, which she realized in 2006, in her late 30s.[17] Those experiences were documented in the film Alexis Arquette: She's My Brother, which debuted at the 2007 Tribeca Film Festival.[18] Arquette was a vocal supporter of transgender people, including Chaz Bono, who transitioned from 2006 to 2008.[17]

Arquette contracted HIV in 1987.[19] In her later life, she suffered from health issues as a result of her HIV-positive status.[19][20][21] Amid these increasing complications, Alexis began presenting herself again as a man in 2013.[20] Her brother David Arquette said that she told him she was "gender suspicious", and alternately felt like a man or a woman at different times.[22][23][24] Arquette was placed in a medically induced coma and died on September 11, 2016, surrounded by close family, at the age of 47. Arquette was serenaded with David Bowie's "Starman".[25][26][27] The cause of death was cardiac arrest caused by myocarditis ultimately stemming from HIV.[19][1]

Report a problem
Biography of Alexis Arquette at FanPal • 2022