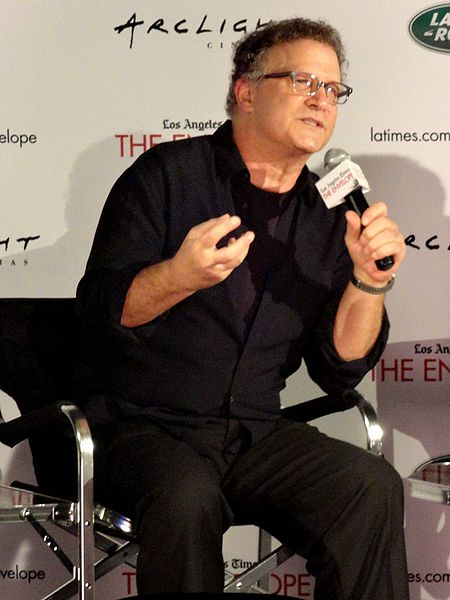 Albert Lawrence Brooks (born Einstein; July 22, 1947) is an American actor, comedian, writer, and director. He received an Academy Award nomination for Best Supporting Actor for 1987's Broadcast News and was widely praised for his performance in the 2011 film Drive.[1] His voice acting credits include Marlin in Finding Nemo (2003) and Finding Dory (2016), and recurring guest voices for The Simpsons, including Russ Cargill in The Simpsons Movie (2007). He has directed, written, and starred in several comedy films, such as Modern Romance (1981), Lost in America (1985), and Defending Your Life (1991). He is also the author of 2030: The Real Story of What Happens to America (2011).

Brooks was born in Beverly Hills, California, the son of Thelma Leeds (née Goodman), a singer and actress, and Harry Einstein, a radio comedian who performed on Eddie Cantor's radio program and was known as Parkyakarkus.[2] His brothers are comedic actor Bob Einstein, better known as a character he created named "Super Dave Osborne", and for a recurring role in Curb Your Enthusiasm; and Cliff Einstein, a partner and longtime chief creative officer at Los Angeles advertising agency Dailey & Associates. His half-brother was Charles Einstein (1926-2007), a writer for such television programs as Playhouse 90 and Lou Grant. Brooks is Jewish,[3] and his grandparents emigrated from Austria and Russia. He grew up among show business families in southern California, attending Beverly Hills High School with Richard Dreyfuss and Rob Reiner.[4]
Read more...

Brooks attended Carnegie Mellon University in Pittsburgh, but dropped out after one year to focus on his comedy career.[5] By the age of 19, he had changed his professional name to Albert Brooks, joking that "the real Albert Einstein changed his name to sound more intelligent".[6] He began a comedy career that quickly made him a regular on variety and talk shows during the late 1960s and early 1970s. Brooks led a new generation of self-reflective baby-boomer comics appearing on NBC's The Tonight Show Starring Johnny Carson. His onstage persona, that of an egotistical, narcissistic, nervous comic, an ironic showbiz insider who punctured himself before an audience by disassembling his mastery of comedic stagecraft, influenced other '70s post-modern comedians, including Steve Martin, Martin Mull, and Andy Kaufman.

After two successful comedy albums, Comedy Minus One (1973) and the Grammy Award-nominated A Star Is Bought (1975), Brooks left the stand-up circuit to try his hand as a filmmaker. He had already made his first short film, The Famous Comedians School, a satiric short and an early example of the mockumentary subgenre that appeared on the PBS show The Great American Dream Machine in 1972.[7]

In 1975, he directed six short films for the first season of NBC's Saturday Night Live:

In 1976, he appeared in his first mainstream film role, in Martin Scorsese's landmark Taxi Driver; Scorsese allowed Brooks to improvise much of his dialogue. The role reflected Brooks's decision to move to Los Angeles to enter the film business. In an interview, Brooks mentioned a conversation he had had with Taxi Driver screenwriter Paul Schrader, in which Schrader said that Brooks's character was the only one in the movie that he could not "understand" - a remark that Brooks found amusing, as the movie's antihero was a psychotic loner.

Brooks directed his first feature film, Real Life, in 1979. The film, in which Brooks (playing a version of himself) obnoxiously films a typical suburban family in an effort to win both an Oscar and a Nobel Prize, was a sendup of PBS's An American Family documentary. It has also been viewed as foretelling the future emergence of reality television.[8] Brooks also made a cameo appearance in the film Private Benjamin (1980), starring Goldie Hawn. (He also got starring credits in the film, even though his character dies within roughly the first half-hour of the film.)

Through the 1980s and 1990s, Brooks co-wrote (with longtime collaborator Monica Johnson), directed and starred in a series of well-received comedies, playing variants on his standard neurotic and self-obsessed character. These include 1981's Modern Romance, where Brooks played a film editor desperate to win back his ex-girlfriend (Kathryn Harrold). The film received a limited release and ultimately grossed under $3 million domestically,[9] but was well received by critics, with one reviewer commenting that the film was "not Brooks at his best, but still amusing".[10] His best-received film, Lost in America (1985), featured Brooks and Julie Hagerty as a couple who leave their yuppie lifestyle and drop out of society to live in a motor home as they have always dreamed of doing, meeting disappointment.

Brooks's Defending Your Life (1991) placed his lead character in the afterlife, put on trial to justify his human fears and determine his cosmic fate. Critics responded to the offbeat premise and the chemistry between Brooks and Meryl Streep, as his post-death love interest. His later efforts did not find large audiences, but still retained Brooks's touch as a filmmaker. He garnered positive reviews for Mother (1996), which starred Brooks as a middle-aged writer moving back home to resolve tensions between himself and his mother (Debbie Reynolds). 1999's The Muse featured Brooks as a Hollywood screenwriter who has "lost his edge" using the services of an authentic muse (Sharon Stone) for inspiration. In an interview with Brooks with regards to The Muse, Gavin Smith wrote, "Brooks's distinctive film making style is remarkably discreet and unemphatic; he has a light, deft touch, with a classical precision and economy, shooting and cutting his scenes in smooth, seamless successions of medium shots, with clean, high-key lighting."[11]

Brooks has appeared as a guest voice on The Simpsons five times during its run (always under the name A. Brooks), and is described as the best guest star in the show's history by IGN, particularly for his role as supervillain Hank Scorpio in the episode "You Only Move Twice".[12]

Brooks also acted in other writers' and directors' films during the 1980s and 1990s. He had a cameo in the opening scene of Twilight Zone: The Movie, playing a driver whose passenger (Dan Aykroyd) has a shocking secret. In James L. Brooks's hit Broadcast News (1987), Albert Brooks was nominated for an Academy Award for Best Supporting Actor for playing an insecure, supremely ethical network TV reporter, who offers the rhetorical question, "Wouldn't this be a great world if insecurity and desperation made us more attractive?" He also won positive notices for his role in 1998's Out of Sight, playing an untrustworthy banker and ex-convict.

Brooks received positive reviews for his portrayal of a dying retail store owner who befriends disillusioned teen Leelee Sobieski in My First Mister (2001). Brooks continued his voiceover work in Pixar's Finding Nemo (2003), as the voice of Marlin, one of the film's protagonists. In 2005, his film Looking for Comedy in the Muslim World was dropped by Sony Pictures due to their desire to change the title. Warner Independent Pictures purchased the film and gave it a limited release in January 2006; the film received mixed reviews and a low box office gross. The movie goes back to the days of Brooks's Real Life, as Brooks once again plays himself, a filmmaker commissioned by the U.S. government to see what makes the Muslim people laugh, thus sending him on a tour of India and Pakistan.

In 2006 he appeared in the documentary film Wanderlust as David Howard from "Lost in America". The documentary included many other well known people. In 2007, he continued his long term collaboration with The Simpsons by voicing Russ Cargill, the central antagonist of The Simpsons Movie.

He has played Lenny Botwin, Nancy Botwin's estranged father-in-law, on Showtime's television series Weeds.[13] St. Martin's Press published his first novel, 2030: The Real Story of What Happens to America, on May 10, 2011.[14]

In 2011, Brooks co-starred as the vicious gangster Bernie Rose, the main antagonist in the motion picture Drive, alongside Ryan Gosling and Carey Mulligan, a role that has been given much critical praise and positive reviews, with several critics proclaiming Brooks' performance as one of the film's best aspects. After receiving awards and nominations from several film festivals and critic groups, but not an Academy Award nomination, Brooks responded humorously on Twitter, "And to the Academy: ‘You don't like me. You really don't like me’."[15][16]

In 2016, Brooks voiced Tiberius, a curmudgeonly red-tailed hawk in The Secret Life of Pets, and reprised the role of Marlin from Finding Nemo in the 2016 sequel Finding Dory. Dory is Brooks's largest grossing film to date.