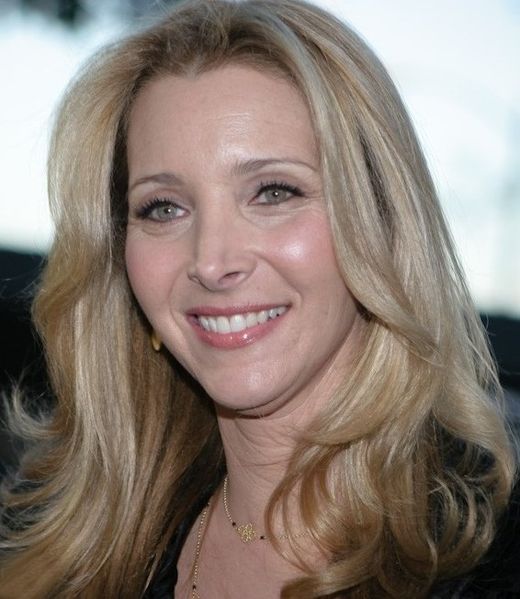 Lisa Valerie Kudrow[1] (/ˈkuːdroʊ/; born July 30, 1963)[2] is an American actress, comedian, writer, and producer. After making guest appearances in several television sitcoms, including Cheers, she came to prominence with her recurring role of Ursula in Mad About You (1993-1999). Kudrow gained worldwide recognition for portraying Phoebe Buffay on the television sitcom Friends (1994-2004), for which she received several accolades, including a Primetime Emmy Award for Outstanding Supporting Actress in a Comedy Series from six nominations, two Screen Actors Guild Awards from 12 nominations, and a Golden Globe Award nomination.

Kudrow starred in the cult comedy film Romy and Michele's High School Reunion (1997) and followed it with an acclaimed performance in the romantic comedy The Opposite of Sex (1998), which won her the New York Film Critics Circle Award for Best Supporting Actress and a nomination for the Independent Spirit Award for Best Supporting Female. In 2005, she went on to produce, write and star in the HBO comedy series The Comeback, which was revived nine years later for a second season. Kudrow received two Primetime Emmy Award for Outstanding Lead Actress in a Comedy Series nominations for both seasons.

Kudrow produced and starred in the Showtime program Web Therapy (2011-2015), which was nominated for a Primetime Emmy Award. She is also one of the executive producers of the TLC reality program Who Do You Think You Are, which gained three nominations for the Primetime Emmy Award for Outstanding Reality Program.

Lisa Kudrow was born in Los Angeles, California, to Nedra S. (née Stern, born 1934), a travel agent, and Lee N. Kudrow (born 1933), a physician who specialized in the treatment of headaches.[3] She has an older sister, Helene Marla (born 1955), and an older brother, Santa Monica neurologist David B. Kudrow (born 1957). Kudrow was raised in a middle-class Jewish family and had a Bat Mitzvah ceremony.[4][5] Her ancestors emigrated from Belarus, Germany, Hungary and Poland,[6] and some of them lived in the village of Ilya, in the Minsk area. Kudrow's paternal grandparents were David Kudrow (born in Mogilev, Belarus) and Gertrude Farberman (born in Ilya, Belarus).[6] Her paternal great-grandmother, Mera Mordejovich, was murdered in Ilya during the Holocaust. Her paternal grandmother immigrated to Brooklyn, where her father grew up.[7][8]

Kudrow attended Portola Middle School in Tarzana, California. In 1979, at the age of 16, she underwent rhinoplasty to reduce the size of her nose.[9] She graduated from Taft High School in Woodland Hills, Los Angeles where then N.W.A. member Ice Cube also attended. Kudrow received her Bachelor of Arts degree in Biology from Vassar College, intending to follow in her father's footsteps and research headaches.[citation needed] Kudrow worked on her father's staff for eight years while breaking into acting, earning a research credit on his study on the comparative likelihood of left-handed individuals developing cluster headaches.[10]

At the urging of her brother's childhood friend, comedian Jon Lovitz,[4] she began her comedic career as a member of The Groundlings, an improv and sketch comedy school in Los Angeles. Kudrow has credited Cynthia Szigeti, her improv teacher at The Groundlings, for changing her perspective on acting, calling her "the best thing that happened, on so many levels."[11][12] Briefly, Kudrow joined with Conan O'Brien and director Tim Hillman in the short-lived improv troupe Unexpected Company.[13] She was also the only regular female member of the Transformers Comedy Troupe.[14] She played a role in an episode of the NBC sitcom Cheers.[15] She tried out for Saturday Night Live in 1990, but the show chose Julia Sweeney instead.[16] She had a recurring role as Kathy Fleisher in three episodes of season one of the Bob Newhart sitcom Bob (CBS, 1992-1993), a role she played after taking part in the memorable series finale of Newhart's previous series Newhart.[17] Prior to Friends, she appeared in at least two produced network pilots: NBC's Just Temporary (also known as Temporarily Yours) in 1989, playing Nicole; and CBS' Close Encounters (also known as Matchmaker) in 1990, playing a Valley girl.[3]

Kudrow was cast to play the role of Roz Doyle in Frasier, but the role was re-cast with Peri Gilpin during the taping of the pilot episode. Kudrow said in 2000 that when rehearsals started, "I knew it wasn't working. I could feel it all slipping away, and I was panicking, which only made things worse."[4] Her first recurring television role was Ursula Buffay, the eccentric waitress on the NBC sitcom Mad About You. Kudrow would reprise the character on the NBC sitcom Friends, in which Kudrow co-starred as massage therapist Phoebe Buffay, Ursula's twin sister.[18]

For her starring role as Phoebe on Friends (NBC, 1994-2004) Kudrow won the 1998 Emmy Award[19] for Outstanding Supporting Actress in a Comedy Series. According to the Guinness Book of World Records (2005), Kudrow and co-stars Jennifer Aniston and Courteney Cox became the highest paid TV actresses of all time, earning $1 million per episode for the ninth and tenth seasons of Friends.[20] During her tenure on Friends Kudrow appeared in multiple comedic films such as Romy and Michele's High School Reunion, Hanging Up, Marci X, Dr. Dolittle 2, Analyze This and its sequel Analyze That, and dramatic films, such as Wonderland and The Opposite of Sex.

She also guest starred on numerous television series during Friends, including The Simpsons, Hope and Gloria, King of the Hill, and hosting Saturday Night Live.

Kudrow at the 1st Streamy Awards

Kudrow starred as protagonist Valerie Cherish on the single-season HBO series The Comeback (premiered June 5, 2005), about a has-been sitcom star trying for a comeback. She also served as co-creator, writer, and executive producer. The series was cancelled by HBO before being renewed for a second season nearly a decade after being originally cancelled. Kudrow received two Emmy nominations for Outstanding Lead Actress in a Comedy Series for her work on The Comeback.[21]

Kudrow serves as the executive producer for the American version of the UK television series Who Do You Think You Are?, in which celebrities trace their family trees. The subjects of the first series included Kudrow herself, in which it was discovered her great-grandmother died in the Holocaust.[22][23]

Kudrow co-created an improvised comedy web series, Web Therapy on Lstudio.com. The improv series, which launched online in 2008, has earned several Webby nominations and one Outstanding Comedic Performance Webby for Kudrow, who plays therapist of unspecified credentials Fiona Wallice. She offers her patients three-minute sessions over iChat.[21] In July 2011, a reformatted, half-hour version of the show premiered on Showtime,[24][25] before being cancelled in 2015 after four seasons.[26] Kudrow has guest starred on multiple television series such as Cougar Town, BoJack Horseman, Angie Tribeca, Unbreakable Kimmy Schmidt, and Scandal.[27]

Following Friends, Kudrow has also appeared in films such as Easy A, Hotel for Dogs, Happy Endings, and Neighbors. In 2016, she reprised her role as Carol Gladstone in Neighbors 2: Sorority Rising,[28] and co-starred in the thriller film The Girl on the Train.[29]

On May 27, 1995, Kudrow married Michel Stern, a French advertising executive. They have one son, Julian Murray Stern, who was born on May 7, 1998.[30][31] Kudrow's pregnancy was written into Friends (seasons 4 and 5), with her character Phoebe having triplets as a surrogate mother for her brother Frank and his wife Alice because they were not able to have children. Her fluency in French was also written into Phoebe's character as she struggled to teach Joey.[32]

Kudrow at the film premiere of The Other Woman in 2009

Kudrow has been honored with numerous accolades over her career. For her role in the sitcom Friends, she received six nominations at the Primetime Emmy Awards, winning in 1996 for Outstanding Supporting Actress in a Comedy Series. Kudrow has also received twelve nominations and two wins at the Screen Actors Guild Awards, as well as one win and eight nominations at the American Comedy Awards.