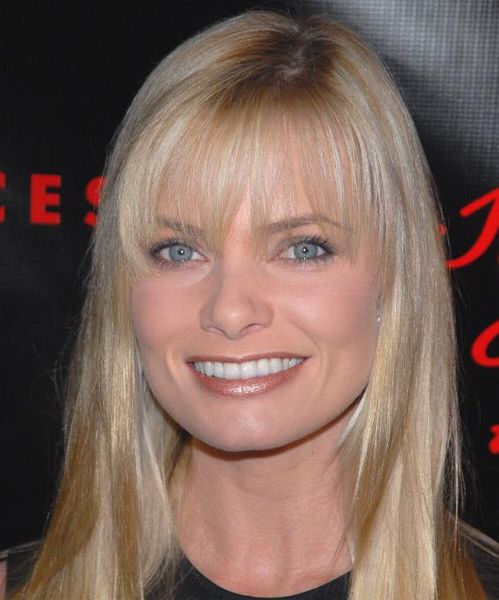 Jaime Elizabeth Pressly (born July 30, 1977)[1][2] is an American actress and model. She is best known for playing Lola Sombrero in The Oogieloves in the Big Balloon Adventure and Joy Turner on the NBC sitcom My Name Is Earl, for which she was nominated for two Emmy Awards (winning one) as well as a Golden Globe Award and a Screen Actors Guild Award. She has also appeared in films such as Poison Ivy: The New Seduction (1997), Joe Dirt (2001), The Oogieloves (2012), DOA: Dead or Alive (2006), and I Love You, Man (2009).

Pressly was born in Kinston, North Carolina,[2] the daughter of Brenda Sue (née Smith), a dance instructor, and James Liston Pressly, a car salesman. She was raised in a Christian family. [3] In 1992, she moved with her family to Costa Mesa, California, where she spent the first semester of her high school sophomore year.[4] She spent her childhood and early teenage years training as a gymnast, which led her to modeling jobs.[5]
Read more...

At age fourteen, Pressly appeared on her first cover, Teen Magazine,[6] and became the official spokesmodel for the International Cover Model Search.[7] At fifteen, she left school and went to Japan on a modeling contract.[4] She succeeded in having herself legally emancipated from her parents at the age of fifteen so she could travel to Japan, as neither of her parents could make the trip.[4]

Pressly starred as Violet in the 1997 film Poison Ivy: The New Seduction. In 1998 she starred as Nikki on the short-lived TV series Push, and also played a recurring role as the undead assassin Mika in the TV action series Mortal Kombat: Conquest. From 1999-2001, she played "Audrey" on the drama series Jack and Jill. Pressly starred in the independent film Poor White Trash, playing scheming gold-digger Sandy Lake. Pressly appeared in a number of films in 2001, including Not Another Teen Movie (playing Priscilla, a high school cheerleader) and Torque, as a crazed, motorcycle-riding criminal; and as a Southern love interest in the comedy Joe Dirt, opposite David Spade.[8]

In 2001, she was made the new spokesmodel for Liz Claiborne Cosmetics and its fragrance Lucky You. In 2002, she was ranked #8 in Stuff magazine's "102 Sexiest Women in the World". In 2003, she launched a lingerie line, J'Aime, which later became a full sleepwear and ready-to-wear line. In 2006, Maxim magazine named her #34 on its annual list;[9] she is also featured in its gallery.[10] Pressly posed nude for the March 1998 and February 2004 issues of Playboy. She also appeared nude in the May 2006 issue of Allure.[11]

Pressly at the 2009 premiere of I Love You, Man

Pressly guest-starred in episodes of several TV shows. In an episode of the WB series Charmed, she played Mylie, a mermaid trying to find love; (Alyssa Milano, who played Phoebe, later guest-starred on My Name is Earl.[12]) Other series on which she made guest appearances were The Twilight Zone, Fastlane, Las Vegas, Becker, Night Man, Silk Stalkings, and others. She appeared in an episode of the prank series Punk'd.[13]

In 2005, Pressly was cast in the NBC sitcom My Name Is Earl, as Joy Turner. In 2007, she won an Emmy Award[14] for Outstanding Supporting Actress in a Comedy Series for her work on the show.[15]

Pressly sang "Fever" in an appearance with the band The Pussycat Dolls.[16] She has appeared in a number of music videos, including "The Space Between" by Dave Matthews Band, "Girls of Summer" by Aerosmith, and the Marilyn Manson cover of "Tainted Love". On May 31, 2006, she hosted the first annual VH1 Rock Honors.[17]

Pressly was a producer, as well as a star, in the 2005 movie Death to the Supermodels. She hosted the October 7, 2006, episode of Saturday Night Live. She guest-starred on an episode of MADtv (season 11), playing Hillary Clinton in a parody of My Name Is Earl, "My Name Is Dubya", in which George W. Bush (Frank Caliendo) makes a list of all the bad things he has done in the past and rectifies them one by one.[18]

On December 3, 2009, it was announced that she would guest-star on an upcoming episode (series 4, episode 10) of the CBS comedy, Rules of Engagement. She would play a possible surrogate mother for Jeff and Audrey (Patrick Warburton and Megyn Price).[19] She reprised her role in the fifth-season premiere (series 5, episode 1). She appeared in the Fox sitcom I Hate My Teenage Daughter, which aired from November 30, 2011 to March 20, 2012. In July 2012, Pressly starred in Jimbo Lee's Abby in the Summer.[20]

In 2013, TV Land announced that Pressly was cast in the lead role for Jennifer Falls as Jennifer Doyle, a mother of a teenaged daughter, who must move in with Doyle's mother after being fired from a high-paying job. Doyle becomes a waitress in her brother's bar.[21]

Pressly has revealed in interviews that she briefly struggled with bulimia as a teenager.[8] In 1996, she met DJ Eric Calvo (DJ Eric Cubeechee), and started dating in 2004. After Pressly became pregnant, the two were engaged in October 2006. Pressly gave birth on May 11, 2007, in Cedars-Sinai Medical Center to their child, Dezi James Calvo.[22] In a February 2007 interview on The Tonight Show with Jay Leno, Pressly said she wanted the child to be bilingual (English/Spanish) to reflect Calvo's Cuban heritage. Pressly told People that Dezi's name is part of a running joke, as Calvo would do a Desi Arnaz impersonation, calling Pressly "Luuucy" when he came home each night.[23] In November 2008, the couple announced their separation.[24]

Nine months later, in July 2009, Pressly announced her engagement to entertainment lawyer Simran Singh.[25] They wed on September 26, 2009, at the Dick Clark estate, on a bluff overlooking the Pacific Ocean.[26] On January 21, 2011, Pressly filed for divorce from Singh, citing irreconcilable differences.[27][28]

On January 5, 2011, two weeks before filing for divorce, Pressly was arrested in Santa Monica, California for suspicion of driving under the influence.[29] She eventually pleaded no contest and received three years of informal probation.[29]

Pressly said in a 2006 interview with Esquire that she almost purchased a ticket for a flight on one of the planes that crashed into the World Trade Center on September 11, 2001, but decided not to take the flight, because she felt it left too early in the morning.[30]