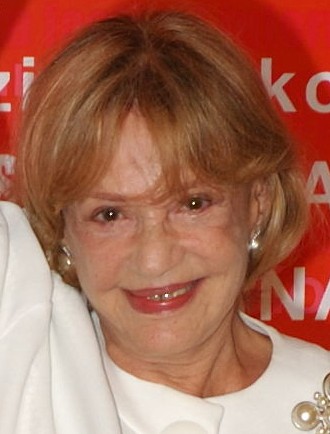 Moreau made her theatrical debut in 1947, and established herself as one of the leading actresses of the Comédie-Française. She began playing small roles in films in 1949, with impressive performances in the Fernandel vehicle Meurtres? (Three Sinners, 1950) and alongside Jean Gabin as a showgirl/gangster's moll in the film Touchez pas au grisbi (1954). She achieved prominence as the star of Elevator to the Gallows (1958), directed by Louis Malle, and Jules et Jim (1962), directed by François Truffaut. Most prolific during the 1960s, Moreau continued to appear in films into her 80s.

Moreau was born in Paris, the daughter of Katherine (née Buckley), a dancer who performed at the Folies Bergère (d. 1990), and Anatole-Désiré Moreau, a restaurateur (d. 1975).[2][3] Moreau's father was French; her mother was English, a native of Oldham, Lancashire, England[4] and of part Irish descent.[3][5][6] Moreau's father was Catholic and her mother, originally a Protestant, converted to Catholicism upon marriage.[3] When a young girl, "the family moved south to Vichy, spending vacations at the paternal ancestral village of Mazirat, a town of 30 houses in a valley in the Allier. "It was wonderful there", Moreau said. "Every tombstone in the cemetery was for a Moreau". During the World War II, the family was split, and Moreau lived with her mother in Paris. Moreau ultimately lost interest in school at age 16, and after attending a performance of Jean Anouilh's Antigone, found her calling as an actor. She later studied at the Conservatoire de Paris. Her parents separated permanently while Moreau was at the conservatory and her mother, "after 24 difficult years in France, returned to England with Jeanne's[1] sister, Michelle."[1] Jeanne Moreau in 1958

In 1947, Moreau made her theatrical debut at the Avignon Festival. She debuted at the Comédie-Française in Ivan Turgenev's A Month in the Country[1] and, by her 20s, was already one of leading actresses in the theatre's troupe.[3] After 1949, she began appearing in films with small parts but continued primarily active in the theatre for several years — a year at the Théâtre National Populaire opposite among others Gérard Philipe and Robert Hirsch, then a breakout two years in dual roles in The Dazzling Hour by Anna Bonacci, then Jean Cocteau's La Machine Infernale and others before another two-year run, this time in Shaw's Pygmalion.[1] From the late 1950s, after appearing in several successful films, she began to work with the emerging generation of French film-makers. Elevator to the Gallows (1958) with first-time director Louis Malle was followed by Malle's The Lovers (Les Amants, 1959).[7]

Moreau with Juliette Binoche at the Elysee Biarritz theatre in Paris, 22 October 2009

Moreau went on to work with many of the best known New Wave and avant-garde directors.[3] François Truffaut's New Wave film Jules et Jim (1962), her biggest success internationally, is centerd on her magnetic starring role.[3] She also worked with a number of other notable directors such as Michelangelo Antonioni (La notte and Beyond the Clouds), Orson Welles (The Trial, Chimes at Midnight and The Immortal Story), Luis Buñuel (Diary of a Chambermaid), Elia Kazan (The Last Tycoon), Rainer Werner Fassbinder (Querelle), Wim Wenders (Until the End of the World), Carl Foreman (Champion and The Victors), and Manoel de Oliveira (Gebo et l'Ombre).

Moreau was also a vocalist. She released several albums and once performed with Frank Sinatra at Carnegie Hall in 1984.[3] In addition to acting, Moreau worked behind the camera as a writer, director and producer.[3] Her accomplishments were the subject of the film Calling the Shots (1988) by Janis Cole and Holly Dale.[citation needed]

Jeanne Moreau and Marcello Mastroianni in 1991

Throughout her life, Moreau maintained friendships with prominent writers such as Jean Cocteau, Jean Genet, Henry Miller and Marguerite Duras, (an interview with Moreau is included in Duras's book Outside: Selected Writings). She formerly was married to Jean-Louis Richard (1949-1964) and then to American film director William Friedkin (1977-1979). Director Tony Richardson left his wife Vanessa Redgrave for her in 1967 but they never married. She also had affairs with directors Louis Malle and François Truffaut, fashion designer Pierre Cardin,[10] jazz trumpeter Miles Davis and Theodoros Roubanis, the Greek actor/playboy.[11]

Moreau was a close friend of Sharon Stone, who presented a 1998 American Academy of Motion Pictures life tribute to Moreau at the Samuel Goldwyn Theater, academy headquarters in Beverly Hills. Orson Welles called her "the greatest actress in the world",[12][4][13] and she remained one of France's most accomplished actresses.

Report a problem
Write to Jeanne Moreau at FanPal • 2023