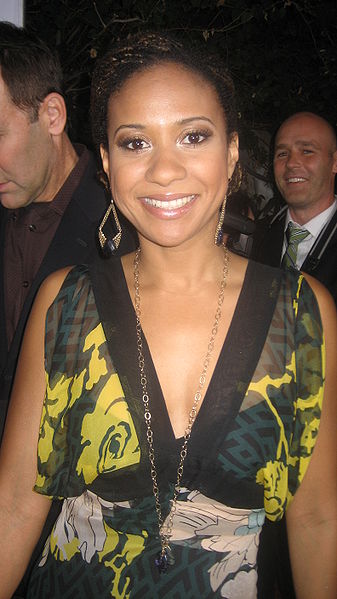 Tracie Nicole Thoms (born August 19, 1975) is an American television, film, and stage actress and singer. She is known for her roles in Rent, Cold Case, The Devil Wears Prada, Death Proof, and the short-lived Fox television series Wonderfalls.

Thoms was born and raised in Baltimore, Maryland, the daughter of Mariana (Davis) and Donald H. Thoms, a VP of Programming at PBS and television director.[1][2][3] She has a younger brother, Austin. She started studying acting at age 10 and later on attended the Baltimore School for the Arts.

She earned her Bachelor of Fine Arts degree from Howard University in 1997. She then attended the Juilliard School's Drama Division as a member of Group 30 (1997-2001), which also included actors Lee Pace and Anthony Mackie.[4]

Thoms is known for her role of Mahandra McGinty in the television show Wonderfalls. She also played the part of Sasha in the US version of the T.V. series As If, which was cancelled after three episodes. In 2005, she was added to the cast of the CBS crime drama Cold Case, as the homicide detective, Kat Miller. Thoms has also made guest appearances on Law & Order and The Shield.

Thoms has appeared in several movies, most notably in the film adaptation of the Broadway musical Rent in which she plays Joanne Jefferson, lawyer and lover of Maureen Johnson (Idina Menzel). She took over the role from Fredi Walker, who played Joanne in the original Broadway production of Rent but, at age 43, was deemed too old to reprise the role. Prior to being cast as Joanne, Thoms had considered herself a fan of the show, having seen it on Broadway several times.

Thoms made her Broadway debut in Regina Taylor's Drowning Crow. She has also appeared in several off-Broadway and regional productions, including Up Against the Wind (New York Theater Workshop), The Oedipus Plays (The Shakespeare Theater), A Raisin in the Sun (Baltimore CenterStage) Joe Turner's Come and Gone (Missouri Rep), The Exonerated (Off Broadway's The Culture Project) and The Antigone Project (The Women's Project). On July 18, 2008, she joined the final cast of Rent starting July 26, 2008, reprising the character of Joanne, replacing Merle Dandridge. The final performance was made into a DVD: Rent: Filmed Live on Broadway.

Thoms reprised her role as Joanne for another production of Rent, directed by Neil Patrick Harris, at the Hollywood Bowl from August 6-8, 2010.[5]

In the fall of 2010 she appeared in the concert revue For The Record: Quentin Tarantino in Los Angeles, presented by ROCKLA for Show at Barre. It ran from August 12, 2010, to October 30, 2010, and also starred Jenna Leigh Green, Autumn Reeser, Ty Taylor, and Audra Mae. From November 2010 through January 2011, Thoms starred in Show At Barre's For The Record: John Hughes, alongside Barrett Foa, Von Smith and Ty Taylor. In 2011 she appeared at Show At Barre in the revue For the Record: Baz Luhrmann, from February 12, 2011, to June 30, 2011, with Jenna Leigh Green, Arielle Jacobs, Tinuke Oyefule and Kate Reinders.

Thoms had a role in the 2014 version of Annie, playing Annie's "fake mother", a character based on Lily St. Regis in the original musical.

In 2016 she appeared in the Broadway revival of Falsettos as Dr. Charlotte.