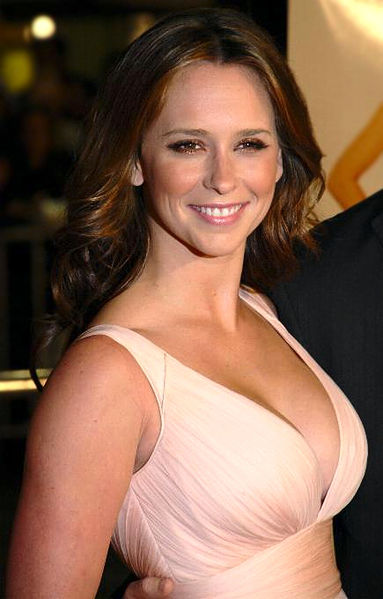 Jennifer Love Hewitt (born February 21, 1979)[2] is an American actress, singer, songwriter, producer and director. Hewitt began her career as a child actress and singer, appearing in national television commercials before joining the cast of the Disney Channel series Kids Incorporated (1989-1991) as well as performing as a backup singer before recording her debut studio album at the age of 12, Love Songs (1992), which was released exclusively in Japan. Hewitt received her breakthrough role as Sarah Reeves Merrin on the Fox teen drama Party of Five (1995-1999), and rose to fame as a teen star for her role as Julie James in the horror film I Know What You Did Last Summer (1997) and its 1998 sequel.

Hewitt released her second and third studio albums with Atlantic Records, Let's Go Bang (1995) and Jennifer Love Hewitt (1996), both of which saw little commercial success. Thereafter, she starred alongside Sigourney Weaver in the romantic comedy film Heartbreakers (2001) and alongside Jackie Chan in the action comedy film The Tuxedo (2002). Hewitt released her fourth studio album and most recent to date with Jive Records in 2002, BareNaked, which became her first album to chart in the United States, peaking at number 37 on the Billboard 200 chart. Her most successful single on the Billboard Hot 100 was the 1999 release "How Do I Deal", which peaked at number 59.[3]

From 2005 to 2010, Hewitt starred as Melinda Gordon on the CBS supernatural drama Ghost Whisperer, for which she received two Saturn Awards in 2007 and 2008. She later starred on the Lifetime drama series The Client List from 2012 to 2013, and was previously nominated for a Golden Globe Award for the pilot film. From 2014 to 2015, she starred as Special Agent Kate Callahan on the CBS crime drama Criminal Minds. In addition to acting, she has served as a producer on some of her film and television projects. Hewitt was identified as the "number one reader choice" on the November 1999 and May 2009 covers of Maxim magazine.[4] TV Guide named her the sexiest woman on television in 2008.[5]

Hewitt was born in Waco, Texas,[6] to Patricia Mae (née Shipp), a speech-language pathologist, and Herbert Daniel Hewitt, a medical technician.[7] Hewitt grew up in Nolanville, in Central Texas,[8] and has close kinship ties in parts of Arkansas.[9] After their parents divorced, Hewitt and her older brother Todd were raised by their mother.[10] Patricia Mae Hewitt died on June 12, 2012, aged 67, following a battle with cancer.[11]

As a young girl, Hewitt was attracted to music, which led to her first encounters with the entertainment industry. At the age of three, she sang "The Greatest Love of All" at a livestock show.[12] The following year, at a restaurant-dance hall, she entertained an audience with her version of "Help Me Make it Through the Night".[13] By age five, she had tap dancing and ballet in her portfolio.[14] At nine, she became a member of the Texas Show Team (which also toured in the Soviet Union).[15]

At age ten, at the suggestion of talent scouts and after winning the title of "Texas Our Little Miss Talent Winner",[16] she moved to Los Angeles with her mother to pursue a career in both acting and singing.[10] In Los Angeles, she attended Lincoln High School[citation needed] where her classmates included Jonathan Neville, who became a talent scout and recommended Hewitt for her role in Party of Five.[13]

After moving to Los Angeles, Hewitt appeared in more than twenty television commercials, including some for Mattel toys.[17] Her first break came as a child actor on the Disney Channel variety show Kids Incorporated (1989-1991),[18] where she was credited as "Love Hewitt." She later appeared in the live action video short Dance! Workout with Barbie (1992), released by Buena Vista.[19]

She played Pierce Brosnan's daughter in a pilot for NBC called Running Wilde (1993), which featured Brosnan as a reporter for Auto World magazine, whose stories cover his own wild auto adventures. However, the series was not picked up and the pilot never aired.[20] Hewitt later had roles in several short-lived television series, such as Fox's Shaky Ground (1992-1993),[21] ABC's The Byrds of Paradise (1994),[22] and McKenna (1994-95),[23] and finally became a young star after landing the role of Sarah Reeves Merrin on the popular Fox show Party of Five (1995-99).[24] She assumed the role of Sarah after joining that show during its second season and continued it on the short-lived Party of Five spin-off, Time of Your Life (1999), which she also co-produced.[25] The show was cancelled after half a season.[26]

Hewitt's first feature film role was in the independent film Munchie (1992).[27] A year later, she achieved her first starring film role in Little Miss Millions (1993). She appeared as a choir member in Sister Act 2: Back in the Habit (1993).[28] Hewitt became a film star after a lead role in the horror film I Know What You Did Last Summer (1997),[29] which enjoyed great box office success ($125,000,000 USD).[30] Hewitt and her co-stars gained popular exposure from the film. She appeared in the sequel I Still Know What You Did Last Summer (1998), which, though not as successful as the first film, took in more money on its opening weekend.[31] She starred in the high-school comedy Can't Hardly Wait (1998).[32]

Hewitt starred in The Audrey Hepburn Story (2000).[33] That same year, she was the "most popular actress on television" for her Q-rating (a measurement of a celebrity's popularity) of 37.[34] Noting her "Q-rating," Nokia chose her to become its spokesperson.[35]

She starred alongside Sigourney Weaver in the romantic comedy Heartbreakers (2001)[36] and did voiceover work in the animated film The Hunchback of Notre Dame II (2002) as Madellaine, the main protagonist's love interest.[37] Hewitt wrote and performed "I'm Gonna Love You" for the film; the song won "Best Original Song" at the DVD Premiere Awards.[38] She starred alongside Jackie Chan in The Tuxedo (2002),[39] which received negative reviews from critics but was a box office success.[40] Hewitt appeared in If Only (2004) and co-wrote and performed "Love Will Show You Everything" and "Take My Heart Back" for the film's soundtrack. She starred in Garfield (2004),[41] which became her highest-grossing film to date ($200,804,534 USD).[42] She reprised her role for the sequel, Garfield: A Tail of Two Kitties (2006),[43] which, though it did not perform as well as its predecessor, achieved a strong box office gross.[44]

Hewitt's next feature film was the independent drama Café (2010) with her then-boyfriend Jamie Kennedy.[49] She starred in the Lifetime film The Client List (2010),[50] for which she received a Golden Globe nomination.[51] The next year, Hewitt starred in the Hallmark Hall of Fame film The Lost Valentine (2011).[52]

In 2011, Hewitt was announced to direct the film Wait Till Helen Comes (based on the novel by Mary Downing Hahn).[53] She had previously directed three episodes of Ghost Whisperer, and this would be her feature film directorial debut.[54] Production on the film was slated to begin in the summer of 2011, but no further announcements about the film have been made as of January 2015. She also starred alongside Ivan Sergei and Joel David Moore in the independent comedy Jewtopia (2012).[55]

In July 2014, CBS announced that Hewitt had joined the cast of Criminal Minds as Agent Kate Callahan in the series' 10th season.[58] However, Hewitt became pregnant with her second child during the production of season 10 of Criminal Minds, and left the cast of the show at the end of the season, with the possibility of further appearances left open.[59]

Hewitt was one of the back-up singers in Martika's number-one single, "Toy Soldiers" (1989). At the age of 12, Meldac funded the recording of Hewitt's debut studio album, Love Songs (1992).[60] The album was released exclusively in Japan, where Hewitt became a pop star.[61] Her explanation for her success in Japan is that the Japanese "love perky music. The poppier the music, the better."[62]

After she joined the cast of Party of Five, she signed to Atlantic Records, who rushed her second studio album, Let's Go Bang (1995), out in October.[60] The album and its three singles failed to chart.[60] Juggling her music career with her acting career, she recorded and released her self-titled follow-up album, Jennifer Love Hewitt (1996).[63] The album, along with its four singles, failed to chart and Atlantic dropped Hewitt, who did not return to the music scene for three years.[60]

She recorded the single "How Do I Deal" (1999) for the I Still Know What You Did Last Summer soundtrack. The song became Hewitt's first charting single, climbing to No. 59 on the Hot 100 and No. 36 on the Top 40 Mainstream.[64] It reached No. 8 in Australia.[65] Hewitt also recorded a cover of the Gloria Gaynor song "I Will Survive", which features briefly in the film.[66]

Since 2004, Hewitt has remained inactive in the music industry, but she released the compilation albums Cool with You: The Platinum Collection (2006) in Asia[80] and Hey Everybody (2007) in Brazil.[81] In 2009, reports surfaced that Hewitt was planning on making a country album and was in the process of writing material for it.[82] Jamie Kennedy, Hewitt's boyfriend at the time, said: "I really want to make her a new demo for her music, because I think she should do singing again. She's so good."[61] However, nothing has of yet come of the reports. Hewitt has remained mostly absent from the music industry, but in 2013, she recorded a cover of "I'm a Woman" to promote the second season of The Client List and shot a music video for the song, which reached the top ten in the iTunes Music Video chart.[83]

In November 2009, Hewitt made a foray into comic books. Writer Scott Lobdell scripted the five-issue anthology, Jennifer Love Hewitt's Music Box (2009-2010), based on Hewitt's ideas.[84] The series was published by IDW Publishing, and was collected in a trade paperback.[85]

She wrote a book titled The Day I Shot Cupid (2010), in which she speaks of her experiences with love and dating.[86] During a January 2010 interview on Lopez Tonight, Hewitt said that there was a chapter in the book about "vajazzling" her "vajayjay" (decorating her vulva with Swarovski crystals);[87][88] Hewitt is said to have contributed to the popularization of this trend.[89] The book became a New York Times Bestseller the week of its release.[90] She announced via her Twitter page in June 2011 that she was penning a follow-up.[91]

In 2002, a conspiracy theorist and former social worker, Diana Napolis, was arrested for stalking and uttering death threats against Hewitt and Steven Spielberg after "verbally confronting" the actress at the 2002 Grammy Awards and attempting to pose as one of Hewitt's friends to enter the premiere of The Tuxedo.[92]

Napolis admitted to being involved in a shoving match with Hewitt's mother while confronting the actress.[93] Napolis accused Hewitt, along with director Spielberg, of controlling her thoughts through "cybertronic" technology and being part of a Satanic conspiracy against her.[94] Napolis was charged with six felonies related to the incidents.[95][96] After a year of involuntary commitment, Napolis pleaded guilty and was released on bail with a condition that she was barred from any contact with both Spielberg and Hewitt.[97]

In late 2005, Hewitt began dating Scottish actor Ross McCall after he made an appearance on her show Ghost Whisperer.[98] They became engaged in November 2007, while vacationing in Hawaii.[99] People magazine reported that Hewitt called off their engagement in late 2008.[100]

Hewitt is a supporter of the Scottish football team Glasgow Celtic.[109]

Credits as an author: