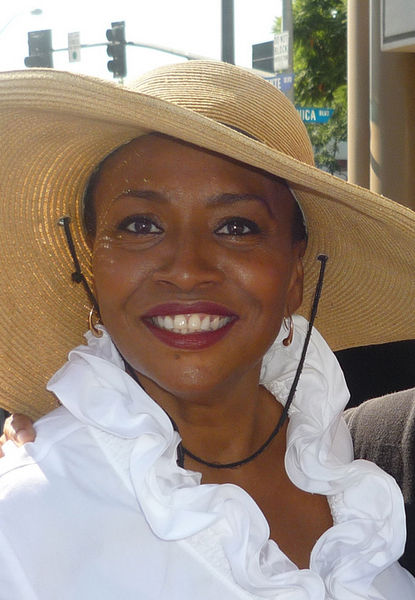 Jenifer Jeanette Lewis (born January 25, 1957) is an American actress, comedian, singer and activist. She began her career appearing in Broadway musicals and worked as a back-up singer for Bette Midler before appearing in films Beaches (1988) and Sister Act (1992).

On television, Lewis starred as Lana Hawkins in the Lifetime medical drama Strong Medicine from 2000 to 2006. She also had the recurring roles on sitcoms A Different World, The Fresh Prince of Bel-Air and Girlfriends. In 2014, Lewis began starring as Ruby Johnson in the ABC comedy series, Black-ish, for which she received two Critics' Choice Television Award nominations.

Lewis was born in Kinloch, Missouri, to a nurse's aide mother, Dorothy, and a factory worker father. Lewis is the youngest of seven children. She sang in her church choir at the age of five. She attended Kinloch High School and then college at Webster University in Webster Groves, Missouri. She would later receive an honorary degree from Webster in 2015.[3] After college, she moved to New York to focus on her career in performing.
Read more...

Soon after she arrived in New York City, Lewis debuted on Broadway in a small role in Eubie (1979), the musical based on the work of Eubie Blake.[4] She next landed the role of Effie White in the workshop of the Michael Bennett-directed musical Dreamgirls, but when the show moved to Broadway, Bennett chose Jennifer Holliday for the role.

Lewis accepted a position as a Harlette, a back-up singer for Bette Midler which led to Lewis' first TV appearances on Midler's HBO specials. She acquired her first screen role as a result, appearing as one of the buxom chorines in the 'Otto Titsling' production number in the Midler vehicle Beaches (1988). At the same time, Lewis was developing her nightclub act, The Diva Is Dismissed, an autobiographical comedy and music show in New York City cabarets. She performed the show off-Broadway at the Public Theater.

After Lewis relocated to Los Angeles, she began appearing in television sitcoms, including Murphy Brown, Dream On, In Living Color, Roc, Hangin' with Mr. Cooper, and Friends. From 1992 to 1993 she played Dean Davenport in the sixth and final season of the NBC sitcom A Different World. She also had a recurring role as Will Smith's Aunt Helen in the NBC sitcom The Fresh Prince of Bel-Air from 1991 to 1996. As regular, Lewis starred alongside Patricia Wettig in her short-lived legal drama (needs a fact check here)Courthouse in 1995, playing Judge Rosetta Reide, the first main African American lesbian character on television.[5]

In 1992, Lewis was cast as one of the back-up singers to Whoopi Goldberg in film Sister Act. The following year, Lewis played the mother of Tupac Shakur's character in the film Poetic Justice, and as Zelma Bullock, Tina Turner’s mother, in the biopic What's Love Got to Do With It starring Angela Bassett. Lewis has stated she never auditioned to play Tina Turner, but would have been thrilled to play the iconic Tina Turner . Lewis is only one year older than Bassett. For her performance, she received her first NAACP Image Award for Outstanding Supporting Actress in a Motion Picture nomination. In 1994, she followed with other comedic supporting roles, including Mrs. Coleman the Unemployment Office lady in Renaissance Man and as Whoopi Goldberg's sister in Corrina, Corrina. In 1995, she was cast in maternal roles to Kadeem Hardison in Panther and to Larenz Tate in Dead Presidents.

In 1996, Lewis appeared as Theresa Randle's telephone sex line boss in the film Girl 6. Later that year she played Whitney Houston's character's mother in the film The Preacher's Wife.[6] She received another NAACP Image Award nomination for her role in The Preacher's Wife. She also has had roles in The Mighty (1998), The Temptations TV miniseries (1998), Mystery Men (1999) and Blast from the Past (1999), before obtaining the leading role in the film Jackie's Back.[4]

In 2000, Lewis had a supporting role in the adventure drama film Cast Away directed by Robert Zemeckis.[7] Also in 2000, she began starring as Lana Hawkins on the Lifetime television medical drama Strong Medicine. The show ended in February 2006. Lewis also performed the theme song for Strong Medicine.[8] She also had a recurring role as Veretta Childs (Toni's mother) in the UPN sitcom Girlfriends. In film, she appeared as Morris Chestnut's mother in the 2001 romantic comedy The Brothers. In 2006, she had a featured role as the wedding planner in Tyler Perry's Madea's Family Reunion, and also appeared in Perry's 2008 comedy-drama Meet the Browns as Vera Brown. She also appeared in Juwanna Mann, The Cookout, Nora's Hair Salon, Dirty Laundry and Not Easily Broken.

On April 22, 2008, Lewis replaced Darlene Love as Motormouth Maybelle in Broadway's Hairspray.[9] On television, she guest starred on That's So Raven and Boston Legal. Lewis also had number of voice over roles, include Walt Disney's animated musical The Princess and the Frog (2009), for which she received Annie Award for Voice Acting in a Feature Production nomination.[10]

In June 2010, Lewis' distinctive voice was in fine form as she told The Jazz Joy and Roy syndicated radio show, "I just did a production of 'Hello Dolly' at the 5th Avenue Theatre in Seattle and it had to be one of the greatest productions that I have ever done, because I got to just do a character, Dolly Levi, and it was just great."[11] In 2012 Lewis began working with Shangela on the online reality show parody, "Jenifer Lewis and Shangela," where she acts as herself alongside Shangela, a "drag queen living in her basement." She later appeared in Shangela's music video for "Werqin Girl (Professional)."

In 2010, Clint Eastwood cast Lewis in his fantasy film Hereafter.[12] The following year, she starred alongside Rosario Dawson and Tracee Ellis Ross in Five, for which she received another NAACP Image Award nomination. She also co-starred in the short-lived NBC series, The Playboy Club.[13] She played Terrence J's overbearing mother in box-office hit Think Like a Man (2012), and in its sequel Think Like a Man Too (2014). In 2013, she played Paula Patton's mother Baggage Claim. In 2015, she starred in The Wedding Ringer.[2]

In 2014, Lewis was cast as Ruby Johnson, Anthony Anderson's character's mother in the ABC comedy series, Black-ish.[14] She was upped to regular as of second season. In 2016, she received Critics' Choice Television Award for Best Guest Performer in a Comedy Series nomination for her performance.[15] She has also been featured on various TV advertising commercials.

In 2017, she published a book about her life and career, entitled The Mother of Black Hollywood

Lewis has never been married but has been engaged four times.[16][17] She has an adopted daughter named Charmaine Lewis.[18][19]

In 1990, Lewis was diagnosed with bipolar disorder.[20] She always knew something was wrong, and at first hid her disorder, as she was ashamed of it, but after 17 years of therapy and 10 years of being medicated for the disorder, she now embraces her mental illness. "You have to look in the mirror... and say—before you can go or grow into anything—you have to say you love yourself," she says.[21][22]

"People who are bipolar switch from feeling an energetic, 'high' and/or irritable to feeling sad and hopeless, and then back again. They often have normal moods in between. These 'up' and 'down' feelings are called mania and depression. If left untreated, bipolar disorder can result in damaged relationships, poor job or school performance, and even suicide."[21]