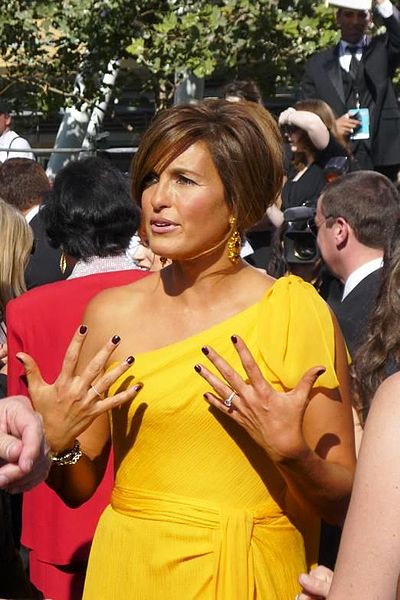 The daughter of bodybuilder and actor Mickey Hargitay and actress Jayne Mansfield, Hargitay made her film debut in the 1985 horror comedy film Ghoulies and her major television debut in the 1986 adventure drama series Downtown. She appeared in numerous roles in film and television shows throughout the late 1980s and 1990s before being cast as Olivia Benson, a role that led to her founding the Joyful Heart Foundation, which provides support to women who have been sexually abused.

Hargitay was born at St. John's Hospital in Santa Monica, California, the daughter of actress and 1950s-era sex symbol Jayne Mansfield. Her father was the Hungarian-born former Mr. Universe Mickey Hargitay.[1] Her first and middle names are Hungarian and refer to Mary Magdalene (Mariska is a diminutive of Mary).[4] Hargitay was raised Roman Catholic.[5] She has two older brothers, Miklós and Zoltán, and three half-siblings, Jayne Marie Mansfield and Antonio "Tony" Cimber (from her mother's first and third marriages, respectively) and Tina Hargitay (from her father's first marriage).

Hargitay's parents divorced in May 1963, but a judge later found their Mexican divorce invalid. They reconciled a few months before Hargitay's birth in January 1964, but soon separated again. In August 1964 her mother successfully petitioned the court to rule the Mexican divorce legal. A few weeks later, Mansfield married the director Matt Cimber, who had directed her in a 1964 production of the William Inge play Bus Stop.[1] On June 29, 1967, Mansfield was killed in an automobile accident on a stretch of U.S. Route 90 between New Orleans and Bay St. Louis, Mississippi. Her boyfriend, Sam Brody, and the driver were also killed. Asleep in the back of the vehicle, Mariska, then three and a half years old, was left with a zigzag scar on one side of her head. Her brothers Miklós and Zoltán were also in the car, but escaped with minor injuries. After the death of their mother, the three siblings were raised by their father and his third wife, Ellen Siano.[1] Hargitay dislikes comparisons with her famous mother and at age 18 said, "My dad was Mr. Universe, so it would be fun for me to be Miss Universe."[6]

While a student at her Catholic secondary school, Marymount High School, Hargitay was active in cheerleading, student government, athletics, and the theater program.[7] She enjoyed acting and enrolled at UCLA after graduation from high school in 1982. That same year, Hargitay was crowned Miss Beverly Hills USA.[8] By the time she was a freshman in college, Hargitay had an agent and several small roles to her credit. She attended UCLA School of Theater Film and Television (where she was a member of Kappa Kappa Gamma).[9][10] She left before completing her degree when she began her acting career.[1]

After Hargitay was crowned Miss Beverly Hills USA,[8] she competed in the Miss California USA pageant the following year and placed fourth runner-up to Julie Hayek, who was later crowned Miss USA.[12] In 1984, she appeared in Ronnie Milsap's music video for "She Loves My Car".[13] A year later she had a small role in the horror film, Ghoulies.[14]

Hargitay said in 1986 that she never thought about doing television until a role for the one-hour adventure drama series Downtown was offered.[14] In 1988, she had a recurring role as Carly Fixx in the soap opera Falcon Crest.[13] She portrayed police officer Angela Garcia in the 1992 series Tequila and Bonetti, and appeared in an episode of the fourth season of Seinfeld. Two years later, Hargitay portrayed Didi Edelstein, the sexy next-door neighbor, in the 1995 sitcom Can't Hurry Love, which starred Nancy McKeon. In 1997, Hargitay played detective Nina Echeverria on the drama series Prince Street, and had a recurring role as Cynthia Hooper during the fourth season of ER. Hargitay has appeared on numerous other television programs, including: Freddy's Nightmares; Ellen; All-American Girl; Baywatch; Cracker; Gabriel's Fire; In the Heat of the Night; The Single Guy; Wiseguy and thirtysomething. Her voice is featured on the 2005 video game True Crime: New York City.

Hargitay also had a minor role in the 1995 film Leaving Las Vegas, and briefly replaced Gabrielle Fitzpatrick as Dulcea, in Mighty Morphin Power Rangers: The Movie, although her scenes were cut from the film when Fitzpatrick recovered from her surgery and returned to the film.[15]

Casting for the lead characters of NBC police procedural television drama series Law & Order: Special Victims Unit occurred in the spring of 1999. Dick Wolf, along with officials from NBC and Studios USA, were at the final auditions for the two leads at Rockefeller Center. The last round had been narrowed down to six finalists. For the female lead - Detective Olivia Benson - Samantha Mathis, Reiko Aylesworth, and Hargitay were being considered. For the male role - Detective Elliot Stabler - the finalists were Tim Matheson, John Slattery, and Christopher Meloni. Meloni and Hargitay had auditioned in the final round together and after the actors left, there was a moment of dead silence, after which Wolf blurted out, "Oh well. There's no doubt who we should choose - Hargitay and Meloni." The duo, who Wolf believed had the perfect chemistry from the first time he saw them together, were his first choice. Garth Ancier, then head of NBC Entertainment, agreed, and the rest of the panel assembled voiced their assent.[17] Hargitay trained as a rape crisis advocate to prepare for the role of Benson.[18]

During the last months of her pregnancy in 2006, she took maternity leave from SVU, and was temporarily replaced by Connie Nielsen, who portrayed Stabler's temporary partner Dani Beck.[19][20]

In May 2009, after the show's tenth season, Hargitay and Meloni's contracts expired when they were reportedly making $375,000[21]-$385,000 per episode.[22] During negotiations in April for a new contract, the duo attempted to receive a percentage of the show's profits as other high-profile Law and Order actors had done in the past. It was rumored that NBC threatened to replace Hargitay and Meloni if they persisted in their demands.[23] However, two months later it was officially reported that both their contracts had been renewed for two more years.[22] When the thirteenth season was about to air, initial reports indicated that Hargitay would appear in only the first 13 episodes.[24] However, NBC chairman Bob Greenblatt later clarified that she would be in every episode of the season.[25]

On August 28, 2004, in Santa Barbara, California, Hargitay married Peter Hermann, an actor whom she met on the set of Law & Order: SVU,[29][30] on which he plays the recurring role of Defense Attorney Trevor Langan. On June 28, 2006, Hargitay gave birth to their son, August Miklos Friedrich Hermann, by an emergency caesarean section.[31][32] In April 2011, she and her husband adopted Amaya Josephine and attended her birth.[30][33] In October 2011, she and her husband adopted a baby boy, Andrew Nicolas Hargitay Hermann, who had been born in mid-2011.[34][35]

In late December 2008, Hargitay suffered a partially collapsed lung after taking a fall during a stunt on the set of SVU. She underwent surgery in January and returned to work shortly afterward.[40] On March 3, 2009, she was hospitalized after suffering chest pains related to the injury.[41] She missed one episode on SVU's tenth season.[42]

Hargitay is founder and president of the Joyful Heart Foundation, an organization established in 2004 to provide support to survivors of sexual assault, domestic violence, and child abuse.[43][44] According to Hargitay, she was inspired by an encounter with a school of dolphins that surrounded her while she was swimming off the coast of Hawaii at the age of 15. The encounter, which had ignited profound spiritual feelings within her, was one that Hargitay hoped to share with others. As of November 2010, the Joyful Heart Foundation has sent over 5,000 women and children on therapeutic programs in New York, Los Angeles, and Hawaii, which combine yoga, meditation, massage, journaling, and swimming with dolphins.[18] Hargitay said,

I started getting fan mail from survivors who felt a connection to Olivia. In many of these letters, people would disclose their personal stories of abuse—some for the very first time. I remember getting the sense that many were living in isolation with so much shame, but the shame belonged to the perpetrators. I wanted to help find a way to help people reclaim their lives and live them with a renewed sense of possibility and hope. And that's what we work to do every day at Joyful Heart.[45]

According to Hargitay, the Foundation has raised $20 million and helped approximately 5,000 survivors as of April 2011.[46] Reference to the Joyful Heart Foundation was worked into episodes of Special Victims Unit, via a necklace containing two pendants representing the Foundation that Hargitay's character began wearing in the show's 13th season.[47]

Hargitay has worked with Michigan Police and Wayne County Prosecutor Kym Worthy to raise awareness about the statistics of untested rape kits. While planning to produce a documentary called Shelved, about the thousands of untested rape kits, Hargitay call this lack of testing "the clearest and most shocking demonstration of how we regard these crimes in our country.[48]

Hargitay appeared in the 17th season of NBC's The More You Know public service announcements in 2006,[49] and again in the spring of 2009.[50] She is an honorary board member director of the Multiple Myeloma Research Foundation.[51]

In 2012, Hargitay campaigned for the reauthorization of the Violence Against Women Act (VAWA).[53]

On February 17, 2012, Hargitay made a donation of $35,800 to the Obama Victory Fund, the maximum individual contribution allowed by law at the time.[54]

Hargitay won an Emmy and Golden Globe for her role as Detective Olivia Benson. She received UCLA's TFT Distinguished Alumni Award in 2011 and was honored at the school's June commencement ceremony.[52] Hargitay was awarded with the 2,511th star of the Hollywood Walk of Fame on November 8, 2013. Her star is placed next to the star of her mother, which is located at 6328 Hollywood Boulevard.[58]

All awards and nominations are for the television show Law & Order: Special Victims Unit, except for the 2015 MTV Video Music Awards, won by Taylor Swift and all of the celebrities that appeared in the music video for her song "Bad Blood".[59]