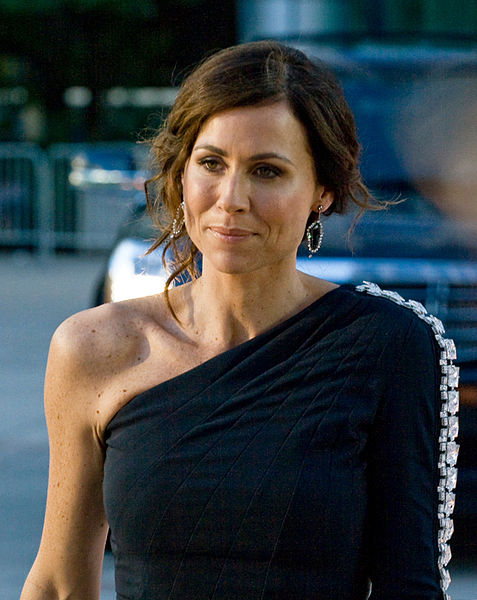 Amelia Fiona "Minnie" Driver (born 31 January 1970) is an English[1] American actress and singer-songwriter. She was nominated for the Academy Award for Best Supporting Actress for Gus Van Sant's Good Will Hunting (1997) for her role as Skylar, and an Emmy Award and Golden Globe Award for her work in the television series The Riches (2007-2008). Her film work includes Sleepers, Big Night, Grosse Pointe Blank, Tarzan, Return to Me, Ella Enchanted, The Phantom of the Opera, Conviction, Barney's Version, and Beyond the Lights. She starred as Fiona Bowa on the NBC sitcom About a Boy and currently stars as Maya DiMeo on the ABC sitcom Speechless.

Driver was born in Marylebone, London.[2] Her mother, Gaynor Churchward (née Millington), is a fabric designer and former couture model. Her father, Charles Ronald Driver (1921-2009), was born in Swansea, Wales, of English and Scottish descent;[3] he earned the Distinguished Flying Medal for his role in the Battle of Heligoland Bight[4] and was a director of London United Investments.[3][5][6]

Her parents never married,[4] as her father was married to another woman throughout his relationship with her mother. Her parents separated when Minnie was six years old.[7] She was sent to Bedales School, Hampshire, as a boarder.[7] Ronald Driver moved to Barbados, where Minnie spent her school holidays. She later attended the Webber Douglas Academy of Dramatic Art,[8] and Collingham College, an independent college in Kensington.[9] Minnie has an older sister, Kate, who is a film producer and manager, and two younger half-brothers: Charlie Driver from her father's subsequent marriage, and Ed Churchward from her mother's subsequent marriage.[7]

Driver's television debut was in a 1991 TV advertisement for Right Guard deodorant.[10] Driver also made her stage debut in 1991, supplementing her income by performing as a jazz vocalist and guitarist.[11] She appeared on British television with comedians Steve Coogan and Armando Iannucci, and had small parts in Casualty, The House of Eliott, Lovejoy and Peak Practice. Driver gained broader public attention when she played the lead role in Circle of Friends in 1995. She followed this with supporting roles in GoldenEye (1995), Sleepers (1996), Big Night (1996) and Grosse Pointe Blank (1997). She played opposite Matt Damon as Skylar in the drama Good Will Hunting (1997), for which she was nominated for an Academy Award for Best Supporting Actress and a Screen Actors Guild Award.

In 1998, Driver starred in Sandra Goldbacher's film The Governess.[12] That same year, she co-starred opposite Christian Slater and Morgan Freeman in the action thriller Hard Rain. Driver has also worked on several animated features, voicing Jane in Disney's 1999 version of Tarzan and Lady Eboshi in the 1999 English-dubbed release of the Japanese film Princess Mononoke. In 2003 and 2004, she had a recurring role on Will & Grace as Lorraine Finster, the nemesis of Karen Walker (Megan Mullally) and daughter of Karen's lover, Lyle Finster (John Cleese).

In March 2007, Driver made her return to television in the FX Network show The Riches. She was nominated for an Emmy Award[13] and a Golden Globe Award as Best Lead Actress in a Drama Series in 2007 and 2008, respectively.[14] She was scheduled to appear in The Simpsons Movie, although her appearance was cut from the final version. Driver appeared in the January 2010 episode of Modern Family entitled "Moon Landing".[15] She also starred in the television series The Deep[16] and appeared in Conviction, in the comedy-drama Barney's Version, winning a Genie Award for Best Supporting Actress.[17]

Driver landed the lead role in the ABC sitcom Speechless, playing the mother of three children, one of whom has cerebral palsy and uses a wheelchair. The series debuted in the 2016-17 TV season. On 12 May 2017, ABC announced that it had renewed the series for a second season.

Driver began making music during boarding school.[20] She was part of the Milo Roth Band, which received a recording contract when she was 19.[20] In 2001 she signed with EMI and Rounder Records and performed at the SXSW music festival.[21] The title song of Everything I've Got in My Pocket, her first album, reached No. 34[22] in the UK, and the song "Invisible Girl" peaked at No. 68. Driver wrote 10 of the 11 songs on the album. In 2004, Driver was the supporting act for the Finn Brothers on the UK portion of their world tour.[23]

In 2004, Driver played Carlotta Giudicelli in Joel Schumacher's film The Phantom of the Opera, based on the musical of the same name by Andrew Lloyd Webber. Driver sang "Learn to be Lonely," an original song written for the film by Lloyd Webber. However, due to her lack of experience in opera, all her songs as Carlotta were dubbed by opera singer Margaret Preece. Driver released her second album, Seastories, in July 2007, featuring guest appearances by Ryan Adams, the Cardinals and Liz Phair.[24] Driver released a third album in October 2014 called Ask Me to Dance that includes songs by Elliott Smith, Neil Young and The Killers.[25]

In 2013, Driver appeared on an episode of the documentary series Who Do You Think You Are?, in which she searched for information about her late father and found that he had a brother, Leslie, who became an actor in repertory theatre.[30]