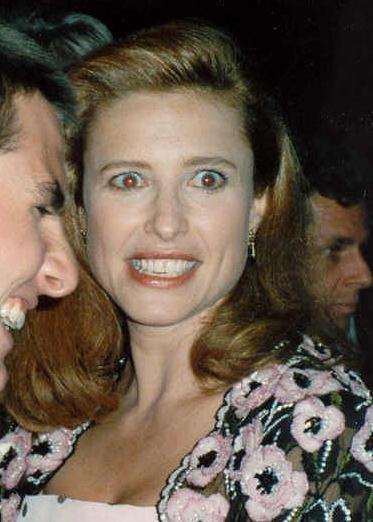 Rogers was born Miriam Spickler at General Hospital in Coral Gables, Florida. Her father is Philip C. Spickler, a civil engineer.[2][3] Her mother, Kathy Talent, was a former dance and drama major.[2] Rogers' father was Jewish and her mother Episcopalian.[4] Her father had become involved with Scientology before she was born, and the organization was part of her upbringing.[4][5]

The family lived in Virginia, Arizona, Michigan, and England, before settling in Los Angeles. Rogers attended accelerated schools and graduated from high school at age 14. In place of college, she formulated her own program of study and became involved in community theater and writing.[2] Rogers later worked in a hospital for incapacitated patients outside Palo Alto, California, and for six years she was a part-time social worker, involved in substance-abuse counseling.[2]

At the beginning of their acting careers, Rogers and Kirstie Alley lived together.[6]

After her first marriage break-up, Rogers moved to Los Angeles to embark on an acting career. She studied acting with Milton Katselas for nine months and then sought an agent.[7] She screen tested for the lead role in Body Heat that eventually went to Kathleen Turner.[8] Her earlier roles included television appearances in Hill Street Blues (1981) as a love interest for officer Andy Renko (Charles Haid), and in Magnum, P.I. (1982). In 1982, Rogers starred in the made-for-TV-movie Hear No Evil as Meg.[9][10][11] Between 1983-84, she worked extensively in television as a series regular on The Rousters and as supermodel Blair Harper-Fenton in Paper Dolls. In 1986, she starred alongside Michael Keaton in Gung Ho.

In 1986 Rogers auditioned for the female lead in Fatal Attraction that went to Glenn Close.[8] However, Rogers got her breakthrough role when she was cast opposite Tom Berenger in Someone to Watch Over Me (1987). Rogers played Claire Gregory, a socialite who is protected after she witnesses a murder. In 1989, she starred in The Mighty Quinn. In 1990, she appeared in Desperate Hours.

In 1991, Rogers starred as the protagonist in The Rapture about a woman who converts from a swinger to a born-again Christian after learning that a true Rapture is upon the world. She received an Independent Spirit Award for Best Female Lead nomination for her role in the film.[12] Slant Magazine praised her "spectacular performance, which seems in part inspired by the physical splendors and feral glances of Bette Davis or Barbara Stanwyck."[13]

In 1993 Rogers posed nude for the March 1993 edition of Playboy magazine, and also appeared on that issue's cover.[14] She later explained "Playboy had been after me for years, and finally I agreed to pose when they gave me complete approval over the shoot. It was done in a tasteful way, and since I knew that I wanted to have children soon, I thought it might be nice to have a permanent record of my body in its prime."[15]

In 1994, Rogers starred as a woman on death row in the prison thriller Reflections on a Crime and received the Best Actress prize for the film at the Seattle International Film Festival.[16]New York Magazine praised Rogers' "typically terrific performance" in the film.[17]

Rogers later joined an ensemble cast in the critically acclaimed comedy-drama Trees Lounge (1996). She also had a supporting role alongside Barbra Streisand and Lauren Bacall in The Mirror Has Two Faces (1996). Her next film was the beginning of what would become a major franchise, when she appeared as Mrs. Kensington in Austin Powers: International Man of Mystery (1997).

In 1998, she co-starred in Lost in Space. A year later, she co-produced and co-starred in the Holocaust drama The Devil's Arithmetic. Together with her fellow producers, Rogers received a Daytime Emmy Award nomination for Outstanding Children's Special for the film. Between 1998 and 1999, Rogers also had a recurring role on The X-Files playing Diana Fowley for seven episodes. In 2000, she starred in the critically acclaimed Canadian horror film Ginger Snaps. She was also a series regular on the short-lived ABC series The Geena Davis Show (2000-01).[citation needed]

Rogers later made television appearances in Dawson's Creek (2003) as the mother of Jen Lindley (Michelle Williams) and in Las Vegas (2003). She also appears in the comedy sequel Dumb and Dumberer: When Harry Met Lloyd (2003). In 2004, she starred alongside Jeff Bridges and Kim Basinger in the drama The Door in the Floor. Between 2006 and 2007, Rogers was a series regular on the Fox comedy The Loop playing Meryl. In 2010, Rogers had a guest voice role on King of the Hill and served as a producer on Unstoppable.[18]

In 2010, she performed at the Geffen Playhouse in Love, Loss, and What I Wore.[19] In 2011, she was cast in the recurring role of Robin Schmidt, a primatologist and Ashton Kutcher's mother on Two and a Half Men.[20] Rogers resumed the role in the season 10 premiere episode.[21] In 2012, she made a guest appearance on The Client List. Recent film projects include For a Good Time, Call... (2012) and, alongside Meryl Streep, in Hope Springs (2012).

In March 2012, she was cast alongside Chad Michael Murray in the ABC pilot Scruples, as Harriet, a "powerful and vindictive magazine editor".[22]

Having played poker as a teenager, Rogers took up competitive poker in 2003 and finished in the money in her first major tournament at the World Poker Tour's 240 player Shooting Stars' main event No-Limit Texas hold 'em tournament in San Jose, California, on March 4, 2004. She is on the board of directors of the World Poker Tour. In July 2006, she finished in the money (33rd place) at the $1000 Ladies' No-Limit Hold 'em World Series of Poker event.[23]

Rogers with Tom Cruise at the 1989 Academy Awards

She has been married three times. She married James Rogers in 1976, adopting his surname. They divorced in 1980.[24] On May 9, 1987 she married actor Tom Cruise in a New York City ceremony. The marriage broke down at the end of 1989 and a divorce was finalized in February 1990.[25] In January 1990 the couple released a joint statement; "While there have been very positive aspects to our marriage, there were some issues which could not be resolved even after working on them for a period of time,".[26] It was Rogers who introduced Cruise to Scientology.[27]

In an interview with Playboy in 1993, Rogers discussed her split from Cruise and likened her ex-husband to a "monk" when discussing intimacy issues.[15] Rogers later retracted the comments and claimed she had been misinterpreted.[28][15]

In 1990, Rogers began living with Chris Ciaffa. They have two children.[29] The couple married in 2003.[citation needed]

Rogers has made campaign contributions to the Democratic Party.[30][31]

Rogers' father became interested in Dianetics in 1952[32] and later became a prominent Mission Holder with the Church of Scientology and friend of founder, L. Ron Hubbard.[15] Rogers also reportedly became a highly trained auditor with the church. Prior to her acting career, she opened a "field auditing" practice, the Enhancement Center, with her first husband, Jim Rogers.[33] She was a church auditor for Sonny Bono.[34] Tom Cruise was also a client before being directed towards a Celebrity Centre.[33]

In an interview given to the Los Angeles Times in 1991, she spoke about Scientology; "that philosophy was simply part of my upbringing. And, I think it was an excellent system of belief to grow up with because Scientology offers an extremely pragmatic method for taking spiritual concerns and breaking them down into everyday applications."[4]

Rogers has left the Church of Scientology, having been described in media reports as a "former" member of the church.[35][24][15]

Cruise biographer Andrew Morton alleged that Rogers' father had been declared a Suppressive Person after leaving the church in the early 1980s during a cull of Mission Holders.[36]

A 2012 article in Vanity Fair alleged that Rogers held an unfavorable view of the church's controversial leader, David Miscavige.[37] In Going Clear: Scientology, Hollywood, and the Prison of Belief, published in 2013, author Lawrence Wright alleged that Miscavige had pushed Rogers from her marriage with Tom Cruise so the latter could pursue Nicole Kidman.[38]