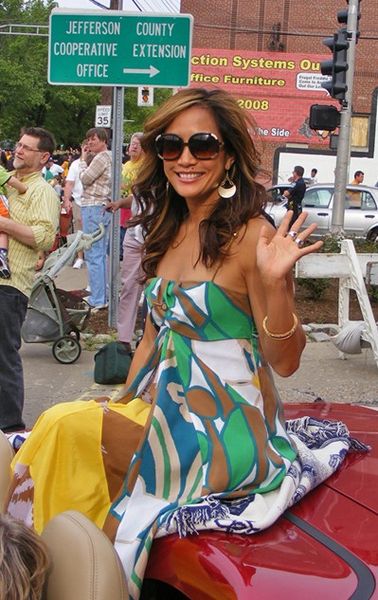 Carrie Ann Inaba (born January 5, 1968) is an American dancer, choreographer, television dance competition judge, actress, game show host, and singer. She is best known for her work on ABC TV's Dancing with the Stars, and as Fook Yu in Austin Powers in Goldmember. She started her career as a singer in Japan, but became best known for her dancing, first introducing herself to American audiences as one of the original Fly Girls on the sketch comedy series In Living Color.

Inaba was born and raised in Honolulu, Hawaii,[1] graduating from Punahou School in 1986.[2] She is of Irish, Chinese, and Japanese descent.[3][4] Her first dance instruction was at three years old in a "creative movement" class, where children danced on their own with scarves.[5] As a child, she would dance in her backyard that overlooked the Pacific Ocean.[4]

In 1986, an 18-year-old Inaba won a talent show in Hawaii.[3] She was then groomed to be a pop star in Japan, given songs to read phonetically in Japanese from a lyric sheet.[3] Even though her first single made the Top 50, she "realized it has nothing to do with how artistic you are. Your face becomes a logo they sell."[3] Inaba, lived in Tokyo from 1986 to 1988 and was a popular singer.[5] She released three singles, "Party Girl" (backed with "China Blue"), "Be Your Girl" (backed with "6½ Capezio"), and "Yume no Senaka" (backed with "Searching") and hosted weekly radio and television series.[7]

Five multicultural girls were going for their dreams and not afraid. I felt so at home.

Inaba, to People magazine, on her experience as a Fly Girl on In Living Color[3]

After returning to America, Inaba appeared as one of the "Fly Girls"—a group of backup dancers on the television series In Living Color—from 1990 to 1992. She also performed with Canadian singer Norman Iceberg and dancers Viktor Manoel (David Bowie's "Glass Spider" tour) and Luca Tommassini at Prince's notorious Glam Slam. Inaba appeared as a featured solo dancer during Madonna's 1993 Girlie Show World Tour,[5] on the condition she shave her hair.[1] After hesitating, she decided it was worth it.[3] Her favorite dance is rumba since, according to American Fitness, she feels it is "very strong and demanding."[4]

Inaba appeared in the film Austin Powers in Goldmember (2002) as Fook Yu, alongside Diane Mizota, who played her twin sister Fook Mi. The two women are not related, but when Mizota had been cast for her role, she was asked if she knew any actresses who resembled her and suggested Inaba. Inaba, who had appeared briefly in Austin Powers: The Spy Who Shagged Me, was given the role and the two women were made up to appear as identical twins. Inaba and Mizota would later reprise their roles with Mike Myers in a commercial for Motorola.[8]

Inaba has acted (usually as a dancer) in the movies Monster Mash: The Movie, Lord of Illusions, Showgirls, Boys and Girls, Flintstones II, Freak and American Virgin and the television series Jack & Jill and Nikki.

TV Guide Network announced that it had signed Inaba to anchor its live red carpet coverage, beginning with the 2009 Primetime Emmy Awards.[12]

In October 2010, Inaba was named host of the revival of the game show 1 vs. 100 on GSN. After the first season, Inaba announced she would not return to host the show.[13]

Inaba has appeared as one of three, later four judges on the Dancing with the Stars.

Inaba has been a recurring guest co-host for The Talk the last two seasons.

Inaba's choreography has appeared in several television series, including American Idol,[4] American Juniors, All American Girl, He's a Lady, In Search of the Partridge Family (in which she also appeared on air), Married by America, The Sexiest Bachelor in America Pageant, The Swan, and Who Wants to Marry a Multi-Millionaire?.[7][14] She also choreographed the Miss America Pageant for five years. She appeared in the first season of So You Think You Can Dance during the audition stages where she provided choreography for the "choreography round".

Inaba served as an honorary judge at the 2009 USA Dance National DanceSport Championships.[15]

Inaba is the founder and President of EnterMediArts, Inc., a video production company. She directs, writes, and edits films. Her work includes E! Behind The Scenes Miss America Special, 7th Festival of the Pacific Arts, A Portrait of IVI and Beyond the Dancing Image, along with the short feature film, Black Water.

She was a producer for the Broadway show Burn the Floor at New York's Longacre Theatre.[16]

Inaba considers herself a cougar.[5] In 2006, she began dating Russian dancer, Artem Chigvintsev, who is 14 years her junior.[17] They met on the set of So You Think You Can Dance.[4]

On the March 31, 2011, episode of Live with Regis and Kelly, Regis Philbin was "answering" a letter asking for advice on how to propose. The lights dimmed just before Inaba's boyfriend, Jesse Sloan, appeared on stage. With violinists playing in the background, Sloan, bent on one knee, asked for Inaba's hand, to which she responded "Yes! I will marry you!"[18] Inaba and Jesse met on online dating site eHarmony.[19] In an interview with US Weekly in 2011, Inaba stated that she and Sloan would marry in the summer of that year.[20] In September 2012, a representative for Dancing with the Stars announced that Inaba and Sloan had amicably ended their engagement.[21]

In December 2016, Inaba announced that she and actor Robb Derringer became engaged. Derringer popped the question on a romantic, secluded beach on the California coastline, which was the site of their first date.[22] In September 2017, they called off the engagement.[23][24]

Inaba has expressed a great love and respect for animals, supporting organizations such as the Humane Society of the United States and PETA, and launching the Carrie Ann Animal Foundation in 2012.[25][26][27] In 2012, Inaba started a new YouTube series about shelter cats, motivated by her love of the creatures.[28] She has had as many as seven rescue animals as pets at the same time.[29]

In a 2011 interview with Prevention, Inaba stated she was legally blind, having a vision of 20/750 which is corrected with eyeglasses and contact lenses.[5]a[›] She won't have LASIK eye surgery, however, as her vision impairment gives her, in her words, a "soft-focus morning" until she's ready to "deal with the world."[5] She also revealed that she suffers from spinal stenosis,[30][31] which she thinks began with a neck injury during gymnastics when she was eight years old.[5]

She also has Sjogren's Syndrome, a chronic autoimmune inflammatory disease that destroys moisture producing glands. As the Sjogren Syndrome Foundation's National Awareness Ambassador & Spokesperson, she has expressed her commitment to increasing awareness of SS and promoting funding for research, treatment, and a cure.[32]

Inaba has worked with the Entertainment Industry Foundation's iParticipate campaign, an American volunteer advocacy group, and Drea's Dream, a dance therapy initiative for children who have cancer.[33] She's also a founding member of Nigel Lythgoe's dance education organization, the Dizzy Feet Foundation.[34] After her mother's battle with cancer in 2008, both women began to participate in the EIF Revlon Run/Walk for Women.[5]