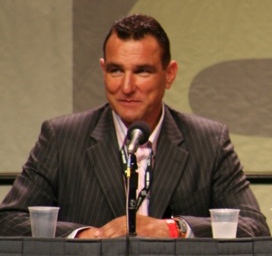 Vincent Peter Jones (born 5 January 1965) is a British actor and former professional footballer who played as a midfielder from 1984 to 1999, notably for Wimbledon, Leeds United, Sheffield United, Chelsea and Wales.

Born in Watford, Hertfordshire, England, Jones represented and captained the Welsh national football team, having qualified via a Welsh grandparent. As a member of the "Crazy Gang", he won the 1988 FA Cup Final with Wimbledon, a club for which he played well over 200 games during two spells between 1986 and 1998. He also played for Chelsea, Leeds United, Sheffield United and Queens Park Rangers. Jones was a defensive midfielder who was especially noted for his very aggressive style of play, earning him a "hard man" image on the field.

Since his retirement from football, he has capitalised on his tough man image and is now known as an actor for his fiery demeanour and physical presence, often being typecast into roles as violent criminals and thugs. His early film career began with roles in mainstream films such as Snatch (2000), Gone in 60 Seconds (2000), and Mean Machine (2001). He played Juggernaut in the 2006 film X-Men: The Last Stand, Sebastian Moran in CBS's Elementary, and Brick in The CW's Arrow.

Jones appeared in Celebrity Big Brother 2010, where he finished in third place behind Dane Bowers and Alex Reid.

Vinnie Jones was born on 5 January 1965 in Watford, Hertfordshire, to Peter (a gamekeeper) and Glenda (née Harris) Jones. He attended Bedmond Junior School near Watford. After leaving school and rising to fame, Jones would regularly visit Dollis Junior School due to his close relationship with the now deceased Headteacher Sir Derek Heasman, formally of Bedmond Junior School (who received an OBE for services to education). His family relocated to Hertfordshire where he then later attended Langleybury School. He captained the Hertfordshire Schools football team as a teenager.
Read more...

Jones' career in football began in 1984, when he was 19 years old, at Alliance Premier League side Wealdstone.[1] He combined football with working as a hod carrier on building sites.[2] He played one season with Swedish club IFK Holmsund in 1986, helping to lead the team to a Division 3 victory.[3][4]

In 1986, he moved to full-time professional status with Wimbledon, who paid Wealdstone £10,000 for him. He scored on only his second appearance for Wimbledon on 29 November 1986, in a 1-0 win over Manchester United in the First Division. He was a member of the Wimbledon team which won the FA Cup in 1988, beating league champions Liverpool 1-0 in the final.

Jones was transferred to Leeds United in 1989 and was part of the team which finished as champions of the old Second Division, winning promotion to Division One. After helping them win promotion to the top-flight, Jones proved he could thrive, and under the stewardship of Howard Wilkinson and the captaincy of Gordon Strachan, receiving only three yellow cards during the entire season.[5]

Jones left Leeds United early in the 1990-91 season after losing his first-team place to youngsters David Batty and Gary Speed, as well as new signing Gary McAllister. He returned to Leeds for Lucas Radebe's testimonial in 2006. His former Wimbledon manager Dave Bassett signed him for Sheffield United on his exit from Elland Road, before selling him to Chelsea a year later. After just one year at Stamford Bridge, he was back with Wimbledon in the 1992-93 season, when the FA Premier League had just been formed. He helped Wimbledon equal their best ever league finish in 1993-94, when they finished sixth in the Premier League. Three seasons later, he contributed to another strong season for the club, who reached the semi-finals of both cups and finished eighth in the league. That season he scored the winning goal as Wimbledon won 1-0 against Arsenal at Highbury.[6]

His second exit from Wimbledon came when he became player/coach of QPR in early 1998, scoring on his debut against Huddersfield Town.[7]

In December 1994, Jones was named in the Wales squad qualifying via his Ruthin-born maternal grandfather.[8] He made his debut under Mike Smith for Wales on 14 December 1994, three weeks before his 30th birthday, in a 3-0 home defeat to Bulgaria in the Euro 96 qualifiers. The last of his nine caps came on 29 March 1997 in a 2-1 defeat to Belgium in a World Cup qualifier, also at Cardiff Arms Park.[9]

Jones's international call-up was however greeted with consternation and even ridiculed by Jimmy Greaves, who said, "Well, stone me! We've had cocaine, bribery and Arsenal scoring two goals at home. But just when you thought there were truly no surprises left in football, Vinnie Jones turns out to be an international player!".[10]

Jones was known for his "hard man" image.[11] He was sent off 12 times in his career, as well as holding the record for the quickest ever booking in a football match, being booked after just three seconds for a foul on the opposition player Dane Whitehouse in a FA Cup tie between Chelsea and Sheffield United in 1992.[12] In his autobiography, he recalls: "I must have been too high, too wild, too strong or too early, because, after three seconds, I could hardly have been too bloody late!"[citation needed]

In an incident in October 1987, Jones was photographed grabbing Paul Gascoigne by his testicles during a league game for Wimbledon against Newcastle United.[13][14]

He also was the presenter of the infamous Soccer's Hard Men video released in 1992, which featured archived footage of him and many other "hard men" of the game, and included advice for budding "hard men". After the release of the video, Jones was fined £20,000 and given a six-month ban (suspended for three years) for "bringing the game into disrepute". Wimbledon chairman Sam Hammam branded Jones a "mosquito brain". After this incident, Jones failed to stay out of trouble. After exceeding 40 disciplinary points that season, he was once again summoned to Lancaster Gate, the headquarters of The Football Association, but failed to appear. The FA banned Jones indefinitely. Jones explained that he had "mixed up" the date of the hearing, for which he received a four-match ban and was told by Football Association officials to "grow up".[15] Jones commented later: "The FA have given me a pat on the back. I've taken violence off the terracing and onto the pitch" - an obvious reference to the football hooliganism problem which had blighted the English game during the 1970s and 1980s.[16]

Jones has stated that he would eventually like to return to football, possibly to Leeds. Jones told Yorkshire Radio "I will come back without a doubt, Leeds fans gave me so much and it's a club very close to my heart."[17]

Jones made an appearance in Ireland for Carlisle United, coming on as a second-half substitute in 2001 against Shelbourne, teaming up with friend Roddy Collins who was manager at the time. In June 2010, Jones released a press statement stating that he was donating his 1988 FA Cup winners medal to the fans of A.F.C. Wimbledon, wishing their fans the best for the future. The medal will be displayed in the club's Kingsmeadow stadium.[18]

Jones with Keith David at The Cape Panel

In 1998 Vinnie Jones made his film debut in Guy Ritchie's crime comedy Lock, Stock and Two Smoking Barrels, in which he played a mob enforcer, Big Chris.[19] Jones was typecast in similar roles as criminals or villains, including the dapper gun-for-hire "Bullet-Tooth Tony" in Ritchie's 2000 follow up Snatch. Jones became known to American audiences in the 2000 film remake of Gone in 60 Seconds, in which he played "Sphinx". Although this was a major role with significant screen time, he only had one line of dialog because his character was a silent, tough brawler. He teamed up with director Dominic Sena again the following year for the thriller Swordfish, where Jones played one of John Travolta's ruthless henchmen.

Jones played Danny Meehan in Mean Machine, a 2001 British remake of the Burt Reynolds film The Longest Yard (retitled Mean Machine for its UK release). He played a former captain of the England national football team, who is sent to prison and subsequently takes control of a team of inmates who play the guards.

He played another football role as Mad Maynard, the leader of a Manchester United football hooligan firm, in the 2004 film EuroTrip. His next role was in the 2006 film, X-Men: The Last Stand, as the X-Men villain Cain Marko/Juggernaut. Jones said that he would like to play Juggernaut in a spin-off. His line in the film, "I'm the Juggernaut, bitch!," was based on a pre-existing Internet parody. [20] The same year, he was featured in another football film, She's the Man as the coach of the Illyria team. In 2007, he played the part of McStarley in The Condemned, about death row inmates forced to fight to the death on a remote island.

Jones played a professional killer in the Kazakhstani film, Ликвидатор ("Liquidator"), in 2011. Jones' character is an elite assassin invited to eliminate the main character. Producers of the film dealt with the Kazakh/English language barrier by writing Jones' character as a mute who does not speak throughout the film. In the same year he played in the movie "Blood out" as Zed. He played a role in the Hungarian film The Magic Boys in late 2012. In the 2004 Japanese film Survive Style 5+, he played a hit-man from Britain. In 2012, Jones voiced "Freddie the Dog" in Madagascar 3: Europe's Most Wanted. He co-starred alongside Sylvester Stallone and Arnold Schwarzenegger in the action/thriller Escape Plan, released in 2013, and was featured with Danny Trejo in the 2014 horror/thriller Reaper.

Jones was a housemate on the reality television show Celebrity Big Brother 7,[21] and celebrated his 45th birthday while he participated. He received loud cheers as he entered the house and was the favourite to win going into the house, but he did not maintain popularity with the public, the crowd chanted 'Get Vinnie Out' on the final night and booed him as he left the house after he finished in third place. Speaking of his experience on the show, he said: "It was like One Flew Over the Cuckoo's Nest in there - and I was Jack Nicholson."[22]

In 1998, Jones penned an autobiography, Vinnie: The Autobiography,[23] which was later revised and reprinted a year later to include information on his first film appearance in Lock, Stock and Two Smoking Barrels.

During his football career Jones resided in Dronfield, near Sheffield. Jones married Tanya Terry (born 1966) in 1994 in Watford. She has a daughter by her first husband, footballer Steve Terry. Jones's son joined the British Army, completing his training in August 2008, and serves in the Life Guards.[24]

Jones is an outspoken supporter of the Conservative Party, stating "I am very proud of being British, very pro the monarchy and very Conservative."[25]

He is a supporter of the football team Tottenham Hotspur.[26]

Jones was convicted in June 1998 of assault occasioning actual bodily harm and criminal damage against a neighbour in November 1997.[27]

Jones was convicted in December 2003 of assault and threatening behaviour on an aircraft for an air rage incident, during which he slapped a passenger in the face and threatened to murder the cabin crew while drunk on an aircraft. He was fined £1,100 and ordered to perform 80 hours of community service.[28] As a result of the conviction Hertfordshire police revoked Jones' firearms licence and seized the weapons listed on the licence.[29]

In November 2013, it was revealed that both Jones and his wife were being treated for skin cancer; his wife had suffered for several years, whereas Jones only discovered that he had cancer after a malignant melanoma below his eye was found.[30]