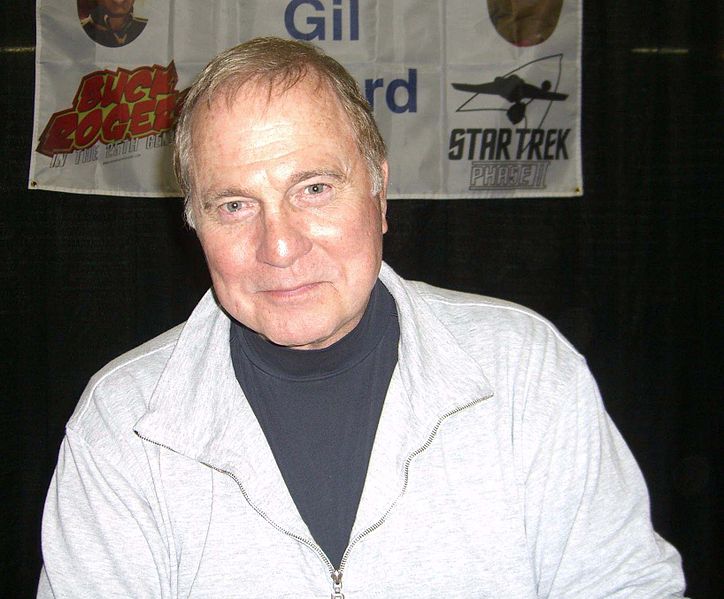 Gilbert C. Gerard (born January 23, 1943) is an American actor, most notable for his role as Captain William "Buck" Rogers in the 1979-81 television series Buck Rogers in the 25th Century.

Gerard was born in Little Rock, Arkansas, to a college instructor mother and a salesman father.[2] While attending Little Rock Catholic High School for Boys, he was involved in acting. He worked at a Kroger grocery store in his teens. In 1960, he attended Maryknoll Seminary, in Glen Ellyn, Illinois and played the title role in an all-male production of The Music Man. He attended the University of Central Arkansas but dropped out before graduation.[citation needed]
Read more...

Gerard was employed as an industrial chemist, and within a few years of starting he became regional manager of a large chemical company headed by governor Winthrop Rockefeller. Gerard's employers said they would appoint him as the firm's vice president if he undertook a master's degree course, so he quit rather than explain that he did not have a college degree.[citation needed]

He then went to New York City where he studied drama by day and drove a taxicab at night. Gerard picked up a fare who showed a lively interest in the problems of unknown, unemployed actors. Before he left the cab, he told Gerard to report in a few days to the set of Love Story, which was being filmed on location in New York. When Gerard arrived on the Love Story set, he was hired as an extra. Later that day, he was singled out for a "bit" role, but his role was not included in the finished film.

During the next few years, he did most of his acting in television commercials, almost 400, including a stint as spokesman for the Ford Motor Company. After small roles in the gay-themed film Some of My Best Friends Are... (1971), and the thriller Man on a Swing (1974), Gerard then gained a prominent role in the daytime soap opera The Doctors for two years. Gerard also formed his own production company in partnership with a writer-producer, co-authored a screenplay called Hooch (1977) and filmed it as a starring vehicle for himself. With Hooch completed, he traveled to California to co-star with Yvette Mimieux in Ransom for Alice! (1977) and to play Lee Grant's youthful lover in Universal's Airport '77 (1977). He appeared in a 1977 episode of Hawaii Five-O (The Ninth Step) as Marty Cobb, a former cop and recovering alcoholic. A guest appearance in Little House on the Prairie impressed producer-star Michael Landon, who cast him in the leading role in the 1978 TV movie Killing Stone.

Gerard then landed his best-known role, as Captain William "Buck" Rogers in the TV series Buck Rogers in the 25th Century which ran from 1979-81, with the feature-length pilot episode being released theatrically some months prior to the first broadcast of the series. After this, he was featured in a number of other TV shows and movies, including starring roles in the 1982 TV movie Hear No Evil as Dragon,[3][4][5] the short-lived series Sidekicks (1986) and E.A.R.T.H. Force (1990).

In 1992, Gerard presented the reality TV series Code 3, which followed firefighters from different areas of the US as they respond to emergency calls. The show ran on the Fox TV Network until the following year. For the remainder of the 1990s, Gerard made guest appearances on various TV shows, including Fish Police, Brotherly Love, The Big Easy, Days of Our Lives and Pacific Blue.

In January 2007, Gerard was the subject of the one-hour documentary Action Hero Makeover on the Discovery Health Channel, which documented his year-long progress after undergoing life-saving mini-gastric bypass surgery in October 2005. According to the program, he had been struggling with his weight for 40 years, losing weight only to gain it back. By the time of the program's production, his weight had risen to over 350 pounds (160 kg), and he had many life-threatening health problems including a severe problem with type 2 diabetes. Within five days of the surgery he had lost 20 lb (9.1 kg), within three months he had lost 80 lb (36 kg), and within ten months he lost a total of 145 lb (66 kg).[6]

Gerard and his Buck Rogers co-star Erin Gray reunited in 2007 for the TV film Nuclear Hurricane, and also returned to the Buck Rogers universe by playing the characters' parents in the pilot episode of James Cawley's Buck Rogers Begins Internet video series in 2009.[7]

In 2015, Gerard voiced Megatronus in Transformers: Robots in Disguise.

Report a problem
Write to Gil Gerard at FanPal • 2023