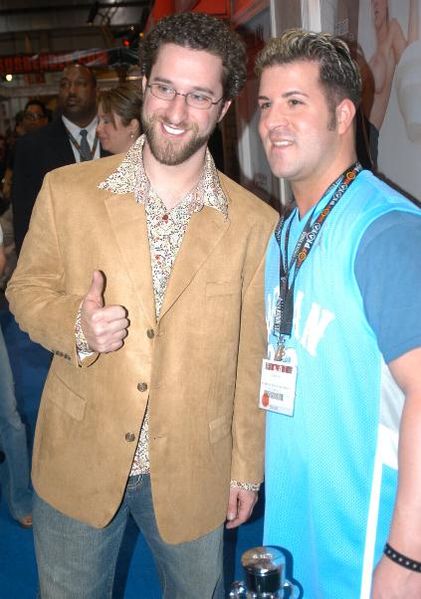 Diamond was born to a Jewish family[2] on January 7, 1977, in San Jose, California.[3] His father taught digital electronics for a computer-processing firm and his mother was a computer operator for Pacific Bell.[4]

Diamond began acting as a child. He became known for playing the nerdy and lovable Samuel "Screech" Powers on the television show Saved by the Bell, a role he played for close to thirteen years from its beginning as Good Morning, Miss Bliss (1988-89) through its final incarnation, Saved by the Bell: The New Class (1994-2000). Continuing the series into college, Saved by the Bell: The College Years shows most of the cast transplanted into not only the same college, but also the same college dormitory, where Screech continued his typical misadventures. The College Years was canceled after one season. Diamond returned to Bayside High as Principal Belding's assistant in The New Class episodes, remaining with the show until its cancellation.

In 2006, Diamond directed and released his own sex tape, Screeched - Saved by the Smell.[6][7][8] However, Diamond stated in an interview on "Where Are They Now?" of the Oprah Winfrey Network that he was not actually in the sex tape; rather, a "stunt double" had his likeness added onto it.[9]

Appearances after Saved by the Bell

Diamond began doing stand up comedy after the end of Saved by the Bell, and has toured on and off ever since. He has also been featured on a number of game and reality shows including The Weakest Link, and Celebrity Boxing 2. Diamond has also made several cameo appearances in films, including appearances in Dickie Roberts: Former Child Star in 2003 and in Made in 2001. In 2009, he also played the part of "Alumnus Guy #1" in American Pie Presents: The Book of Love. In 2010, he had a supporting role in the sports comedy Tetherball: The Movie. In it, Diamond plays the Foul Mouths' down-on-his-luck coach. In 2014 Diamond played Bernardo, the castle guard, in the partially animated science fiction comedy Hamlet A.D.D..[10]

In 2007 Diamond was a cast member of the fifth season of Celebrity Fit Club. During his run on the show, he came into conflict with former American Idol finalist Kimberley Locke, country singer Cledus T. Judd, rapper Da Brat, the program's host, Ant, and the program's trainer, former USMC sergeant Harvey Walden IV. Tensions between Diamond and the rest of the celebrities culminated in an open confrontation during which Diamond initially challenged Ant to "physical combat" and subsequently issued the challenge to Harvey Walden after Walden defended Ant.[11]

In 2009, Diamond published an inside story of the show's cast and crew, from his point of view, titled Behind the Bell.[12] The book paints an unflattering portrait of many of Diamond's colleagues and their alleged, sordid backstage behavior; some of these claims have been refuted by Diamond's colleagues and questioned by critics.[13] Diamond also alleges, in the book, that he has had sex with 2,000 women, one of them NBC's VP of children's programming, Linda Mancuso, who was 18 years his senior.[14][15] Diamond's former co-stars were highly critical of the book and Mark-Paul Gosselaar stated that his own experiences with the show were positive and did not see where any of the book's negative claims actually occurred on set.

Diamond later commented on the book's content in a December 2013 appearance on a "Where Are They Now" segment on the OWN Network in which he stated that the book was ghost written by an author who simply interviewed him and compiled the book from his answers. He claimed that many parts of the book, such as allegations of teen sex and drug use, were fabricated from very minor statements he made during the interviews, such as his remark, "Yeah, there were a bunch of kids on set with hormones so...what do you think?"[16]

He is also a musician and formed an alternative metal band called Salty The Pocketknife. Diamond played bass and wrote much of the music as well. Shortly after recording their first album, the band split up due to internal disagreements.[17] Diamond has also appeared on truTV's The Smoking Gun Presents: World's Dumbest... as a commentator.

He appeared as a host at the 12th annual Gathering of the Juggalos.[18]

In August 2013, Diamond became a housemate on the twelfth series of Celebrity Big Brother. He became the fourth housemate to be evicted on Day 16.

Diamond currently resides in Port Washington, Wisconsin.[19] He married longtime girlfriend Jennifer Misner in 2009, though the two have since separated.[20][21]

On December 26, 2014, Diamond was arrested in Ozaukee County, Wisconsin, for possession of a switchblade knife, which he was alleged to have pulled during a bar altercation in which a man was stabbed.[22][23][24][25] Amanda Schutz, his fiancée, also faced a charge of disorderly conduct in relation to the incident,[26] was found guilty and fined $500.[27] On May 29, 2015, Diamond was convicted of two misdemeanors, carrying a concealed weapon and disorderly conduct. He was cleared of the most serious charge, recklessly endangering public safety.[28] On June 25, 2015, Diamond was sentenced to four months in prison.[29] He served three months and was released on probation. Diamond's probation agent determined that he had violated the terms of his probation, and he was arrested in May 2016.[30]