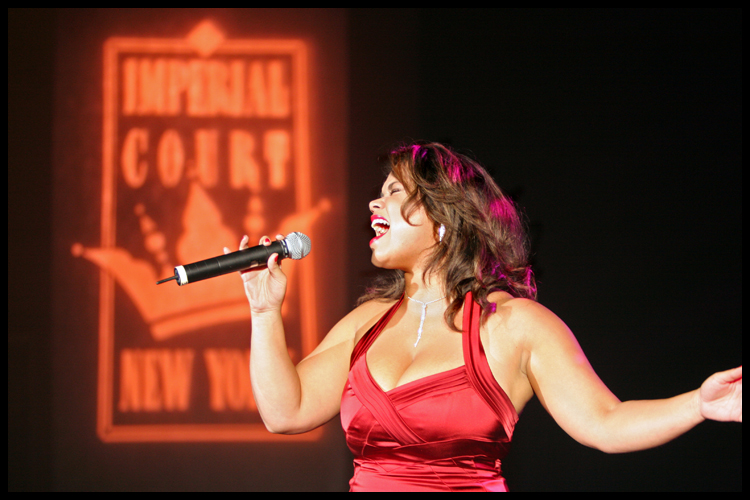 Kimberley Dawn Locke (born January 3, 1978) is an American singer-songwriter and model. She has recorded in the dance and pop genres, and has targeted the adult contemporary radio format.

Locke was born in Hartsville, Tennessee, to Donald and Christine Locke, and is the second of two children, with an older brother named Ashley. She and her brother spent most of their life in Gallatin. At age five, Locke began singing in church. Her parents divorced when she was eight years old.

Locke grew up admiring such singers as Janet Jackson, Whitney Houston, Patti LaBelle, and Diana Ross. She and childhood friends Chandra Boone, Selina Robb, and Nacole Rice formed a quartet as teens named Shadz of U, which performed at many local churches. The group later appeared on Locke's 2007 Based on a True Story album, singing backup on Everyday Angels.

Locke went to Gallatin High School, where she was one of sixteen members to participate in its performing group. She remained in the group throughout her high school years. She was also selected twice as a member of the All-Middle State Chorus. After graduating, she began to work for a company in Nashville as an administrative assistant.

Like 2007 American Idol finalist Melinda Doolittle, Locke is an alumna of Belmont University in Nashville.

On October 30, 2002, the reality TV singing competition American Idol held auditions in Nashville, Tennessee for the show's second season. Locke successfully passed through to the next round, and in December was chosen to perform on the show. She finished third, behind winner Ruben Studdard and runnerup Clay Aiken. She has since been invited back to the show to perform twice (seasons 3 and 7).

Locke went on to sign a record deal with Curb Records on September 6, 2003. Her debut album, One Love, was released May 4, 2004. Debut single "8th World Wonder" reached the top half of the Billboard Hot 100 and was successful on other charts, and entered the UK charts. "Wrong" and "I Could" followed as singles.

Locke released her version of "Up on the House Top" in the autumn of 2005 and by the end of year, it had reached the top spot of the Adult Contemporary (A/C) charts. The following year, Locke's version of "Jingle Bells" was released and topped the same charts. A full Christmas album entitled Christmas — only available digitally — was released on November 6, 2007.

After parting ways with Curb Records in 2009, Locke went on to be the first artist to sign a deal with Randy Jackson's Dream Merchant 21 record label[3][4] and recorded the single "Strobelight", which was released April 6, 2010.[5] as part of the "singles only" agreement about which Locke stated, "We live in a world where people go to iTunes and download the songs they want.[6] "

In 2011, Locke issued a press release announcing her new entertainment company called I AM Entertainment. Her first independent release through her new company was her danced-themed EP album, "Four for the Floor", which was released on July 19, 2011.[7] On November 1, 2011 Locke released a cover of Silver Bells which was accompanied by an I AM Entertainment produced music video.[8] During the summer of 2011, fans chose via a Facebook voting campaign,[9] which would be Locke's next single. The winning song was "Finally Free" which is slated to be released with a full remix package in 2012.[10]

In 2013, Locke teamed up with British production team Cahill to release the single, "Feel the Love," on 3 Beat Records, that was promoted exclusively to the United Kingdom. The song reaching number one on both the Club[11] and Pop[12] charts in the United Kingdom, and reached number 29 on Billboard's Global Dance chart.[13]

In 2015, Locke is working on her next album which will feature songs she co-wrote with Bill Grainer.[14]

While pursuing her music career, Locke was also interested in becoming a television star.[citation needed] Since 2005, Locke has featured on many television shows.

In August 2004, Locke was invited to be a guest host on Good Day Live, and was invited back to co-host twice more. In 2005, she was a contestant on the game show, Family Feud, and she hosted Word Slam!, a GSN live game show; an accompanying documentary with Locke aired on that cable channel that September. Throughout the summer of 2005, a proposed reality TV series, Aren't You That Girl?, taped Locke's progress on her second album and preparations for her upcoming wedding. The engagement was later called off and the project was cancelled.[15] During MTV's early fall 2006 lineup, Locke was a judge and co-host on the short lived reality-show competition "Little Talent Show".

In 2007 Locke was a participant on the fifth season of Celebrity Fit Club. She has been the focused target of derision from fellow cast member Dustin Diamond, who has repeatedly insulted Locke. The ensuing argument caused all other contestants to leave the stage.[16] On June 17, 2007, the season finale of Celebrity Fit Club aired, drawing in 2.7 million viewers, the show's highest yet.

Locke sat in as a guest co-host of The View in March 2007. In April 2008, she also appeared on "Don't Forget the Lyrics!" with her winnings to benefit Camp Heartland. She was the first contestant in the history of the show to attempt the million dollar song. Although unsuccessful, she was awarded $100,000 for ranking so well. Locke vowed she would raise the $400,000 she lost when she unsuccessfully attempted to win the million dollars.

She has also hosted ABC's Windy City Live, Hallmark’s The Better Show, and GSN’s Word Slam.[17] In 2013, she appeared as an expert judge on NBCUniversal’s Next Great Family Band.[18]

From 2005 through September 2006, Locke was signed with Ford Models' 14+ Division. She has appeared on the covers of the July 2005 issue of Figure magazine and the summer 2007 issue of UneQ magazine. She has also been a former spokesperson for Lane Bryant and Seven7 Jeans.

While filming for Celebrity Fit Club, Locke chose to follow the Jenny Craig diet plan and had great success. In December 2006, Locke was offered a deal as spokeswoman with Jenny Craig.[19] At the completion of filming for the show, Kimberley weighed in at a final weight of 149 lbs; down a total of 27 lbs. from her original start weight of 176 lbs. A feature in the September 10th issue of People Magazine shows Kimberley at 141 lbs., only 3 pounds away from her goal. Locke announced through her official MySpace blog on October 8, 2007 that she had finally achieved her 40-pound weight loss goal.

In January 2008, Locke was featured as the centerfold of Us Weekly's "Diets That Work" issue. The feature counted down the top five celebrity diets of 2007, with Locke being named the winner.[20] Ellen DeGeneres was so personally blown away by the feature that she asked Locke to be a special guest on an upcoming episode of her popular daytime talk show. The episode taped on January 10, 2008 and aired the following day.

In 2011, Locke announced she had founded her own entertainment company called I AM Entertainment.[1]

Locke has been active in many charities, particularly in raising awareness of HIV/AIDS and breast cancer. Locke's first exposure to working with children living with HIV/AIDS was through her work with the Elizabeth Glaser Pediatric AIDS Foundation, which sent her on an 11-day trip through Africa. She then went on to work with other organizations such as YouthAIDS, the Davy Foundation, and Camp Heartland. In recognition of her extensive charitable efforts as an HIV/AIDS activist, Locke was presented with the Red Ribbon award on November 9, 2007.[21] "The Red Ribbon Award is done for someone in the community that advocates AIDS awareness, and especially HIV awareness," said press liaison Chris Prouty. "They want to pinpoint one specific person and get the community involved in the accolades and a congratulatory celebration." At a news conference prior to her performance that night, Locke gave an acceptance speech. "All the kids have a great story, and that's what I've chosen to be a part of. It's the old cliché: kids are our future."[22] She appeared on a Celebrity episode of Don't Forget The Lyrics to raise money for Camp Heartland, walking away with $100,000 for her charity. In March 2010, Locke was voted onto Camp Heartland's board of directors.[21]

In October 2007, Locke teamed up with General Mills to introduce the 'Pink For A Cure' campaign to promote awareness of breast cancer in the African-American community. "My aunt is a breast cancer survivor. So, as someone whose family has been directly touched by this disease, I'm very passionate about getting people talking more about their health," said Locke.[23]

Locke is also a member of the Entertainment Council of Feeding America, the nation's leading hunger-relief organization.[24]

Report a problem
Write to Kimberley Locke at FanPal • 2023