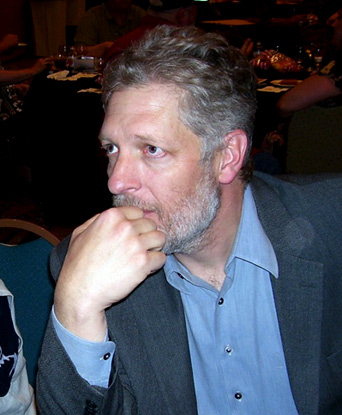 Clarence J. Brown III (born January 5, 1959)[1] is an American actor and voice actor known for his roles as the Kurgan in the fantasy film Highlander (1986), Captain Byron Hadley in the prison drama film The Shawshank Redemption (1994), Charles Zim in the sci-fi film Starship Troopers (1997) and Brother Justin Crowe in the television series Carnivàle (2003-2005). He has also provided his voice to films, television series and video games, including Mr. Krabs in SpongeBob SquarePants (1999-present), Lex Luthor in various media, Doctor Neo Cortex in the Crash Bandicoot video games (1997-2003), Surtur in Thor: Ragnarok (2017) and Lt. Hank Anderson in Detroit: Become Human (2018).

Brown was born on January 5, 1959 in Urbana, Ohio,[1] and had an older sister, Beth (c.1957-1964).[2] Their mother, Joyce Helen (Eldridge), was a conductor, composer, and concert pianist.[1][3] Their father, Clarence J. "Bud" Brown, Jr., helped manage the Brown Publishing Company, the family-owned newspaper business started by Clancy's grandfather, Congressman Clarence J. Brown. From 1965 to 1983, Bud Brown also served as a congressman, and later as Chairman of the Board of Brown Publishing.[4] The family operated the business until 2010.
Read more...

Due to his height, deep voice and large frame, Brown is often cast in the roles of villains or authority figures. His career tends to alternate among mainstream television and cable; major studio and independent movies; and a large repertoire of voice work for animated and video game roles.

Brown is known for his role as the Kurgan in the 1986 film Highlander, his role as Captain Byron Hadley in The Shawshank Redemption, Viking Lofgren in the drama movie Bad Boys (1983), Rawhide in The Adventures of Buckaroo Banzai Across the Eighth Dimension (1984), Frankenstein's monster in The Bride (1985), Army mercenary Larry McRose in Extreme Prejudice, played a role of a band manager in a movie called Thunder Alley (1985) (1987), vicious killer Steve in Shoot to Kill (1988), the police officer in Michael Jackson's short movie Speed Demon (1988), Dead Man Walking (cameo only), Sheriff Gus Gilbert in Pet Sematary Two, Career Sergeant Zim in Starship Troopers (a role he would reprise in the animated series Roughnecks: Starship Troopers Chronicles), and Captain William Hadley in The Guardian. He also played a role in Flubber as one of the evil henchmen that get harmed by uncontrollably bouncing sports equipment. In 1989, he appeared in the action thriller Blue Steel.

Brown has played prison officers in three movies dealing with miscarriages of justice: the tyrannical Captain Byron Hadley in The Shawshank Redemption, the sympathetic Lt. Williams in The Hurricane, and Lt. McMannis in Last Light. In 2001, he played a magical character credited as 'The granter of wishes' in the Hallmark version of Snow White. In 2007, he played the Viking leader opposite Karl Urban in Pathfinder.

He starred in several independent films in 2008: The Burrowers, screened at the Toronto International Film Festival in 2008, and released in the United States on DVD in April 2009, and The Twenty. He appeared in Steven Soderbergh's 2009 film The Informant! opposite Matt Damon in which he played an attorney. He also portrayed Alan Smith in Samuel Bayer's 2010 remake of the horror film A Nightmare on Elm Street.[5] In 2011, he starred in Cowboys & Aliens (directed by Jon Favreau) alongside Daniel Craig, Harrison Ford and Olivia Wilde. He is cast as the voice of The Goon in the upcoming animated feature film. He also stars as Albert Marconi in the film adaptation of the David Wong novel, John Dies at the End, directed by Don Coscarelli.[6]

Brown was a series regular on the science fiction series Earth 2 from 1994 to 1995, playing the role of John Danziger. Brown was notable as the sinister preacher Brother Justin Crowe in the HBO series Carnivàle. Though the series only ran for two seasons, Carnivàle has attained a cult popularity and his performance was applauded by critics for showcasing a new side to his acting talents. He also starred in the Showtime production In the Company of Spies and the HBO film Cast a Deadly Spell.[7]

He has also made many guest appearances on various television series including ER, the Star Trek: Enterprise episode "Desert Crossing" as Zobral, Lost as Kelvin Joe Inman, and former baseball player (and investment scam mark) Rudy Blue on The Riches. Brown also appeared as the frontiersman Simon Kenton, the key to America's westward expansion, in the 2000 Kentucky Educational Television production "A Walk with Simon Kenton". Kenton resembled Brown in stature and is buried in Brown's hometown. Brown most recently appeared as Hart Sterling, founding partner of fictional law firm Sterling, Huddle, Oppenheim & Craft in ABC's The Deep End. He also guest starred on the Leverage series episode "The Gone Fishin Job" and on The Dukes of Hazzard sixth-season episode "Too Many Roscos". Currently, he appears on The CW's TV production of The Flash in the recurring guest-star role of General Wade Eiling. He has also portrayed Ray Schoonover in the Daredevil episodes "Guilty as Sin" and "The Dark at the End of the Tunnel".

As a voice-over actor, Brown has appeared in several video games, usually playing an antagonistic character. He voiced the corrupt Baron Praxis in the PlayStation 2 video game Jak II; Doctor Neo Cortex and Uka Uka in a number of the Crash Bandicoot video games; Montross (a Mandalorian rival of Jango Fett) in Star Wars: Bounty Hunter; Hades in God of War III; Thrall in the cancelled video game Warcraft Adventures: Lord of the Clans; Scourgelord Tyrannus in World of Warcraft: Wrath of the Lich King; and the conniving Alderman Richard Hughes in the Xbox 360 game Saints Row; Lt. Anderson in Detroit: Become Human, released in May 2018; and as Maestro, a playable character in the 2015 First-person Shooter, Rainbow Six Siege, released as a standalone DLC in June, 2018; including Run Like Hell, PS2 and XBOX .Dag’Rek (Voice)

For animated television series, he voiced several characters (Hakon, Tomas Brod and Wolf) in the series Gargoyles; Tanuki Gonta in the English language dub of Pom Poko (1994); Raiden on the animated series Mortal Kombat: Defenders of the Realm; a Hessian trooper in The Night of the Headless Horseman (1999); billionaire Maxmilian Speil in Godzilla: The Series; and five of the six members of Legion Ex Machina in Big Guy and Rusty the Boy Robot.

Since 1999, he has played the role of Mr. Krabs of SpongeBob SquarePants (as well as The SpongeBob SquarePants Movie and its sequel The SpongeBob Movie: Sponge Out of Water). From 2000 to 2005, he played several roles (Captain Black, Ratso and the animated moose doll Super Moose) on Jackie Chan Adventures. He also voiced Vice-Principal Pangborn in All Grown Up!, Barkmeat in Catscratch, Otto in Super Robot Monkey Team Hyperforce Go!, which also stars fellow SpongeBob co-star Tom Kenny, who voices Gibson, and Gorrath in Megas XLR.

For Disney, he has played roles such as the Dark Dragon in American Dragon: Jake Long, the Ugly Bald Guy in the movie Recess: School's Out, as well as Undertow in The Little Mermaid II: Return to the Sea, and he also made a guest appearance in the Kim Possible episode "Oh, No! Yono" where he played the titular character. In the Avatar franchise, Brown voiced corrupt Dai Li leader Long Feng in Avatar: The Last Airbender in 2006 and top gangster Yakone in The Legend of Korra in 2012.

He guest starred in The Penguins of Madagascar episodes "The Red Squirrel" and "Our Man in Grrfurjiclestan" as the rockhopper penguin Buck Rockgut. He also guest starred in Duck Dodgers as the voice of Archduke Zag. He makes a few guest appearances in the Disney Channel series Phineas and Ferb, most notably as Santa Claus, the Regurgitator, and the Warden at Smile Away Reformatory School. In 2010, he played various characters on Adventure Time including the Demon Cat in "Dungeon" and the narrator for the opening and closing quotes in the episode "Ocean of Fear".

From the third quarter of 2014, Brown began doing voice-overs as the main talent for Chevy truck national and regional television commercials.

On March 21, 2016, Brown voiced the Red Death, a parody of the Marvel villain Red Skull, in The Venture Brothers episode "Red Means Stop".

Brown's best-known role is perhaps as the villainous Lex Luthor, a role that he played for over twelve years. He first voiced Luthor in the DCAU, starting with Superman: The Animated Series (where he had originally auditioned for the role of Superman) and reprised his role in the subsequent animated series Justice League and Justice League Unlimited. He also voiced the character in the video game Superman: Shadow of Apokolips as well as The Batman cartoon series. Brown later again played Luthor in the 2009 animated film Superman/Batman: Public Enemies.[citation needed] He also voiced a character under the name Rohtul (which is Luthor spelled backwards) in Batman: Brave and the Bold (while Kevin Michael Richardson provided the voice of the actual character). Brown once again voiced Lex in the video games Lego Batman 2: DC Super Heroes and Lego Batman 3: Beyond Gotham. From all these vocal appearances, Brown has played Lex Luthor longer than any other actor in history, including Gene Hackman (in the first Superman film saga) as well as his own Justice League co-star Michael Rosenbaum (in Smallville).

Brown is also known for his voice work as villains in various DC animated series, movies, television shows, and video games: Charlie "Big Time" Bigelow on Batman Beyond, Trident on the Teen Titans cartoon series, Mr. Freeze and Bane on The Batman cartoon series, Per Degaton in Batman: The Brave and the Bold, Parallax in the live-action Green Lantern film, King Faraday in the Young Justice cartoon series, and General Zartok in Green Lantern: The Animated Series. Currently, he appears on The CW's TV production of The Flash as recurring guest-star General Wade Eiling.

Brown has also voiced various Marvel characters in various animated projects: Sasquatch on The Incredible Hulk 1996 cartoon series, several characters (George Stacy, Rhino and Ox) on The Spectacular Spider-Man, Mr. Sinister on Wolverine and the X-Men, Odin in Avengers: Earth's Mightiest Heroes, and both Red Hulk and Taskmaster on Hulk and the Agents of S.M.A.S.H. and the Ultimate Spider-Man cartoon series. In Daredevil and The Punisher he plays Major Schoonover, Frank Castle's former commanding officer. In Thor: Ragnarok, he voices the fire demon Surtur.[8]

Brown has been married to Jeanne Johnson since 1993; they have a son, James Johnson-Brown, and a daughter.[9]