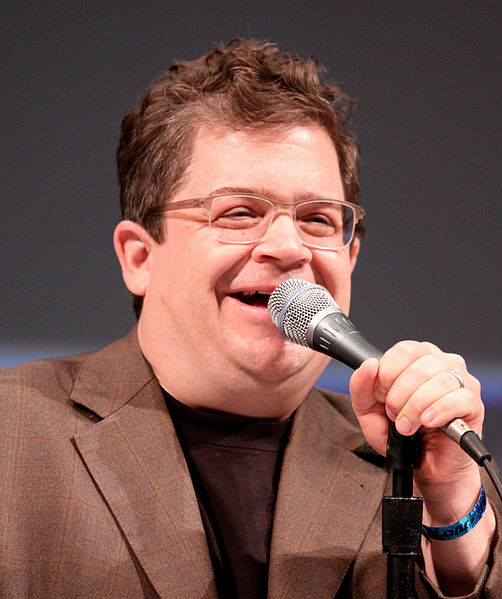 Patton Peter Oswalt (born January 27, 1969) is an American stand-up comedian, actor, voice actor and writer known for roles such as Spencer Olchin in the sitcom The King of Queens (1998-2007), voicing Remy in the film Ratatouille (2007), co-starring alongside Charlize Theron in Young Adult (2011), and playing multiple identical brothers, the Koenigs, on Agents of S.H.I.E.L.D. (2014-2017). Oswalt has appeared in six stand-up specials and won a Primetime Emmy Award for Outstanding Writing for a Variety Special and a Grammy Award for Best Comedy Album for his Netflix special Patton Oswalt: Talking for Clapping (2016).

Oswalt made his acting debut in the Seinfeld episode "The Couch", appeared in the superhero film Blade: Trinity (2004), and starred in the comedy-drama film Big Fan (2009) and the comedy series The Heart, She Holler (2011-2014). He currently narrates the sitcom The Goldbergs (2013-present) as the adult Adam F. Goldberg, voiced male Jesse in both seasons of the video game Minecraft: Story Mode, stars in the 2017 revival of Mystery Science Theater 3000, voices the title character in the crime comedy series Happy! (2017-present) and co-stars as Principal Ralph Durbin on the sitcom A.P. Bio (2018-present).

Oswalt was born January 27,[1][2] 1969,[3] in Portsmouth, Virginia, the son of Carla (née Runfola) and Larry J. Oswalt, a career United States Marine Corps officer.[4] He was named after General George S. Patton.[5] He has one younger brother, Matt Oswalt, a comedy writer best known for the YouTube web series Puddin'. While he was a military brat, his family lived in Ohio and Tustin, California, before settling in Sterling, Virginia.[6] He is a 1987 graduate of Broad Run High School in Ashburn, Virginia. He subsequently graduated from The College of William & Mary, where he majored in English,[7] and was initiated into the Alpha Theta Chapter of the Phi Kappa Tau Fraternity.[8]
Read more...

Oswalt began performing stand-up comedy on July 18, 1988.[9] After writing for MADtv and starring in his own 1996 comedy special for HBO, he went on to garner notable roles in films and television shows, his film debut coming in the 1996 military comedy film Down Periscope alongside Kelsey Grammer and his television debut in a 1994 episode of Seinfeld.[10] His most prominent and long-running role was as Spence Olchin on The King of Queens.[11] His first starring film role was as the voice of Remy, the lead character in the 2007 Pixar film Ratatouille.[10] He has also appeared in smaller roles in such films as Magnolia[10] and 22 Jump Street.

Oswalt wrote the comic book story "JLA: Welcome to the Working Week", a backup story in Batman #600; a story for Dwight T. Albatross's The Goon Noir #01 and a story for Masks: Too Hot for TV.[12] Expanding his voice artist repertoire, he began voicing the villainous character "Tobey" on PBS Kids GO! series WordGirl in 2007.[13] He also appeared on the Comedy Central Roast of William Shatner. In August 2007, he appeared on the Comedy Central Roast of Flavor Flav.[14] In 2007, he appeared on an episode of SpongeBob SquarePants, "The Original Fry Cook", as Jim. In 2008 Oswalt moderated a reunion panel of the Mystery Science Theater 3000 cast at the San Diego Comic-Con International.[15]

In 2009, Oswalt played Paul Aufiero, the leading role in Robert D. Siegel's 2009 directorial debut, Big Fan. He was to star in a 2010 Broadway revival of Lips Together, Teeth Apart.[16] However, the show was postponed then eventually canceled due to Megan Mullally's departure from the production when the director denied her request to replace Oswalt due to his lack of stage experience.[17]

He starred in the Showtime drama The United States of Tara as Neil, an employee of Four Winds Landscaping.[18] He also provided the voice of Thrasher, a robot protagonist from the Cartoon Network show Robotomy.[19]

As of September 2013, Oswalt narrates the TV series The Goldbergs.[22] He also had a recurring role as Constable Bob Sweeney in the fourth season of the FX series Justified.

Patton played the role of Agent Koenig on the TV series Agents of S.H.I.E.L.D. He later appeared in separate episodes as brothers Eric and Billy Koenig. He continued to appear in the second season as Billy and a third brother named Sam.

In January 2015, Oswalt's memoir Silver Screen Fiend: Learning About Life from an Addiction to Film was published by Simon & Schuster. He also voiced the male version of Jesse in Minecraft: Story Mode, which was released in October 2015.

In November 2015, Oswalt was announced to be the second "Mad" to appear in the reboot of Mystery Science Theater 3000, as the son of Frank Conniff's character TV's Frank.[23][24]

Oswalt had a voice over role in science fiction comedy film Sorry to Bother You,[25] which was released in theaters on July 6, 2018.[26]

Oswalt is set to star in The Secret Life of Pets 2, replacing Louis C.K. to voice the film's protagonist, Max.

Oswalt's stand-up comedy covers topics ranging from pop culture frivolity, such as comic book supervillains and 1980s glam metal, to deeper social issues like American excess, materialism, foreign policy and religion. He also discusses his atheism in his stand-up. On February 28, 2009, Oswalt recorded his third comedy album at the Lisner Auditorium at George Washington University in Washington D.C. It premiered on Comedy Central as Patton Oswalt: My Weakness is Strong on August 23, 2009, and was released on DVD August 25, 2009.[27]

In November 2009, an animated video of Patton's take on New Song's Christmas Shoes was posted on YouTube.[28] The track isn't found on any albums. The audio is claimed to be recorded at Lisner Auditorium in Washington DC.[29]

Oswalt's album, Patton Oswalt: Finest Hour, was released on September 19, 2011. The extended and uncensored DVD of this special was released in April 2012, a few days after its television premiere on Comedy Central.[30][31]

Oswalt's comedy special Tragedy Plus Comedy Equals Time was to be released on January 16, 2014 via online movie streaming website Epix, but was pushed back by the company for unknown reasons.[32] However, it did premiere on Comedy Central on April 6, 2014 and became available for purchase on April 8, 2014 in both DVD and CD format.[33]

Oswalt's comedy special Talking for Clapping was released on Netflix on April 22, 2016.[34]

Oswalt's comedy special Annihilation was released on Netflix on October 17, 2017.

Oswalt married true crime writer[38] and journalist Michelle McNamara on September 24, 2005. They had one daughter together, Alice, born in 2009.[39]

On April 21, 2016, McNamara died in her sleep in the family's Los Angeles, California, home. Her death was attributed to a combination of a previously undiagnosed heart condition and complications from prescribed medication (Adderall, Xanax, and Fentanyl). [40] The season-three finale of The Goldbergs was dedicated to her memory. On August 1, 2016, Oswalt announced that he had been working to complete McNamara's nonfiction book on the Golden State Killer, which was left unfinished at the time of her death.[41] In September 2017, Oswalt announced that the book, titled I'll Be Gone in the Dark, was scheduled for release on February 27, 2018, and was subsequently available for preorders.[42] Less than two months after the book's release, on April 25, 2018, the Sacramento County Sheriff's Department announced they had made an arrest in the Golden State Killer case. Oswalt posted a brief video to Instagram, saying: "I think you got him, Michelle."[43] He also posted on Twitter that same day, saying that he hoped to visit the suspect if he was indeed the Golden State Killer, "not to gloat or gawk - to ask him the questions that wanted answered in her 'Letter To An Old Man'" at the end of her book.[44]

In 2013, he teamed up with PETA and spoke out against chaining pet dogs, and sent a letter to the mayor and members of the city council of Newport News, Virginia, urging them to ban the practice.[48]

Oswalt is an atheist[49] and has referenced his atheism in his comedy specials: No Reason to Complain, Feelin' Kinda Patton, My Weakness Is Strong, and Finest Hour.