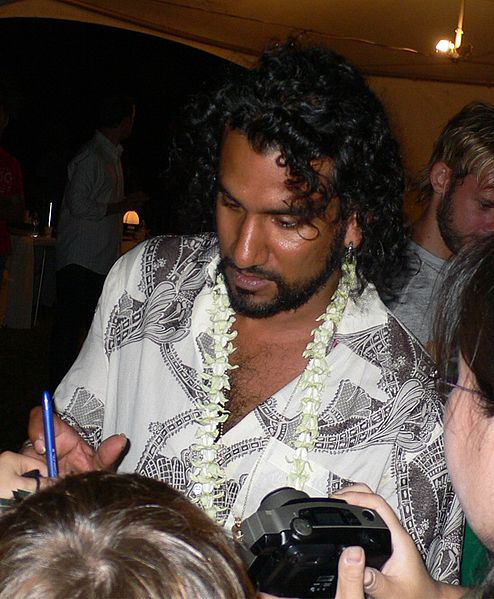 Naveen William Sidney Andrews (born 17 January 1969) is a British actor. He is known for numerous roles, such as Sayid Jarrah in the television series Lost, Kip Singh in the film The English Patient and Sanjay in the 2002 remake of Rollerball. For his role on Lost, Andrews was nominated for a Golden Globe in 2006, a Primetime Emmy Award in 2005 and received the Screen Actors Guild Award for Outstanding Performance by an Ensemble in a Drama Series in 2006.

Andrews was born in Lambeth, London to Nirmala, a psychologist, and Stanley Andrews, a businessman,[1] both Malayali Nasrani immigrants from Kerala, India.[2] He was brought up in Wandsworth in the Methodist denomination of Christianity.[3] Andrews described his upbringing as "very repressive".[3] At the age of 16, while at Emanuel School, he fell in love with his then-30-year-old mathematics teacher, Geraldine Feakins, whom he moved in with to escape his abusive home; their son, Jaisal, was born seven years later, in 1992. Andrews was shunned by his parents after this and they died before a reconciliation. He has stated that he forgives them now.[4]
Read more...

Andrews auditioned for drama school and was accepted at London's Guildhall School of Music and Drama with Ewan McGregor and David Thewlis. His studies paid off when he won a role in Hanif Kureshi's film, London Kills Me (1991). Andrews starred in the 1993 BBC miniseries Buddha of Suburbia. He portrayed "Kip Singh" in The English Patient (1996) and Sayid in the popular television series Lost (2004). In 2006, he was voted one of People magazine's World's Most Beautiful People.[5] He starred in Kama Sutra: A Tale of Love (1996), Mighty Joe Young (1998) and Bride and Prejudice (2004). He recently starred as Jafar in the American fantasy drama Once Upon a Time in Wonderland. In 2014, he provided the voice of Sabal in the video game Far Cry 4. From 2015 to 2017, he starred in the series Sense8 (created by The Wachowskis and J. Michael Straczynski) as Jonas for its two season run. Beginning in 2018, he is co-starring as ex-CIA agent Julian in the series Instinct, starring Alan Cumming and Bojana Novakovic.

Andrews was in a relationship with schoolteacher Geraldine Feakins from 1985 to 1991. They fell in love while Andrews was aged 16. He moved into her home in order to escape an abusive household. His parents shunned him following this and they died without reconciling with their son. Naveen had a son, Jaisal Andrews, in 1992 with Feakins.[6] He was later in a relationship with actress Barbara Hershey in Los Angeles, starting in 1998. The couple separated briefly in 2005 and, during that time, Andrews had a son with Czech-French actress Elena Eustache. He and Hershey later reconciled;[7] however, in May 2010, they announced that they had separated six months earlier.[8][9] He has been involved in an ongoing custody dispute with Eustache over their son, and on 7 January 2009, Andrews was granted sole legal and physical custody of the child.[10]

Andrews has spoken about his alcoholism and his two-year addiction to heroin in the mid-'90s. He has described an incident in which he collapsed on set and was treated by the emergency services.[11]

Report a problem
Write to Naveen Andrews at FanPal • 2023