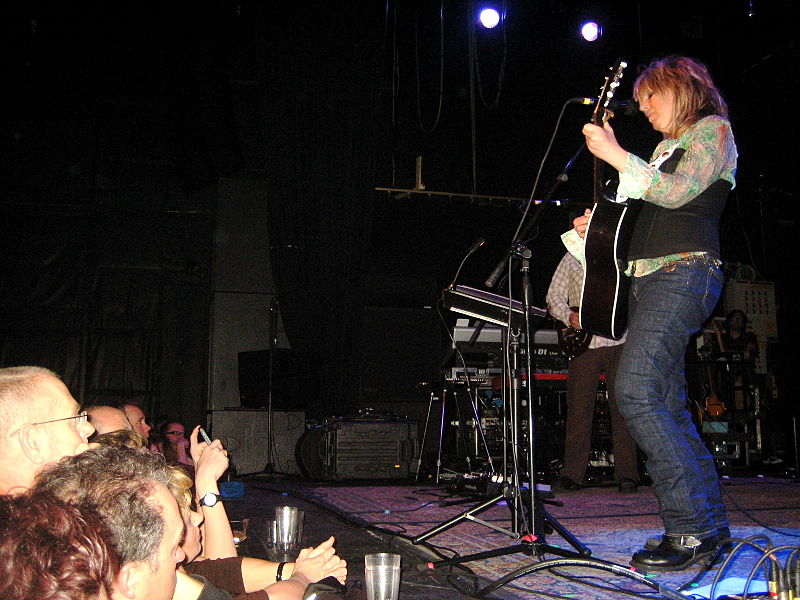 She recorded her first albums in 1978 and 1980 in a traditional country and blues style and received very little attention from radio, the media, or the public. In 1988, she released her self-titled album, Lucinda Williams. This release featured "Passionate Kisses," a song later recorded by Mary Chapin Carpenter, which garnered Williams her first Grammy Award for Best Country Song in 1994.

Known for working slowly, Williams recorded and released only one other album in the next several years, Sweet Old World, in 1992. Her commercial breakthrough came in 1998 with Car Wheels on a Gravel Road, an album presenting a broader scope of songs that fused rock, blues, country and Americana into a distinctive style that remained consistent and commercial in sound. Car Wheels on a Gravel Road, which includes the Grammy nominated track "Can't Let Go", became Williams' greatest commercial success to date. The album was certified Gold by the RIAA and earned Williams a Grammy Award for Best Contemporary Folk Album, while being universally acclaimed by critics. Williams released the critically acclaimed Essence three years later, and the album also became a commercial success. One of the album's tracks, "Get Right With God," earned Williams the Grammy Award for Best Female Rock Vocal Performance in 2002.

Williams has released a string of albums since that have earned her more critical acclaim and commercial success. She has won 3 Grammy Awards, from 15 nominations, and received 2 Americana Awards, from 12 nominations. Additionally, Williams ranked No. 97 on VH1's 100 Greatest Women in Rock & Roll in 1998,[2] and was named "America's best songwriter" by Time magazine in 2002.[3]

Williams was born in Lake Charles, Louisiana, the daughter of poet and literature professor Miller Williams and an amateur pianist, Lucille Fern Day. Her parents divorced in the mid-1960s. Williams's father gained custody of her and her younger brother, Robert Miller, and sister, Karyn Elizabeth. Like her father, she has spina bifida.[4] Her father worked as a visiting professor in Mexico and different parts of the United States, including Baton Rouge; New Orleans; Jackson, Mississippi; and Utah before settling at the University of Arkansas in Fayetteville. Williams never graduated from high school but was accepted into the University of Arkansas.[5] Williams started writing when she was 6 years old and showed an affinity for music at an early age, and was playing guitar at 12. Williams's first live performance was in Mexico City at 17, as part of a duo with her friend, a banjo player named Clark Jones.[6]
Read more...

By her early 20s, Williams was playing publicly in Austin and Houston, Texas, concentrating on a folk-rock-country blend. She moved to Jackson, Mississippi, in 1978 to record her first album, for Smithsonian/Folkways Records. Titled Ramblin' on My Mind, it was a collection of country and blues covers. The album title was shortened to Ramblin' when it was reissued. She followed it up in 1980 with Happy Woman Blues, which consisted of her own material. Neither album received much attention.

In the 1980s, Williams moved to Los Angeles, California (before finally settling in Nashville, Tennessee), where, at times backed by a rock band and at others performing in acoustic settings, she developed a following and a critical reputation. While based in Los Angeles, she was briefly married to Long Ryders drummer Greg Sowders, whom she had met in a club. In 1988 Rough Trade Records released the self-titled Lucinda Williams, which was produced by Gurf Morlix. The single "Changed the Locks", about a broken relationship, received radio play around the country and gained fans among music insiders, including Tom Petty, who would later cover the song.

Its follow-up, Sweet Old World (Chameleon, 1992), also produced by Morlix, is a melancholy album dealing with themes of suicide and death. Williams' biggest success during the early 1990s was as a songwriter. Mary Chapin Carpenter recorded a cover of "Passionate Kisses" (from Lucinda Williams) in 1992, and the song became a smash country hit for which Williams received the Grammy Award for Best Country Song in 1994. Carpenter also received a Grammy for her performance of the song. She duetted with Steve Earle on the song "You're Still Standin' There" from his album I Feel Alright. In 1991, the song "Lucinda Williams" appeared on Vic Chesnutt's album West of Rome.

Williams had garnered considerable critical acclaim, but her commercial success was moderate. Emmylou Harris said of Williams, "She is an example of the best of what country at least says it is, but, for some reason, she's completely out of the loop and I feel strongly that that's country music's loss." Harris recorded the title track from Williams's Sweet Old World for her career-redefining 1995 album, Wrecking Ball.

Williams also gained a reputation as a perfectionist and slow worker when it came to recording; six years would pass before her next album release, though she appeared as a guest on other artists' albums and contributed to several tribute compilations during this period.

Car Wheels on a Gravel Road

The long-awaited release, 1998's Car Wheels on a Gravel Road, was Williams' breakthrough into the mainstream and received a Grammy Award for Best Contemporary Folk Album. Containing the single "Still I Long for Your Kiss" from the Robert Redford film The Horse Whisperer, the album received wide critical notice and soon went gold. The single "Can't Let Go" also enjoyed considerable crossover radio play. Williams toured with Bob Dylan, the Allman Brothers and Tom Petty and the Heartbreakers, and on her own in support of the album. An expanded edition of the album, including three additional studio recordings and a second CD documenting a 1998 concert, was released in 2006.

In 1999, she appeared on Return of the Grievous Angel: A Tribute to Gram Parsons, duetting with David Crosby on the title track of the tribute album.

Williams followed up the success of Car Wheels with Essence (2001). This release features a less produced, more down-tuned approach both musically and lyrically, and moved Williams further from the country music establishment while winning fans in the alternative music world. She won the 2001 Grammy Award for Best Female Rock Vocal Performance for the single "Get Right with God," an atypically uptempo gospel-rock tune from the otherwise rather low-key release. The title track includes a contribution on Hammond organ by alternative country musician Ryan Adams.

Her seventh album, World Without Tears, was released in 2003. A musically adventurous though lyrically downbeat album, this release found Williams experimenting with talking blues stylings and electric blues.

Lucinda Williams at a Lincoln Center Out Of Doors concert in New York City, August 2016

In 2006, Williams recorded a version of the John Hartford classic "Gentle on My Mind," which played over the closing credits of the Will Ferrell film Talladega Nights: The Ballad of Ricky Bobby.

Williams was a guest vocalist on the song "Factory Girls" from Irish punk-folk band Flogging Molly's 2004 album, "Within a Mile of Home," and appeared on Elvis Costello's The Delivery Man. She sings with folk legend Ramblin' Jack Elliott on the track "Careless Darling" from his 2006 release "I Stand Alone."

In 2007, Williams released West, for which she wrote more than 27 songs. The album was released on February 13, 2007. It addresses her mother's death and a tumultuous relationship break-up. Vanity Fair praised it, saying "Lucinda Williams has made the record of a lifetime—part Hank Williams, part Bob Dylan, part Keith Richards circa Exile on Main St. ..."

In the fall of 2007, Williams announced a series of shows in Los Angeles and New York. Playing five nights in each city, she performed her entire catalog on consecutive nights. These albums include the self-titled Lucinda Williams, Sweet Old World, Car Wheels on a Gravel Road, Essence, and World Without Tears. Each night also featured a second set with special guest stars. Some of the many special guests included Steve Earle, Allison Moorer, Mike Campbell, Greg Dulli, E, Ann Wilson, Emmylou Harris, David Byrne, David Johansen, Yo la Tengo, John Doe, Chuck Prophet, Jim Lauderdale and Shelby Lynne. In addition, each night's album set was recorded and made available to the attendees that night. These live recordings are currently available on her website and at her shows.

The next album from Williams wrapped recording in March 2008. Titled Little Honey, it was released on October 14 of that year. It includes 13 songs—among them, "Real Love" and "Little Rock Star," the latter inspired by music celebrities in the press, like Pete Doherty and Amy Winehouse. "Little Honey" also includes a cover of AC/DC's "Long Way to the Top" and "Rarity," inspired by singer-songwriter Mia Doi Todd.[7]

In July 2008, though "Little Honey" had yet to be released, Paste magazine.com listened to an advance copy and rated the duet between Williams and Elvis Costello on the song "Jailhouse Tears" as the No. 5 all-time greatest country/rock duets.

Williams released a cover of Shel Silverstein's "The Ballad of Lucy Jordan" in June 2010 as part of the Twistable, Turnable Man tribute album.[8]

Her 2008 concert appearance at the Catalyst, Santa Cruz, contained an announcement by the city's mayor that September 6, 2008 would henceforth be Lucinda Williams Day[citation needed].

In September 2012, she was featured in a campaign called "30 Songs / 30 Days" to support Half the Sky: Turning Oppression into Opportunity for Women Worldwide, a multi-platform media project inspired by Nicholas Kristof and Sheryl WuDunn's book.[10]

On September 30, 2014, Williams released her eleventh studio album, Down Where the Spirit Meets the Bone, the first album on her Highway 20 Records label.[12]

In 2015, Williams provided backup vocals for the Don Henley song "Train in the Distance" on his album Cass County.[13]

On February 5, 2016, Williams released the album The Ghosts of Highway 20 and performed on The Late Show with Stephen Colbert on February 17, 2016.

On June 29, 2018 Blue Note Records will release Vanished Gardens by Charles Lloyd & the Marvels which features Lucinda on five tracks[14]. Marvels members Bill Frisell and Greg Leisz have previously worked with Williams[15], including on Car Wheels on a Gravel Road.

In May 2017, Lucinda was awarded an Honorary Doctorate of Music from Berklee College of Music during the 2017 Commencement Concert.[16] In June, Rolling Stone named Williams one of the 100 Greatest Country Artists of All Time.[17] Later that year, she re-recorded and expanded her 1992 "Sweet Old World" album, this time titled "This Sweet Old World".[18]

During the 1980s, Williams was briefly married to Long Ryders drummer Greg Sowders. In September 2009 she married Tom Overby, an executive from Best Buy's music department, who is also her manager. The marriage ceremony was performed on stage by her father.[19]

The Americana Awards are presented annually by the Americana Music Association and celebrate outstanding achievement in americana music. Williams is one of the most nominated artists in the history of the awards show with 12, including 2 wins.

The Grammy Awards are awarded annually by the National Academy of Recording Arts and Sciences of the United States for outstanding achievements in the record industry. Williams has received three awards in three separate categories (country, folk and rock) from 15 nominations that span five genres (pop, rock, country, folk and americana).

The American folk/rock band Augustana references the musician in the song "Meet You There," on their studio album Can't Love, Can't Hurt. The lyrics state, "Just put on Lucinda, Baby, and dance with me."[28]

She is also referenced by the character Kathleen "Kat" Hall played by Mireille Enos in the film If I Stay.