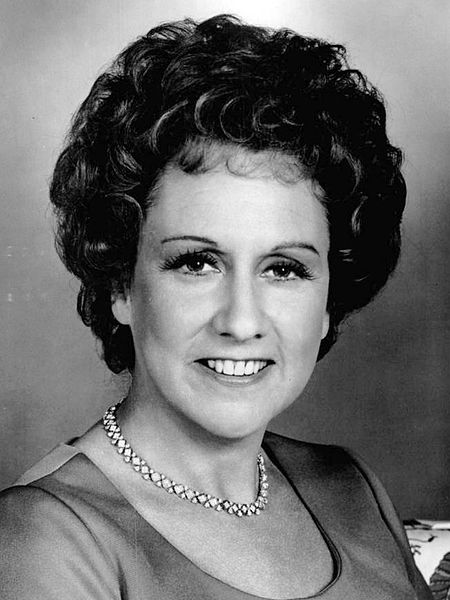 Stapleton is best known for having portrayed Edith Bunker, the long-suffering, yet devoted wife of Archie Bunker, on the 1970s sitcom All in the Family.[1] Stapleton was a three-time recipient of the Prime Time Emmy Award for leading actress in a comedy series and won two Golden Globes in the same category during the show's airing. She also made occasional appearances on the All in the Family follow-up series Archie Bunker's Place, but asked to be written out of the show during the first season due to becoming tired of the role.[1][2]

Stapleton was born on January 19, 1923, in Manhattan, New York City, the daughter of Marie A. (née Stapleton), an opera singer and Joseph E. Murray, a billboard advertising salesman. At age 18, she began her career in 1941 in summer stock theatre and made her New York debut in the Off-Broadway play American Gothic. Stapleton was featured on Broadway theatre in several hit musicals, such as Damn Yankees, Funny Girl, Bells Are Ringing and Juno. She guest starred in many television series, including the role of Rosa Criley in the 1963 episode "The Bride Wore Pink" on NBC's medical drama about psychiatry, The Eleventh Hour .

She recreated her parts in the film musicals of Damn Yankees (1958) and Bells Are Ringing (1960). Stapleton's early work on television included roles in Starlight Theatre, Robert Montgomery Presents, Lux Video Theater, Woman with a Past, The Philco-Goodyear Television Playhouse, The Patty Duke Show, Dr. Kildare,[3] My Three Sons,[3] Car 54, Where Are You?,[3] Dennis the Menace, and Naked City. On the episode "The Hidden Jungle" of The Defenders broadcast on December 1, 1962, Jean Stapleton guest-starred as Mrs. Larsen with future television husband Carroll O'Connor.[3] In 1979, Stapleton appeared in the original Canadian production of the musical Something's Afoot, which was later broadcast on Showtime. At the same time, she played the title role in the Hallmark Hall of Fame television movie, Aunt Mary, which was the true story of Baltimore children's advocate Mary Dobkin.[4] In 1982, Stapleton portrayed Eleanor Roosevelt in a TV movie Eleanor, First Lady of the World,[5] focusing on the subject's later life. In 1998, and for a few years afterward, Stapleton took her "Eleanor" characterization to live theaters, now adapted as a one-woman show.[6] She co-starred with Whoopi Goldberg in Bagdad Cafe, the television series based on the movie of the same name and made a guest appearance September 30, 1978, on the sixth episode of the third season of The Muppet Show.

Stapleton with Carroll O'Connor (left) and guest star James O'Rear, in a 1973 episode of All in the Family

Stapleton's awards for All in the Family include three Emmys[7] and two Golden Globes.[8] In 1971, she bested both Mary Tyler Moore and Marlo Thomas for the Best Actress in a Comedy award on May 9, which happened to be Mother's Day.[9] She was offered a role in the feature film Willy Wonka & the Chocolate Factory as Mrs. Teevee, but she declined because it coincided with the production of the All in the Family pilot (the role went to Nora Denney).[10]

Stapleton appeared in made-for-TV movies and feature films such as Something Wild (1961), Up the Down Staircase (1967), Klute (1971), the comedy Cold Turkey (a 1971 Norman Lear film), Tail Gunner Joe (1977), and the Faerie Tale Theatre episode "Cinderella" as the Fairy Godmother and as the Giant's Wife in "Jack and the Beanstalk". She also had a recurring role on television's Scarecrow and Mrs. King as a British spy. She appeared in the educational series Beakman's World as Beakman's mother, Beakmom.[11] Stapleton co-starred in 1984's feature film The Buddy System with Susan Sarandon and Richard Dreyfuss. She played Ariadne Oliver in the 1986 television adaptation of Dead Man's Folly, opposite Peter Ustinov as Hercule Poirot. However, she declined the opportunity to lead in the television mystery programme Murder, She Wrote, which from 1984 to 1996 instead starred Angela Lansbury.[12] In 1996, Stapleton played opposite John Travolta, portraying the eccentric rooming house owner, Pansy Milbank in Nora Ephron's hit Michael. Stapleton also appeared in the 1998 feature You've Got Mail as a close co-worker in whom Meg Ryan's character confides. On May 14, 2000, in the "Mother's Day" episode of the TV series Touched by an Angel, she played an angel named Emma who came to help Celine who was taking care of her late best friend's mother. In the 1990s, Stapleton played the role of Mrs. Piggle-Wiggle in a children's series of the same name based on the books by Betty MacDonald.[13]

In 1996, Stapleton appeared on Everybody Loves Raymond playing Ray's imperious aunt.[14] That same year, she also appeared in the Murphy Brown episode "All in the Family" playing Miles's grandmother, Nana Silverberg.[15] Making a debut in the world of video games, Stapleton was the voice of Grandma Ollie on KinderActive, Turner Pictures, and New Line Cinema's venture Grandma Ollie's Morphabet Soup. The game won a Teacher's Choice Award from Learning Magazine. On 26 January 1998, Stapleton guest-starred on the Jean Smart sitcom, Style & Substance in the episode "A Recipe for Disaster", playing a former television chef who has an alcohol problem.[16] Stapleton voiced John Rolfe's maid, Mrs. Jenkins, in Disney's 1998 direct-to-video animated film Pocahontas II: Journey to a New World.[17]

Stapleton rarely appeared on talk shows, but she reunited on-camera with O'Connor on Donny and Marie Osmond's show on April 24, 2000, a little over a year before O'Connor's death. When the show's hosts asked her to perform in Edith Bunker's voice, she jokingly told them that she only does so "for pay".[18] Stapleton seldom watched All in the Family, but by 2000 she reconsidered,[19] she said to the Archive of American Television.[12]

A 2001 made-for-TV movie, Like Mother, Like Son: The Strange Story of Sante and Kenny Kimes, starred Mary Tyler Moore as Sante Kimes, Gabriel Olds as Kenny, and Jean Stapleton as Irene Silverman.[20]

For 30 years, Stapleton's husband William Putch (1924-83) directed a summer stock theater, Totem Pole Playhouse, at Caledonia State Park in Fayetteville, Pennsylvania. Stapleton performed regularly at the theatre with the resident company. Together, they had two children: actor/writer/director John Putch and television producer Pamela Putch.[23] Stapleton's brother, Jack Stapleton, was a stage actor. Her cousin was actress Betty Jane Watson.[24] Stapleton was active in the Christian Science church.[25][26] Jean was not, as commonly believed, related patrilineally to the actress Maureen Stapleton.[3]

In New York City on May 31, 2013, Stapleton died of natural causes, surrounded by family and friends.[27] Norman Lear said, "No one gave more profound 'how to be a human being' lessons than Jean Stapleton."[28] Roseanne Barr said that Stapleton's range was "unbelievable, deep, and majestic."[28] Co-star Rob Reiner said, "Working with her was one of the greatest experiences of my life."[28] Sally Struthers said, "Jean lived so in the present. She was a Christian Scientist who didn't say or think a negative thing ... She was just a walking, living angel".[29]

Report a problem
Biography of Jean Stapleton at FanPal • 2023