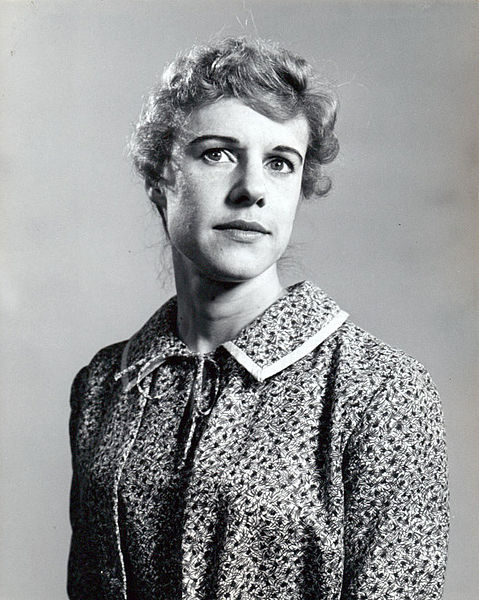 Frances Hussey Sternhagen (born January 13, 1930) is an American actress. Sternhagen has appeared On- and Off-Broadway, in movies, and on TV since the 1950s.[1]

Sternhagen was born in Washington, D.C., the daughter of John M. Sternhagen, a U.S. Tax Court judge, and Gertrude (née Hussey).[2] Sternhagen was educated at the Madeira and Potomac schools in McLean, Virginia. At Vassar College she was elected head of the Drama Club "after silencing a giggling college crowd at a campus dining hall with her interpretation of a scene from Richard II, playing none other than Richard himself". She also studied at the Perry Mansfield School of the Theatre, and New York City's Neighborhood Playhouse.[1]
Read more...

Sternhagen started her career teaching acting, singing and dancing to school children at Milton Academy in Massachusetts, and she herself first performed in 1948 at a Bryn Mawr summer theater in The Glass Menagerie and Angel Street.[1] She went on to work at Washington's Arena Stage from 1953-54, then made her Broadway debut in 1955 as Miss T. Muse in The Skin of Our Teeth. The same year she had her Off-Broadway debut in "Thieves' Carnival" and her TV debut in "The Great Bank Robbery" on "Omnibus" (CBS). By the following year, she had won an off-Broadway Obie Award for "Distinguished Performance (Actress)" in The Admirable Bashville (1955-56).

She has won two Tony awards, for "Best Supporting Actress (Dramatic)": in 1974 for the original Broadway production of Neil Simon's The Good Doctor based on Chekhov stories (which also won her a Drama Desk Award for "Outstanding Featured Actress in a Play"); and in 1995 for the revival of The Heiress, based on the Henry James novella. She has been nominated for Tony awards five other times, including for her roles in the original Broadway casts of Equus (1975) and On Golden Pond (1979), both later made into Oscar-nominated movies with other actresses, as well as for Lorraine Hansberry's The Sign in Sidney Brustein's Window (1972), the musical Angel (1978) which was based on Thomas Wolfe's Look Homeward, Angel, and the 2002 revival of Paul Osborne's Morning's at Seven.

Her best-known Off-Broadway role was her feisty portrayal of the title character in 1988's Pulitzer prize-winning drama Driving Miss Daisy which was originated by Dana Ivey at Playwrights Horizons in New York. Sternhagen took over the role after the show moved to the John Houseman Theatre and played it for more than two years. (Jessica Tandy later won an Academy Award playing Daisy in the 1989 movie.)

Off-Broadway awards include two nominations for the Drama Desk Award for "Outstanding Actress in a Play" in 1998, for a revival of Eugene O'Neill's Long Day's Journey into Night at the Irish Repertory Theatre[3] and in 2005, for the World War I drama Echoes of the War.[1] She also won Distinguished Performance Obie Awards for The Room and A Slight Ache (1964-65). In 1998 she won the Dramatists Guild Fund's Madge Evans & Sidney Kingsley Award for Excellence in Theater.

Sternhagen appeared as The Daughter in the original Broadway production of Edward Albee's All Over in 1971 with Colleen Dewhurst and Jessica Tandy. In the summer of 2005, she starred in the Broadway production of Steel Magnolias along with Marsha Mason, Delta Burke, Christine Ebersole, Lily Rabe, and Rebecca Gayheart. She also starred in the 2005 revival of Edward Albee's Seascape, produced by Lincoln Center Theater at the Booth Theater on Broadway.

In 2013, Sternhagen also won the Obie Award for Lifetime Achievement.[4]

Sternhagen made her film debut in 1967's New York City high school drama Up the Down Staircase, which starred Sandy Dennis.[5] She has worked periodically in Hollywood since then. She had character roles in the 1971 Paddy Chayefsky's classic The Hospital, in Two People (1973) and in Billy Wilder's Fedora (1978). She appeared in Starting Over (1979) which starred Burt Reynolds; with Sean Connery in Outland (1981); and with Michael J. Fox in Bright Lights, Big City (1988). She played Farrah Fawcett's mother in See You in the Morning (1989), Richard Farnsworth's wife in Misery (1990), Lillian in Doc Hollywood (1991) and John Lithgow's psychiatrist in Raising Cain (1992). Sternhagen starred in Frank Darabont's 2007 science fiction horror film The Mist. She also appeared in the family film Dolphin Tale (2011).

She may be best known to TV audiences as Esther Clavin, mother of John Ratzenberger's Boston postman character Cliff Clavin, on the long-running series Cheers for which she received two Emmy Award nominations. She also played Millicent Carter on ER, Bunny MacDougal, mother of Trey, Charlotte's first husband on Sex and the City (another Emmy Award nomination) and in Law & Order, among other network dramas and sitcoms, and worked for many years in soap operas such as Another World, The Secret Storm and Love of Life. She played two roles on the ABC soap opera One Life to Live. She recorded a voiceover for a May 2002 episode of The Simpsons ("The Frying Game").

In summer 2006, she finished her 24th Broadway role, then guest-starred on TV's The Closer, playing Willie Rae Johnson, the mother of Brenda Leigh Johnson, the lead character. Sternhagen appeared in twelve episodes of The Closer, which is no longer in production. She is also recognized as "Mrs. Marsh" from a series of television commercials for Colgate toothpaste that aired in the 1970s.

She read as the title character in the Stephen King novel Dolores Claiborne in a 1995 audiobook recording. She also voiced characters in 13 episodes of CBS Radio Mystery Theater in the 1970s and 1980s.

Sternhagen met her husband, actor and drama teacher Thomas Carlin (who died in 1991), at The Catholic University of America. They had six children - Paul, Amanda, Tony, Sarah, Peter, and John - several of whom are also professional actors and musicians.

Sternhagen is a longtime resident of New Rochelle, New York, where she lives in the Sutton Manor historic district and is honored on the community's "Walk of Fame".