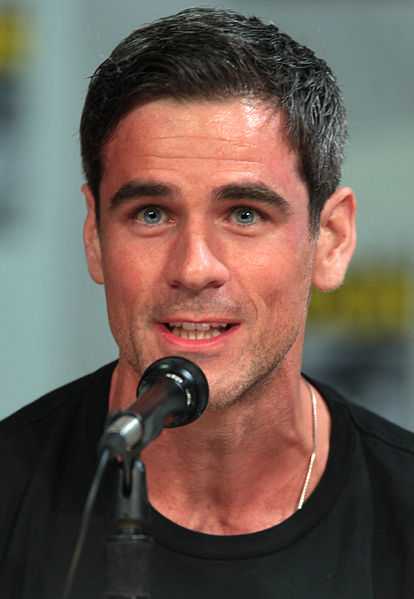 Edmund Patrick "Eddie" Cahill (born January 15, 1978)[1] is an American actor best known for portraying "Miracle on Ice" goalie Jim Craig in the movie Miracle, and for playing the roles of Tag Jones in Friends and Detective Don Flack in CSI: NY. His most recent main role was as District Attorney Conner Wallace in Conviction.

Cahill was born in New York City, New York. He is the middle of three children with an older and a younger sister. He is of Irish descent from his father, a stockbroker, and of Italian descent from his mother, an elementary school teacher.[2][3]

Cahill graduated from Byram Hills High School in Armonk, New York in 1996.[4] He attended Skidmore College in Saratoga Springs, New York[5] and the Atlantic Theater Acting School,[6] part of the Tisch School of the Arts at NYU.[7]

In 2000 Cahill performed in Nicky Silver's Off-Broadway production of The Altruists.[8] He was noticed by Sarah Jessica Parker[9] and shortly after he made several television guest-star appearances including Sex and the City, Felicity, and Law & Order: Special Victims Unit. Cahill was also a recurring guest-star in the NBC sitcom Friends as Rachel's young assistant and boyfriend, Tag Jones. In 2002, he starred in a short-lived WB drama, Glory Days.[10]

In the 2004 hockey movie Miracle, Cahill had the chance to play his boyhood hero, goalie Jim Craig.[11] He had never played the goaltender position prior to the movie,[12] so most of the game-action sequences of Craig were filmed with former NHL goalie Bill Ranford doubling for Cahill, although Cahill did shoot several key sequences from within goal.[13]

When CBS decided in 2004 to create a third CSI series, CSI: NY, to add to its franchise, Cahill was hired to play the cocky, snarky homicide detective, Don Flack, who backs up the team of CSIs and who gets some of the best lines.[14][15] The show ran for nine seasons and he was in all 197 episodes.

Cahill went back to the Atlantic Theater Company in June 2011 and performed at the conclusion of their 25th Anniversary season.[16] He was in Tom Donaghy's one-act play, I Need a Quote, about "a hilarious telephone conversation between a single mother and a home insurance salesman."[17]

In the summer of 2012 Cahill performed in David Adjmi's play, 3C, at the Rattlestick Playwrights Theater in New York City.[18] He played "annoying neighbor Terry, a swinging bachelor true to the era, who unlike everyone else in this play, has no deep feelings at all."[19]

In 2014 Cahill was cast as a main character starting in the second season of the CBS summer drama Under the Dome. He played Sam Verdreaux, a former EMT and reclusive brother-in-law to "Big Jim" Rennie.[20] The series was canceled after three seasons.[21]

Cahill was cast as the male lead in the 2016 ABC legal drama Conviction. He played New York County District Attorney Conner Wallace, who creates the Conviction Integrity Unit, which is set up to re-examine cases where there is a credible suspicion of wrongful conviction.[22] The series was canceled after one season.[23]

On his right shoulder Cahill has a tattoo of his wife's name in a heart with an arrow through it and a swallow on top.[29]