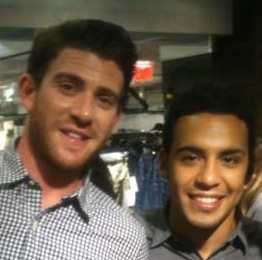 Victor Rasuk is an American actor.

Rasuk was born in New York City, to Dominican parents.[1] His mother worked as a seamstress, and his father at an auto shop.[2] He has one brother, actor Silvestre Rasuk,[3] with whom he starred in Raising Victor Vargas. Rasuk attended performing arts school as a teenager, and began acting at 14.
Read more...

Rasuk portrayed skateboarder Tony Alva in the 2005 biographical drama film Lords of Dogtown. The part included surfing and performing skateboarding tricks. Although the more complicated maneuvers were performed by stuntmen, Rasuk is a method actor and worked on remaining in character both on and off screen. Believing he had mastered skating a huge ramp in only his second week of training, he fractured one of his orbital bones.[4] He says that the accident likely earned him more respect from serious skaters within the cast and crew.

Rasuk starred in the two-season HBO comedy-drama series How to Make It in America.[5] From 2014 to 2015, he starred as Detective Ben Caldwell in the CBS drama series Stalker.

Report a problem
Write to Victor Rasuk at FanPal • 2023