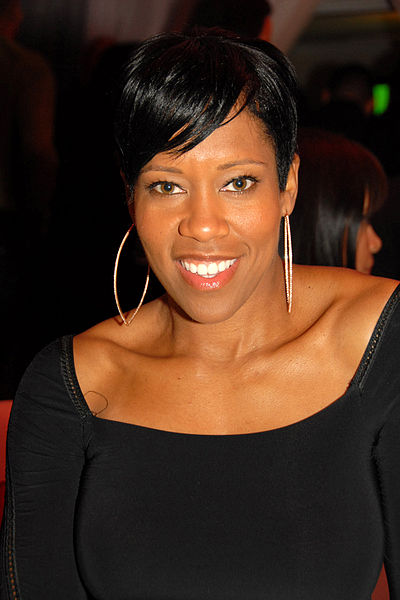 Regina Rene King (born January 15, 1971[3]) is an American Emmy Award winning actress and television director.[4] She became known for her role as Dana in the film Friday (1995), a supporting role in the feature film Jerry Maguire (1996), and for her roles in the television shows The Boondocks and Southland. Her role in Southland earned her two Critics' Choice Award nominations for Best Supporting Actress in a Drama Series in 2012 and 2013.

From 2015 to 2017, she starred in the ABC anthology series American Crime, for which she has received three nominations for Emmy Awards with two wins and was also nominated for a Golden Globe Award. From 2015 to 2017, she also played Erika Murphy on the HBO drama The Leftovers, for which she has received a Critics' Choice Television Award nomination. In 2018, she starred on the Netflix limited series Seven Seconds and earned her third Emmy win. King has a recurring role as Janine Davis on The Big Bang Theory, and has starred in numerous films, including Ray, Poetic Justice, Friday, and Legally Blonde 2.

King began her acting career in 1985 playing the role of Brenda Jenkins on the television series 227,[8] a role she played until the show ended in 1990. She went on to appear in the John Singleton films Boyz n the Hood, Poetic Justice and Higher Learning.[9] In 1995, she was featured in the hit comedy film Friday.[9] In 1996, she starred in the Martin Lawrence dark comedy-romance A Thin Line Between Love and Hate as Mia. Later in 1996 she gained fame starring in the blockbuster romantic comedy film Jerry Maguire as Marcee Tidwell, the wife of Cuba Gooding, Jr.'s character.[9] She played Will Smith's character's wife in Enemy of the State, and was also featured in How Stella Got Her Groove Back, Mighty Joe Young, Down to Earth, Daddy Day Care, Legally Blonde 2: Red, White & Blonde, A Cinderella Story, Ray and Miss Congeniality 2: Armed and Fabulous.[10]

Beginning in the mid-2000s, she had ongoing roles on several TV series, including acclaimed work as the voice of Huey and Riley Freeman for the animated series The Boondocks and Detective Lydia Adams on the TNT police drama Southland. She also appeared in roles on 24, The Big Bang Theory, and Shameless. In 2007 she played Lisa Moore in This Christmas. She was a cast member on ABC's John Ridley-penned ensemble drama American Crime, and played a devout member of the Nation of Islam and sister to a drug addict accused of murder. In September 2015 and September 2016, King won the Primetime Emmy Award for Outstanding Supporting Actress in a Limited Series or a Movie for American Crime.[11] In 2018, she played the role of the mother of a murdered black teenager in Netflix original series Seven Seconds.

Report a problem
Write to Regina King at FanPal • 2023