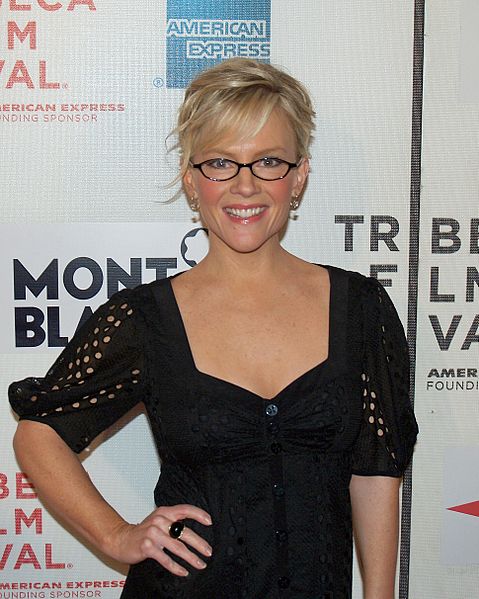 Rachael Elaine Harris (born January 12, 1968) is an American actress and comedian. She is known for her numerous television roles, such as starring as Dr. Linda Martin on Lucifer and as a guest star on TV shows such as Sister, Sister, Reno 911!, New Girl, Suits and The Good Wife.

Off-Broadway, she performed in Love, Loss, and What I Wore.[3]

Harris at the 2007 Tribeca Film Festival.

She debuted on television in a 1993 episode of SeaQuest DSV. After an appearance on Star Trek: Voyager in 1997, Harris went on to a recurring role in The WB's Sister, Sister. Other television credits include a stint as a correspondent for The Daily Show's 2002-2003 season,[2] as well as guest roles on The Sarah Silverman Program, Reno 911!, The West Wing, The Good Guys, Friends, Curb Your Enthusiasm, Monk, CSI: Crime Scene Investigation, and Desperate Housewives in November 2008. Harris played the supporting role of Kevyn Shecket, Kirstie Alley's personal makeup artist, on the Showtime series Fat Actress in 2005.[2] She also appears in Suits as Sheila Sazs, Louis Litt's on-and-off again love interest. She played Cooper in the ABC sitcom Notes from the Underbelly.

Harris hosted Smoking Gun TV in 2004, and has made multiple appearances on such VH1 documentaries as I Love the '80s, I Love the '90s, and Best Week Ever. On ABC's Cougar Town, she played Shanna, a woman that the network describes as being the "nemesis" of Jules.[4] Also on ABC, she made a guest appearance in the Modern Family episode "Caught in the Act" as a Amelia, a restaurateur and mother to a playmate of Lily Pritchett.

In March 2014, Harris began a new role in the very short-lived series Surviving Jack with Chris Meloni.[5] In March 2015, Harris was cast as Linda, Lucifer's therapist in the FOX television series Lucifer.[6]

In 2018, Harris appeared alongside Cheryl Hines on the reality series Hell's Kitchen where they both sat in the blue team's chef's table in the episode "Hell Freezes Over".

Her film credits include roles in Best in Show, A Mighty Wind, For Your Consideration, Kicking & Screaming, and Daddy Day Care.[2] In the 2009 comedy The Hangover she plays Melissa, girlfriend to Ed Helms's character Stu. She previously co-starred with Helms on The Daily Show.[7] She plays the mother of the main character in the film Diary of a Wimpy Kid (2010) and its two sequels.

Harris was born in Worthington, Ohio. She graduated from Worthington High School in 1986 and Otterbein College in 1989, earning a Bachelor of Fine Arts in theatre.[9]