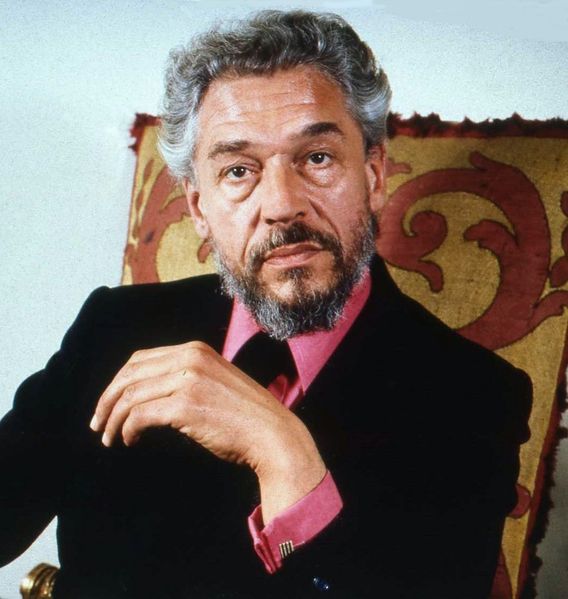 David Paul Scofield CH CBE (21 January 1922 - 19 March 2008) was an English actor of stage and screen who was known for his striking presence, distinctive voice, and for the clarity and effortless intensity of his delivery. Regarded as one of the greatest Shakespearean actors of all time, Scofield preferred the stage over film. This, and his decision to put his family first, has meant that he has never been as well known outside the United Kingdom as some other actors.

Outside his homeland, Scofield is best known for his Academy, Golden Globe, and BAFTA Award- winning performance as Sir Thomas More in the 1966 film A Man for All Seasons. Scofield had originally played the same part on stage in the West End and in a Tony Award-winning performance on Broadway.

Actress Helen Mirren, who appeared with Scofield in the 1989 film When the Whales Came, said of him, "He aspires to the soul rather than the character. He has no sense of personal ambition. He's one of our great, great actors. We're lucky to have him."[2]

In 1990, actor and filmmaker Mel Gibson, who played Scofield's son in Franco Zeffirelli's Hamlet, compared the experience to being "thrown into the ring with Mike Tyson."[3]

Paul Scofield was born in Birmingham, Warwickshire, England, the son of Mary and Edward Harry Scofield.[4] When Scofield was a few weeks old, his family moved to Hurstpierpoint, Sussex, where his father served as the headmaster at the Hurstpierpoint Church of England School.[5] Scofield told his biographer, Garry O'Connor, that his upbringing was divided. His father was an Anglican and his mother a Roman Catholic. Baptised into his mother's faith, Scofield said, "some days we were little Protestants and, on others, we were all devout little Catholics."[6] He added, "A lack of direction in spiritual matters is still with me."[7]

Scofield recalls, "I was a dunce at school. But at the age of twelve I went to Varndean School at Brighton where I discovered Shakespeare. They did one of his plays every year, and I lived just for that."[8][9]

In 1939, Scofield left school at the age of seventeen and began training at the Croydon Repertory Theatre. Shortly after the outbreak of the Second World War, Scofield arrived for a physical examination and was ruled unfit for service in the British Army. He later recalled, "They found I had crossed toes. I was unable to wear boots. I was deeply ashamed."[10]

Scofield began his stage career in 1940 with a debut performance in American playwright Eugene O'Neill's Desire Under the Elms at the Westminster Theatre, and was soon being compared to Laurence Olivier. He played at the Old Rep in Birmingham. From there he went to the Shakespeare Memorial Theatre in Stratford, where he starred in Walter Nugent Monck's 1947 revival of Pericles, Prince of Tyre.[11]

In 1948, Scofield appeared as Hamlet at the Shakespeare Memorial Theatre in Stratford alongside a then unknown Claire Bloom as Ophelia. In her later book, Leaving a Doll's House: A Memoir, Bloom recalls that during the production she had a serious crush on Scofield. As Scofield was happily married and the father of a son, Bloom hoped only "to be flirted with and taken some notice of." Unusually, the production had two Hamlets: Scofield and Robert Helpmann took turns to play the title role. Bloom later recalled, "I could never make up my mind which of my two Hamlets I found the more devastating: the openly homosexual, charismatic Helpmann, or the charming, shy young man from Sussex."[12]

When asked about Claire Bloom decades later, Scofield recalled, "Sixteen years old I think - so very young and necessarily inexperienced, she looked lovely, she acted with a daunting assurance which belied entirely her inexperience of almost timid reticence. She was a very good Ophelia."[13]

Scofield's versatility at the height of his career is exemplified by his starring roles in theatrical productions as diverse as the musical Expresso Bongo (1958) and Peter Brook's celebrated production of King Lear (1962).

In his memoir Threads of Time, director Peter Brook wrote about Scofield's versatility:

The door at the back of the set opened, and a small man entered. He was wearing a black suit, steel-rimmed glasses and holding a suitcase. For a moment we wondered who this stranger was and why he was wandering onto our stage. Then we realised that it was Paul, transformed. His tall body had shrunk; he had become insignificant. The new character now possessed him entirely.[14]

In a career devoted chiefly to the classical theatre, Scofield starred in many Shakespeare plays and played the title role in Ben Jonson's Volpone in Peter Hall's production for the Royal National Theatre (1977). Highlights of his career in modern theatre include the roles of Sir Thomas More in Robert Bolt's A Man for All Seasons (1960); Charles Dyer in Dyer's play Staircase, staged by the Royal Shakespeare Company in 1966; the definitive Laurie in John Osborne's A Hotel in Amsterdam (1968); and Antonio Salieri in the original stage production of Peter Shaffer's Amadeus (1979).

He was subsequently the voice of the Dragon in another play by Robert Bolt, a children's drama The Thwarting of Baron Bolligrew. Expresso Bongo, Staircase and Amadeus were filmed with other actors, but Scofield starred in the screen versions of A Man for All Seasons (1966) and King Lear (1971).

Other major screen roles include the art-obsessed Wehrmacht Colonel von Waldheim in The Train (1964), Strether in a 1977 TV adaptation of Henry James's novel The Ambassadors, Tobias in Edward Albee's A Delicate Balance (1973), Professor Moroi in the film of János Nyíri's If Winter Comes (1980), for BBC Television; Mark Van Doren in Robert Redford's film Quiz Show (1994), and Thomas Danforth in Nicholas Hytner's film adaptation (1996) of Arthur Miller's The Crucible.

According to the DVD extras documentary for the film The Shooting Party (1985), in the very first shot of the very first day of filming, all the male lead actors, including Paul Scofield, who was playing Sir Randolph Nettleby, were to come into shot on a horse-drawn shooting brake driven by the renowned film horse-master George Mossman. As they turned the first corner, the plank that Mossman was standing on broke in two and he was hurled forward and down, falling between the sets of wheels and taking the reins with him. He was struck by a horse's hoof and concussed. The horses shied and broke into a gallop.

Rupert Frazer admitted that he was the first to jump off, landing safely, but bruised. Out of control, the horses turned to the right when confronted by a stone wall, causing the shooting brake to roll completely, catapulting the actors into a pile of scaffolding that had been stacked next to the wall. Robert Hardy stood up and realised to his amazement that he was unhurt. He looked across to see Edward Fox stand up, "turn completely green and collapse in a heap". He had broken five ribs and his shoulder-blade. He noticed that Paul Scofield was lying very still on the ground "and I saw that his shin-bone was sticking out through his trousers". As the film takes place in October during the partridge-shooting season, the filmmakers had to make a choice whether to delay filming for a year or re-cast. James Mason had just finished filming Doctor Fischer of Geneva for the BBC. The Shooting Party schedule was changed to allow him to take over the part of Sir Randolph Nettleby six weeks later.[15] His broken leg also deprived Scofield of the part of O'Brien in Nineteen Eighty-Four, in which he was replaced by Richard Burton.[16]

In 1969, Scofield became the sixth performer to win the Triple Crown of Acting, winning an Emmy Award for Outstanding Single Performance by an Actor in a Leading Role for Male of the Species.

He was also one of only eight actors to win both the Tony and the Oscar for the same role on stage and film, for A Man for All Seasons.

When asked the reason for his decision to decline the knighthood, Scofield responded, "I have every respect for people who are offered and accept it gratefully. It is just not an aspect of life that I would want."[22] Gary O'Connor described being knighted as, "The kind of honour from which instinctively recoiled. Never the actor before the part he plays."[23]

In 2004, a poll of actors of the Royal Shakespeare Company, including Ian McKellen, Donald Sinden, Janet Suzman, Ian Richardson, Antony Sher and Corin Redgrave, acclaimed Scofield's Lear as the greatest Shakespearean performance ever.[24] Scofield appeared in many radio dramas for BBC Radio 4, including in later years plays by Peter Tinniswood: On the Train to Chemnitz (2001) and Anton in Eastbourne (2002). The latter was Tinniswood's last work and was written especially for Scofield, an admirer of Anton Chekhov. He was awarded the 2002 Sam Wanamaker Prize.

Paul Scofield married actress Joy Parker in October 1942. They had met while he played Hamlet to her Ophelia.[25] Scofield later said, "Joy and I simply decided to be married, we were both of age and were determined. Any doubts from our families were overruled and they were the usual ones - too young, etc. We had a week out at the end of The Moon Is Down tour, married during that week, and went straight into the Whitehall Theatre."[26]

Paul and Joy Scofield had two children: Martin (born 1945) who became a Senior Lecturer in English and American literature at the University of Kent[18] and Sarah (born 1951). When asked by Garry O'Connor how he wished to be remembered, Scofield responded, "If you have a family, that is how to be remembered."[27] Filmmaker Michael Winner once described the Scofields as, "one of the few very happily married couples I've ever met."[28]

(For a slightly different, more exhaustive list, see this note.[31])

(for a different and more exhaustive list, see this note.[32])

Report a problem
Write to Paul Scofield at FanPal • 2023