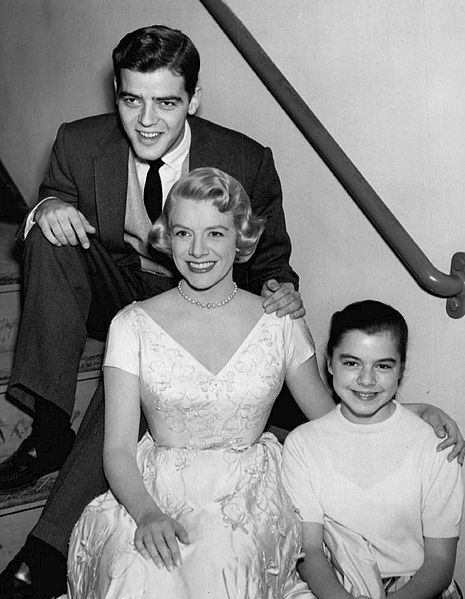 Nicholas Joseph Clooney (born January 13, 1934) is an American journalist, anchorman, and television host. He is the brother of singer Rosemary Clooney and the father of actor George Clooney.

Clooney was born in Maysville, Kentucky, the son of Marie Frances (née Guilfoyle; 1904-1972) and Andrew Joseph Clooney (1902-1974). He was one of five children.[1] His father was of Irish and German descent and his mother was of Irish and English ancestry.[2] While serving as a Corporal in the U.S. Army, he was a disc jockey in the American Forces Network in Germany, hosting the shows Music in the Air and Melody-Go-Round. He then moved to California for a try at show business. When that did not work out, Clooney moved to Ohio, where he met Nina Warren when she was a contestant in a beauty pageant he was judging; they married in August 1959. In addition to his son, George, Nick Clooney has a daughter named Adelia (known as Ada).
Read more...

Clooney had a five-year stint in the 1960s as news anchor at WKYT-TV in Lexington, Kentucky,[3] then went to Ohio to host his own TV show, The Nick Clooney Show, first in Columbus, Ohio, for WLWC television in 1968, then for Cincinnati's WCPO-TV in 1969, and finally with its greatest degree of success for crosstown rival WKRC-TV through the early 1970s. The Nick Clooney Show was a local morning show, with a variety and talk-show format. In December 1974, he gained his first national fame by hosting the short-lived ABC daytime game show The Money Maze. Broadcast nationally on ABC at 4 p.m., WKRC-TV (at the time an ABC affiliate) delayed The Money Maze so it could be seen back-to-back with The Nick Clooney Show at 10:30 and 11 a.m., respectively.

After ABC canceled The Money Maze on July 4, 1975,[4] Clooney returned to WKRC-TV and became the station's news director and lead anchor. As a journalist, he is probably best remembered for his coverage of the 1977 Beverly Hills Supper Club fire and its aftermath, which spanned several years. Many people in the region first heard about the fire from Clooney when WKRC interrupted its Saturday night prime-time schedule to broadcast news of the fire. Clooney pursued a hard news focus that was quite different from the sensationalism often seen on local television. Under his leadership, WKRC-TV became a solid #1 in the local news ratings, dethroning CBS affiliate WCPO-TV, which had controlled ratings for more than two decades under Al Schottelkotte's leadership.

After leaving WKRC in 1984, Clooney then worked in Los Angeles, California, as the 5 p.m. and 11 p.m. co-anchor at KNBC. He returned again to WKRC-TV in the late 1980s, but by that time, NBC affiliate WLWT was number one in the late newscast, with former Cincinnati mayor Jerry Springer as its main anchor; Clooney was not able to lead WKRC back to ratings leadership it enjoyed in the past. He moved on to Salt Lake City, Utah for several years to host the newly created evening news program on the FOX affiliate KSTU. Then in 1994, a short stint as a news anchor for NBC affiliate WGRZ-TV in Buffalo, New York.[5] He resurfaced nationally in television as a host and researcher for the cable channel American Movie Classics, where he introduced and presented backgrounds of classic movies, along with Bob Dorian. In 1999, he returned to his former radio home WSAI in Cincinnati, starting as afternoon host September 13, then moving to mornings in November to replace Bob Braun, who had health problems.[6]

Clooney ran as a Democrat in the 2004 election for a seat in the House of Representatives representing Kentucky's 4th Congressional District. His opponent for the open seat was Republican Geoff Davis. Clooney was recruited to run by Ken Lucas, the outgoing Democratic congressman who had held onto the conservative district with his moderate views. With his name recognition and well-publicized endorsement from Lucas, Clooney was a big favorite to keep the seat in Democratic hands.

Early in 2004, Davis fought through a (sometimes rough) three-way Republican primary. Despite a commanding early lead, when the national media began to report on the electoral contest (due to his famous son George Clooney), his Republican opponents began using the phrase "Hollywood vs the Heartland" to describe the race.[7][8] Clooney's lead began to disappear and he was dealt a blow when both The Kentucky Enquirer and the Community Press newspapers endorsed Davis.

Clooney lost 44% to 54%. During his concession speech, he said his short career in politics was over. He went back to writing a column for The Cincinnati Post three times a week, covering a wide range of topics, until the Post's discontinuation at the end of 2007.

In 2006, Clooney and his son George travelled to Darfur, Sudan, and filmed a documentary, A Journey to Darfur, which was broadcast on American cable TV as well as in United Kingdom and France. In 2008, it was released on DVD with the proceeds from its sale being donated to the International Rescue Committee to help the people of Darfur.[9][10][11][12]

Clooney became a strong activist for Darfur. He has done several open forums and speeches at local high schools in Ohio and Kentucky, and has participated in different rallies for Darfur. On March 16, 2007, following a Darfur rally, Clooney was awarded an honorary Class of 1952 diploma from St. Xavier High School, the high school he attended in Cincinnati before moving to California.[13] On October 11, 2007, Clooney visited Turpin High School in Cincinnati to talk to students about Darfur. The University of Kentucky announced that it would present him with an honorary degree at its 2007 commencement.[14]

Clooney taught Opinion Writing in fall 2008, and in spring 2009, he taught Films that Changed Us, a new course based on his book, The Movies That Changed Us: Reflections on the Screen (Atria, 2002). The book analyzes the significance of such iconic American films as The Birth of a Nation, The Jazz Singer, Dr. Strangelove, Stagecoach, The Graduate, Star Wars and Saving Private Ryan.

Clooney was the commencement speaker for the University of Cincinnati on June 8, 2012 and was awarded an honorary degree the following day.[18]

Report a problem
Write to Nick Clooney at FanPal • 2023