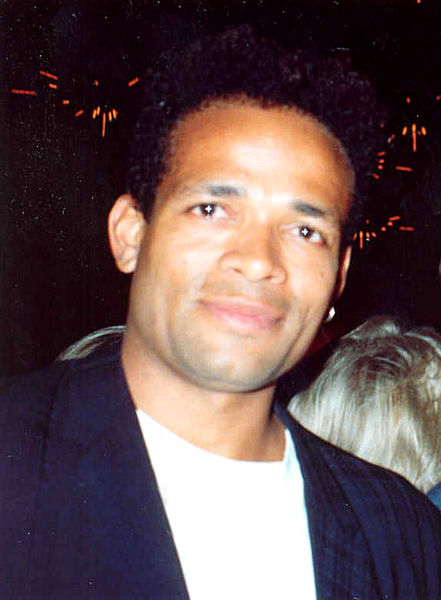 Mario Van Peebles (born January 15, 1957) is an African-American film director and actor best known for directing New Jack City in 1991. He is the son of actor and filmmaker Melvin Van Peebles, whom he portrayed in the 2003 biopic Baadasssss!, which he also co-wrote and directed.

Mario "Chip"[1][2] Cain Van Peebles was born Mario Cain Van Peebles in Mexico City, Mexico, the son of writer, director and actor Melvin Van Peebles and German actress and photographer Maria Marx.[3] He graduated from Saint Thomas More School in Connecticut in 1974 and from Columbia University in 1978 with a bachelor's degree in economics.
Read more...

In 1968, Van Peebles first screen appearance was in the soap opera One Life to Live.[4]

In 1971, he appeared in the film Sweet Sweetback's Baadasssss Song, that Melvin Van Peebles directed and played the lead role in. Mario played his father's character as a child. The film became a hit and an historical American film, because it was widely credited with showing Hollywood that a viable African-American audience existed and thus influenced the creation of the Blaxploitation genre. that year, Mario acted in a TV movie called Crosscurrent.[5]

For the rest of the decade he would not appear in other productions.

In 1981, Van Peebles acted in the miniseries The Sophisticated Gents.[6]

He next appeared in the action film Exterminator 2 (1984), as the main villain against its protagonist, played by Robert Ginty.[7] When the production wrapped, the producers were unhappy and wanted a re-shoot. They replaced the original director, but the main star was no longer available so they made Van Peeble's character more central.[8]

In 1985, he got his first leading role in the film Rappin'.[10] He plays Rappin' John Hood, an ex-convict who attempts to save his neighborhood from developers and hoodlums.

That year he also played in the comedy Delivery Boys, was one of the central characters in the action drama South Bronx Heroes, and acted in the dramatic TV film Children of the Night and one episode of the Cosby Show.[11][12][13]

In 1986, he acted in the urban action film 3:15, the comedy Last Resort, the TV film D.C. Cops, four episodes of L.A. Law, and the Clint Eastwood' military film Heartbreak Ridge based on the United States Marine Corps.

In 1987, he played in the sport film Hotshot, the TV film The Facts of Life Down Under, and Jaws: The Revenge, the fourth installment of the Jaws franchise.

1988 to 1991: Early directorial efforts, and breakthrough

In 1988, Van Peebles played the lead in the short-lived detective show Sonny Spoon. The show ran for two brief seasons, both of which aired in 1988 before the series was canceled. The show would mark his directorial debut, for which he tackled the task for one episode. That same year, he also acted in the TV film The Child Saver.

In 1989, he directed for the show Top of the Hill, three episodes of 21 Jump Street, and one episode of Wiseguy.

His acting efforts of that year were 21 Jump Street - he appeared in two of the episodes he directed, one episode of American Playwrights Theater: The One-Acts, and the film Identity Crisis directed by his father.

At the beginning of the decade he played in the TV film Blue Bayou and one episode of In Living Color .

Also that year, Van Peebles also directed Malcolm Takes a Shot, a CBS Schoolbreak Special about an aspiring high-school basketball star whose obstacles include epilepsy and his own arrogance. Van Peebles appeared in the special in a cameo, as Malcolm's doctor. He was nominated for a "DGA Award" at the Directors Guild of America for "Outstanding Directorial Achievement in Dramatic Shows ".[14]

He made his feature film directorial debut in 1991 with the African American gangster film New Jack City, in which he also co-stars. Its leads are Wesley Snipes as a rising drug-lord and Ice-T as the detective. New Jack City was produced with an estimated $8,000,000 budget. The film initially premiered at the Sundance Film Festival on January 17, 1991 before being released nationally on March 8, 1991; it grossed $7,039,622 during its opening weekend. It became the highest grossing independent film of 1991, grossing a total of $47,624,253 domestically. It was also well received by critics.

Also in 1991 he directed on episode of Gabriel's Fire and acted in the TV film A Triumph of the Heart: The Ricky Bell Story.

In 1993, he starred in and directed the black Western Posse. It features a large ensemble cast, which includes Woody Strode, Billy Zane, Tiny Lister, Tone Lōc, Big Daddy Kane, Robert Hooks, and many more. The film tells the story of a posse of African-American soldiers and one ostracized white soldier, who are all betrayed by a corrupt colonel.

In 1994, he collaborated twice with actor Christopher Lambert; they played the side by side leads in the action film Gunmen, and he was the main villain in Highlander III: The Sorcerer, the third installment of the Highlander film series. He also acted in a film called In the Living Years.

He followed by directing and co-starring in Panther in 1995. It came from a screenplay adapted by his father, Melvin Van Peebles, from his novel of the same name. The film portrays the Black Panther Party for Self-Defense, tracing the organization from its founding through its decline in a compressed timeframe. Creative license is taken but the general trajectory of the Party and its experiences is factual. At the Locarno International Film Festival it won the prize of the Ecumenical Jury, a Silver Leopard, and was nominated for a Golden Leopard. At the Political Film Society it was nominated for a PFS Award.[15]

In 1996, he acted in one episode of Living Single and one episode of HBO's Strangers. He also played the lead in the science fiction action film Solo.

His directorial release that year was Gang in Blue, in which he stars and co-directs with his father who also has a role in the film. It's about a black police officer who discovers a cell of white supremacist vigilantes within his department.

In 1997, he played in one episode of X-Files. Filmwise he acted in Stag, Riot, and Los Locos, the first American film directed by Jean-Marc Vallée.

In 1998, he directed and starred in Love Kills, a comedy about a masseur who gets mixed up in the family plots at the mansion of a recently deceased Beverly Hills millionaire. His acting credits that year were the mini series Mama Flora's Family, Valentine's Day, and Killers in the House.

In 2000, Van Peebles started the new decade by acting in one episodes of Martial Law and 20 episodes of Rude Awakening. In film, he acted in Sally Hemings: An American Scandal and Blowback.

In 2001, he starred in a film called Guardian, and he co-starred in the Michael Mann film Ali for which he received a nomination for "Outstanding Supporting Actor" at the NAACP Image Awards.

In 2002, he acted in 10,000 Black Men Named George, two episodes of Robbery Homicide Division , and the TV movie Fiona.

In 2003, he acted in the film The Hebrew Hammer, 44 Minutes: The North Hollywood Shoot-Out, Gang of Roses, and The Street Lawyer.

His 2003, the docudrama Baadasssss!, also known as How to Get the Man's Foot Outta Your Ass, opened at the Toronto International Film Festival. The film describes the making of his father's seminal film, Sweet Sweetback's Baadasssss Song. Mario directed the film as well as portrayed his father in the lead role. The film was critically acclaimed and garnered numerous awards and nominations in the film festival circuits: it won "Best Feature Film" 2004 Philadelphia Film Festival and was nominated for Best Feature 2004 Gijón International Film Festival. At the 2005 Black Reel Awards, he was nominated for Best Actor, won Best Director, won Best Screenplay, and was nominated for Best Film, and the actress Joy Bryant was nominated Best Supporting Actress. Additionally, Van Peebles received three nominations at 2005 Independent Spirit Awards, and two nominations at 2005 NAACP Image Awards.

In 2004, he was a lead in the TV film Crown Heights and acted in one episode of Soul Food.

In 2006, he directed and co-starred in the film Hard Luck. Wesley Snipes was the lead, and Cybill Shepherd was also in it. Snipes plays Lucky, a down on his luck former criminal and drug dealer whose post prison trials and tribulations take him on a wild adventure. The film was released by Sony.

In 2007, he acted in one episode of Law & Order and the film Sharpshooter.[17][18] That year, he returned to directing for television starting with three episodes of Damages, in which he also had recurring role until 2009.[19]

In 2008, he acted in his father's film Confessionsofa Ex-Doofus-ItchyFooted Mutha and 43 episodes of the soap opera All My Children. He returned to Law & Order as a director for three episodes.

In 2009, Van Peebles and his family starred in the reality TV show Mario's Green House. He also acted in the film A Letter to Dad.

In 2010, he acted in two films Multiple Sarcasms and Across the Line: The Exodus of Charlie Wright.[20][21] He directed one episode of Lost, the documentary Fair Game?, and the film Redemption Road.

In 2011, he directed the sport drama All Things Fall Apart starring rapper/actor 50 cent in the title role playing a football player who suffers from a deadly disease; Van Peebles also played a role in this feature. His acting credits that year were the films Tied to a Chair and 5th & Alameda. He also acted in two episodes of Hellcats and two episodes of The Game. That year, he also started to direct for the TV series Boss and would direct five episodes until 2012.

In 2012, he wrote, directed, and acted in We the Party. It is a comedy set in an ethnically diverse Los Angeles high school. The film focuses on five friends as they deal with romance, money, prom, college, sex, bullies, Facebook, fitting in, standing out, and finding themselves. Also that year, he acted in one episode of The Finder and the feature film American Warship.

The following year, he directed two additional episodes of Nashville the following year as well acted in one, and in 2015, he reprised his role with another director.[25]

In 2014, Van Peebles wrote, directed, and acted in Red Sky. The film is an action/thriller starring Cam Gigandet, Shane West, and Rachael Leigh Cook.[26] He also directed three episodes of Once Upon a Time,[27] and that year, he acted in two other films Mantervention and Drumline: A New Beat.[28][29]

Also in 2016, he directed the film USS Indianapolis: Men of Courage based largely on the true story of the loss of the ship in the closing stages of the Second World War. The film stars Nicolas Cage, Tom Sizemore, Thomas Jane, Matt Lanter, Brian Presley, and Cody Walker. He also directed one episode of Roots[36] andacted in the feature film Submerged.[37]

In 2017, he acted in four episodes of Bloodline, one of which he also directed, and he directed an additional episode his character didn't appear in.[38] That year, he created and produced the TV series Superstition, directed eight episodes, and acted in ten, and in some of them he performed both roles.[39]