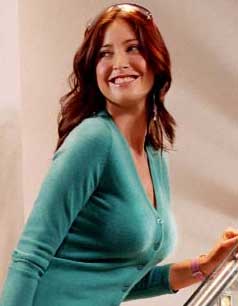 Lisa Snowdon[1][2] (born Lisa Snawdon on 23 January 1972) is an English television and radio presenter and fashion model. She was the host of the Living TV reality television show Britain's Next Top Model from 2006 until 2009. She also co-presented Capital Breakfast on Capital London from 2008 until 18 December 2015.

Snowdon was born to insurance salesman Nigel and hairdresser Lydia Snawdon. She has two younger sisters.[3]

Educated at Sir Frederic Osborn School,[1] she gained a scholarship to the Italia Conti Academy of Theatre Arts, where her classmates included Naomi Campbell. She auditioned for the Minipops.[citation needed] After gaining too much additional height, and after her parents split up when she was 17, Snowdon stayed in London and worked briefly as a dance and yoga teacher.[4]

A fan of Christy Turlington from age 14, Snowdon never thought about becoming a model.[5] Spotted by a Premier Model Management agent at age 19 while pole-dancing at a rave at London's MFI club,[1][6] she was auditioned and signed up. Changing her surname to Snowdon,[1] she started working with renowned photographers and became one of Britain's Top Fashion Models, commanding at peak a £100,000 fee per shoot.[1]

Snowdon is best known for her beauty commercials and high-fashion cover and spread modelling, including cover shots for Vogue, Marie Claire and Elle; she was also the face for Gucci.[citation needed] She went on to be the "elevator girl" for Lynx deodorant (Axe in certain countries) in 2003,[citation needed] appeared in advertisements for Mercedes-Benz, Dove soap, and Kelloggs Special K,[1] and was the face of campaigns for Neutrogena and After Eight mint straws, the Taxiwise safety campaign and numerous catalogues.[citation needed] Her modelling career led to appearances in Maxim, Arena, Loaded and GQ. She featured on FHM's List of FHM 100 Sexiest Women every year between 1996 and 2007 except for 1998.[citation needed]

Snowdon returned to modelling when she became the face and model of Avon lingerie, and was one of the models for the Marks & Spencer autumn 2010 campaign.[6] From 2010-2014 she was the face of Belvita breakfast biscuits, having appeared in adverts for the biscuits with fellow Capital FM DJ Johnny Vaughan. In 2015 she was appointed the lead-UK model for Triumph International.[7]

Snowdon's first presenting role was on MTV UK's MTV Select. She would later host a number of other MTV shows before moving to do voice-overs on VH1 and host Lisa Snowdon's All Access for VH1.[citation needed] She took over the role from Lisa Butcher as the "supermodel" judge and host on Britain's Next Top Model.[5] Snowdon left the show to concentrate on her radio show and was replaced by Elle Macpherson as of season six.[8] This later role led to a series of stand-in and guest presenting roles on British terrestrial television, where in June 2007 she guest-presented the BBC's Sunday morning show Something for the Weekend, and, in August, Channel 4's tea time show Richard & Judy alongside David Walliams.[citation needed] In autumn 2007, she was announced as the new co-presenter of Through the Keyhole with Sir David Frost on BBC One. She was a guest panellist on Loose Women in November 2009.[citation needed] She was a guest on the 4th episode of The Real Hustle: Celebrity Scammers where she performed a long con where she had to convince someone that a cheap painting was worth a fortune. The scam was called 'The Art Attack'.[citation needed]

In 2014, Lisa co-hosted Weekend Kitchen with Waitrose with Steve Jones. The show aired on Saturday mornings on Channel 4.[11]

In August 2016, Snowdon guest presented five episodes of Lorraine, standing in for Lorraine Kelly.[12] In November 2016, Snowdon was confirmed as a contestant for the sixteenth series of I'm a Celebrity...Get Me Out of Here!. She was voted off as the second celebrity to leave the jungle coming in second last place to her camp-mate Danny Baker.

Snowdon took part in the sixth series of Strictly Come Dancing on the BBC paired with former champion Brendan Cole,[13] competing against other celebrities. Snowdon started off badly, scoring only 22 points out of 40 for her salsa, but she quickly rebounded, scoring 32 points for her second dance. Snowdon's Ballroom dances in particular were very impressive,[citation needed] rewarded no less than 35 judges points for each dance, though most of her Latin dances weren't so warmly received.

Despite her mediocre performance in the first week, Snowdon continuously improved over the course of the series. She received 9 from all judges for her sixth dance, the Viennese Waltz, her first 10 (from a total of 39) for her Foxtrot, and culminating with both her Quickstep and a repeat of her Foxtrot in the finale, getting a perfect 40 out of 40 from the judges. As well as her Ballroom dances, her Latin dances also improved greatly. Snowdon finally received a 10 for her Latin dance in week 10, for her Cha-cha-cha, and later when she danced again in the finale, she received perfect 40 points as well, making Snowdon the first contestant to get three perfect scores from the judges. Despite achieving multiple perfect scores in the final three, she came third on the show.[14][15]

In December 2015, Snowdon was announced as one of the 2015 Strictly Come Dancing Christmas Special contestants, featuring six returning contestants including four former champions.[16] She was partnered with 2014 Strictly champion Pasha Kovalev,[17] dancing the Quickstep to "Let It Snow!". After earning 37 points from the judges, they eventually lost to series 9 winner Harry Judd.[18]

At the end of August 2008, it was announced that Snowdon was to be the permanent replacement for Denise van Outen on Capital London as co-host with Jonny Vaughan.[19][20] In January 2010, the pair signed a two-year deal to continue presenting the show.[21] On 1 December 2011 it was confirmed she would remain at Capital.[22] She has been given the nickname 'Eggy' on the show by colleague Dave Berry after her penchant for boiled eggs and the smell they give in the studio. On 13 November 2015 she announced that she would be leaving Capital Breakfast at the end of 2015.[23]

In 2008, Snowdon participated in a celebrity edition of The Apprentice as part of the BBC's biennial Sport Relief event. In 2010, she became an Ambassador of Capital FM's Help a Capital Child charity.[26]

In November 2010, after turning on the Bond Street Christmas Lights, Snowdon was rushed to hospital and diagnosed with viral meningitis.[27] As a result, she began raising money and acting as an ambassador for the Meningitis Trust.

Snowdon has dated fellow model Paul Sculfor as well as rapper David Loeffler of American band E.Y.C. for two and a half years.[1] Snowdon was in a five-year on/off relationship with actor George Clooney. The pair met when shooting an advertisement for Martini in 2000,[1][28] with their relationship well reported in the tabloids on both sides of the Atlantic.[3] After 14 months of dating Snowdon revealed in 2017 her engagement to her boyfriend, George Smart.[29] When Snowdon appeared on I'm a Celebrity...Get Me Out of Here!, she revealed that a series of difficult relationships were what put her off having children.

Snowdon lives in Epping Forest,[3] and has a flat in Camden, north London, which she uses during the week.[30]

Report a problem
Write to Lisa Snowdon at FanPal • 2023