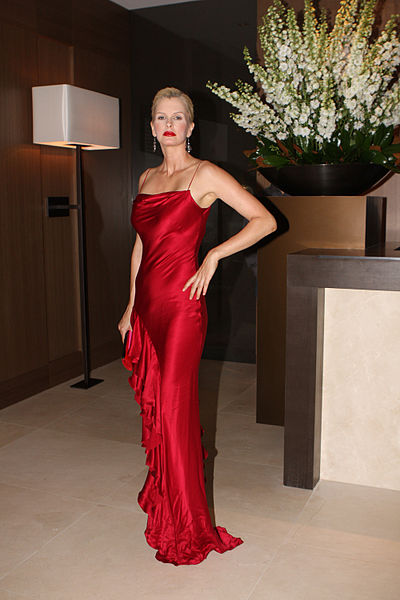 Kylie Bax (/ˈkaɪliː/; born 5 January 1975) is a New Zealand-born model and actress.[1][3] She has appeared on international magazine covers, including Vogue and Marie Claire. During her twenties, Bax had supporting roles in action and comedy films.

Having been a teen beauty queen, Bax was first discovered in a New Zealand shopping mall by an agent from the modeling agency Clyne Model Management. After discovering her marketing abilities as a fashion model, she soon moved to New York to work as a model. Bax became Steven Meisel's protégé. She went on to work with top photographers such as Karl Lagerfeld, Helmut Newton, and Richard Avedon. Once discovered, she became an international modeling success, signing with Women in New York, Marilyn in Paris, and Storm in London. She has appeared on numerous international magazine covers, including Vogue, Marie Claire, Harper's Bazaar & Mode Australia, Maxim, Vanity Fair, and ELLE. She has also appeared on more than twenty Vogue covers around the world.

In 2009, Bax sued the French men's magazine Max Magazine for using bare-breasted images of her on its magazine wrapper. No photos of her were inside the publication. [1] Her lawsuit cited that the "sexualised nature of the photographs was inconsistent with the image that she had sought to develop".[1] The images had been taken about six years earlier, and she was not compensated for their use by Max Magazine, and the photographer was assured that they would not be published without her consent.[1]

Between 1999 and 2005, Bax played supporting roles in eight different films.

Bax grew up on her parents' horse-breeding farm in Thames, New Zealand.[3] As of 2015, Bax and her estranged husband are embroiled in a contentious divorce.[4] In 2016 and 2017, Bax publicly supported the election of Donald Trump as President of the United States.[5]

Report a problem
Write to Kylie Bax at FanPal • 2023