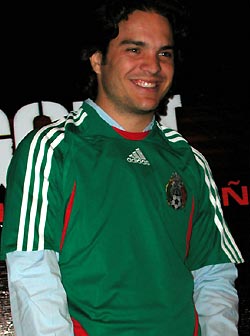 Eduardo Kuno Becker Paz (born January 14, 1978) is a Mexican actor who has worked in telenovelas, Mexican cinema and U.S. cinema, but is best known for his portrayal of Ruben Berrizabal in Soñadoras and Santiago Muñez in the football movie Goal! and following sequels.

He also starred as Drew Ramos on the American drama series Dallas.

Becker's career as an artist began at an early age, although not as an actor but as a musician. When he was six years old, he intended to become a professional violinist. After obtaining a scholarship, he traveled to Europe and began his studies at the Mozarteum in the city of Salzburg, Austria, where he spent several years taking violin lessons with Ruggiero Ricci.

At seventeen Kuno made the decision to set aside his career as a violinist, in order to pursue what he now considers his greatest passion, acting. He auditioned with more than 3,200 candidates and was accepted as a student at the Centro de Educación Artística (CEA) of Televisa.

At the age of nineteen, after two years of drama studies, he obtained his first role in the telenovela Para toda la vida (1996). He later participated in 1997, in the music video Corazón by Lynda Thomas, the telenovela Pueblo chico, infierno grande (with Verónica Castro and directed by José Alberto Castro), El Alma no Tiene Color (directed by Juan Osorio) Desencuentro (directed by Ernesto Alonso), Rencor Apasionado (directed by Lucero Suárez), Camila (directed by Angelli Nesma) and Soñadoras his first lead and breakthrough role. In April 2000 Becker concluded shooting the telenovela Mujeres Engañadas.

In addition to his work in television, Becker has participated in a couple theatre productions with Televisa. In 1998 he worked in the musical comedy En Roma el Amor es Broma. His latest theatre production was in 2008 when he starred in and produced the critically acclaimed "The Pillowman" written by Martin McDonagh.

In cinema he provided the voice of Cale, Tobias and Lightning McQueen for the Spanish-dubbing of animated films Titan A.E., The 3 Wise Men and Disney's Cars. He also appeared in the 1997 film La Primera Noche. In 2002 Becker starred in the film La Hija del caníbal (Lucía, Lucía) opposite the Argentine actress Cecilia Roth. Later he starred opposite Antonio Banderas and Oscar winner Emma Thompson in the drama-thriller Imagining Argentina. Becker also starred in the historical Kazakhstani epic Nomad filmed in 2004. The production took two years to make and it hit screens in 2006. He also starred in ESL: English as a Second Language with Maria Conchita Alonso and Soledad St. Hilaire released in 2005. He also landed the lead role of Santiago Munez in the films Goal! in 2005, Goal! 2: Living the Dream... in 2007 and the final entry in the trilogy, Goal! 3 in 2009.

He worked on his debut screenplay for the Mexican film Espacio Interior, which is based on the earthquake that hit Mexico in 1985. He also portrayed Esteban Navarro, a recurring antagonist, in the tenth season of CSI: Miami.

Report a problem
Write to Kuno Becker at FanPal • 2023