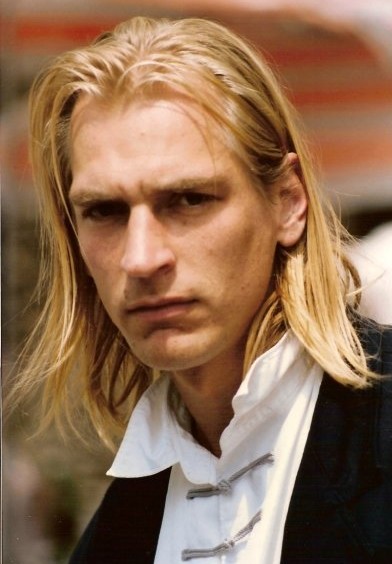 Julian Richard Morley Sands[1] (born 4 January 1958) is an English actor known for his roles in films such as The Killing Fields, A Room with a View, Warlock, Arachnophobia, and Vatel. On television, he is known for playing Vladimir Bierko in 24, and Jor-El in Smallville.

Julian Sands began his film career appearing in supporting roles in films, including Oxford Blues (1984) and The Killing Fields (1984). He also had a cameo as a Greek soldier in the BBC adaptation of The Box of Delights in 1984.[2] He was cast as the romantic lead in the 1985 film A Room with a View. In 1985, following the success of A Room with a View and Ken Russell's Gothic (1986) Sands decided to move to Hollywood and pursue a career in American films. He appeared in several of them—both lower-tier and higher-budget.

He played the title role in the horror film Warlock (1989) and its sequel, Warlock: The Armageddon (1993), the role of Franz Liszt in Impromptu (1991), the role of Yves Cloquet in Naked Lunch (1991), and prominent roles in Arachnophobia (1990), Boxing Helena (1993) and Leaving Las Vegas (1995). He played "Erik, aka the Phantom" in the 1998 horror-film version of The Phantom of the Opera. He starred opposite Jackie Chan in the action-comedy film The Medallion (2003). And he played Lord Olivier in BBC Four's In Praise of Hardcore (2005), a drama about the critic and impresario Kenneth Tynan.[3]

In television work, he was the voice of Valmont in the Jackie Chan Adventures cartoon (Seasons 1 and 2) (succeeded by the British actors Andrew Ableson and Greg Ellis in the remaining seasons). He played the Doci of the Ori in two episodes of Stargate SG-1—in its ninth and tenth seasons (a role he reprised in the film, Stargate: the Ark of Truth). He played a college professor in a Season One episode of The L Word. In 2001, he starred in Stephen King's Rose Red. Sands portrayed Austrian ambassador Klemens von Metternich in the 2002 miniseries Napoléon. In the 2006 season of 24, he played terrorist Vladimir Bierko.[4]

Sands played Jor-El, Superman's biological father on Smallville, and reprised the role in the series' final (tenth) season. In 2009, he played Reg Hunt in Bollywood Hero.[5] In 2012, he played Alistair Wesley in the seventh episode of the second season of Person of Interest.[4]

In 2011, Sands appeared in the mystery thriller film The Girl with the Dragon Tattoo, an English-language remake of the original version, as the younger version of Henrik Vanger. In 2012, Sands voiced the character of DeFalco in Call of Duty: Black Ops 2. On 26 April 2013, it was announced that Sands would appear as Miles Castner, a wealthy international businessman during the eighth season of Dexter.[10]

Sands was born in Otley, Yorkshire and educated at Lord Wandsworth College, Long Sutton, Hampshire. He has a sister and four brothers, one of whom, Quentin, was selected by She magazine as "Britain's Sexiest Man" of 1998.[11]

Sands' first marriage was to Sarah Harvey, a British journalist. They have one child, Henry Morley Sands (born 20 September 1985); the couple divorced in 1987.[12] In 1990, he wed Evgenia Citkowitz (born 1964), a journalist and the daughter of the Anglo-Irish novelist and socialite Lady Caroline Blackwood and American composer-pianist Israel Citkowitz. Sands and Citkowitz have two daughters Natalya (14 August 1996) and Imogen (31 December 1999).

Julian Sands at the 1990 Cannes Film Festival. He had grown his hair long for the character of Franz Liszt in Impromptu.