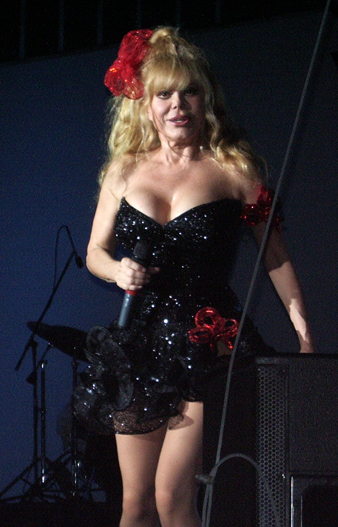 Charo began playing guitar at the age of nine and trained under the famed Andrés Segovia. In 1966, she married bandleader Xavier Cugat and they moved to the United States. In the late 1960s and 1970s, she became a ubiquitous presence on American television, frequently appearing as a guest star on series like Laugh-In, Fantasy Island, The Love Boat and "The Tonight Show Starring Johnny Carson". She is known for her uninhibited and exuberant manner, ostensible lack of fluency in English, and heavy Spanish accent, and the catch-phrase "cuchi-cuchi".

As a musician, she has performed and recorded in various styles for five decades. She released a series of disco recordings in the 1970s with Salsoul Records, most notably Dance a Little Bit Closer (1977). In 1995, her flamenco album Guitar Passion (1994) won the Female Pop Album of the Year award at the Billboard International Latin Music Conference and was named best female Latin pop album by Billboard.[2][3] In an interview Charo said "around the world I am known as a great musician. But, in America I am known as the cuchi-cuchi girl. That’s okay because cuchi-cuchi has taken me all the way to the bank."[3]

Born as María del Rosario Mercedes Pilar Martínez Molina Baeza, her official date of birth is listed as January 15, 1951 (though original documents from Spain report her birth date as March 13, 1941)[4] in Molina de Segura, Region of Murcia, Spain. Her father was reportedly a lawyer who fled to Casablanca during the dictatorship of Francisco Franco, while her homemaker mother stayed behind in Murcia, raising their children.[citation needed]

Charo has occasionally claimed that she was enrolled in a convent as a young child and remained there until she was 15, when a nun stated that she belonged in show business.[5] In the most colorful version of this childhood, Charo's grandmother hired a music professor to give her weekly classical guitar lessons, and he became the first man to enter the convent.[6]

Most sources indicate that she studied classical and flamenco guitar in a school in Madrid founded by Andrés Segovia for underprivileged children.[citation needed] In a 2005 interview, she reminisced: "The institution had great young teachers and students. Everything was a charity. Mr. Segovia, between concerts that's when he'd come, and if you'd been there a year and you weren't good, you'd go out and they would give your place to another young kid."[7] Charo has stated in several interviews that she graduated with honors at age 16.[8][9]

Charo was discovered as a young performer by bandleader Xavier Cugat, whom she later wed on 7 August 1966. When they married, Cugat was 66 and had already been married four times (Rita Montaner, Carmen Castillo, Lorraine Allen and Abbe Lane) although reports sometimes listed fewer marriages. An April 1966 column by Earl Wilson on the couple's wedding plans announced, "Sixty-year-old [sic] Xavier Cugat and his 20-year-old [sic] Spanish girlfriend and singing star Charo hope to marry in San Cugat, Spain, in a few days if Cugat can convince church authorities his two divorces should not be counted against him since he wasn't married in church."[10]

The couple was the first to have their nuptials in Caesars Palace in Las Vegas. She later claimed that her marriage to Cugat had been merely a business contract, a way for him to legally bring her over to the United States where he was based.[11]

She moved to West 257th Street in The Bronx, New York with her mother and aunt, and was regularly featured in shows with Cugat's orchestra in New York and Las Vegas, as well as in overseas engagements in Latin America and Europe. She claims he was confident in her eventual success from early on, and that she gave him a Rolls-Royce as a parting gift once she legally came of majority age.[citation needed]

Charo's first US TV appearance was on The Today Show. From 1965-67, she performed on The Ed Sullivan Show four times with her husband Xavier Cugat and his orchestra. She appeared on Laugh-In in 1968. She would appear on short chatfests for a few minutes near the end of the show with Dan Rowan and Dick Martin. Her almost complete lack of fluency in the English language was played as a comic focus, with the two hosts laughing at her mangled English. It was around this time that she began using "cuchi cuchi" in the public arena.

She was headlining Vegas shows by 1971 and reportedly being paid as much as Frank Sinatra, Ray Charles or Dean Martin. In 1977, she became a naturalized citizen of the United States. That same year she filed for divorce from Cugat, a petition that was granted April 14, 1978.[12]

On August 11, 1978, she married her second husband, Kjell Rasten, a producer, in South Lake Tahoe, California, in a civil ceremony attended by 30 guests.[13] Rasten soon became his wife's manager and the couple has one child, a son, Shel Rasten (born 1981), who is the drummer for the heavy metal band Treazen.[citation needed]

Throughout the 1970s, she was a highly visible personality, appearing eight times on The Love Boat, as well as on variety and talk shows such as Donny & Marie,[14] Tony Orlando and Dawn,[15] The Captain and Tennille,[16] The John Davidson Show, The Mike Douglas Show, which she guest-hosted at least once,[17] and the short-lived Brady Bunch variety spinoff.[18]

In 1975, Dallas Morning News critic Harry Bowman wrote that the ABC network had "penciled in ... a half-hour comedy starring the uninhibited wife of Xavier Cugat" and commented, "This is probably the worst idea of the season."[19] By October of that year, the performer was promoting a special slated for November,[20] but the special did not actually appear until May 1976.[21][22]

A TV listing for August 24, 1976, shows what appears to be an unsold pilot airing on ABC at 8:30 pm CST: "Charo and the Sergeant - Situation comedy starring Charo Cugat. Charo's first U.S. job is to be a dancer at an off-limits night club and her conservative Marine Corps husband finds out. The few episodes that were taped ended up being broadcast on the American Armed Forces Network overseas."[23]

By the late 1970s, Charo was being mentioned as an example of how overexposure could damage a celebrity. One such article quoted the "Q score" of Performer Q, Steve Levitt's celebrity popularity rating service, to show that the performer's popularity declined slightly even as her familiarity increased:

Before she gained national fame on talk shows in 1975, bosomy Latina starlet Charo was 'recognized' by 57 percent of Levitt's national television sample and had a 'popularity quotient' of 9 percent. Today, known by 80 percent, a figure as high as Clint Eastwood's 80 percent, Charo's popularity is 8 percent. 'If she was known by 100 percent of the world, chances are her popularity might go down to 7 or 6 percent', Levitt says coolly. That paradox makes some performers think twice when invitations to talk shows come in.

For much of the late 1980s and 1990s, Charo had limited visibility as she moved to Hawaii and opened and performed at her own dinner theater while she and Rasten raised their son. Because of the large number of people of Japanese descent in Hawaii, Charo learned to speak Japanese.[24]

In the 2000s, she returned to television in commercials for Sprint wireless phone service and GEICO insurance, as well as guest appearances on Hollywood Squares, a season-three stint on the celeb-reality series The Surreal Life, portraying herself on an episode of Fox Network's That '70s Show, and appearances in VH1's I Love the '70s retrospectives. On May 11, 2008, she made a guest appearance on the Latin-themed VH1 reality show Viva Hollywood.[citation needed]

She now has a regular touring show in addition to appearances in Branson, Missouri, and Las Vegas (which at one time were choreographed by Comedy Central actor/dancer Jade Esteban Estrada). Charo appeared as the Celebrity Showtime entertainer aboard Royal Caribbean Explorer of the Seas on its January 4 and January 13, 2008, sailings, and on the Adventure of the Seas on its August 10, 2008, sailing. She was a Celebrity Grand Marshal of the San Francisco LGBT Pride Parade on Sunday, June 29, 2008. She was accompanied by hordes of Charo look-alikes on a pink float. On May 23, 2008, she was a guest on GSN Live.[citation needed]

She returned to the dance music scene in June 2008 with the single "España Cañi". The single was released through Universal Wave Records.[26] She performed Rihanna's song "Don't Stop the Music" at the 2009 Muscular Dystrophy Association Jerry Lewis Labor Day Telethon. She appeared as the Celebrity Showtime entertainer aboard Royal Caribbean Liberty of the Seas cruise ship on Christmas Eve, 2009. She appeared on the Royal Caribbean ship Adventure of the Seas on February 25, 2010, and continues to entertain guests on Royal Caribbean Serenade of the Seas in May 2010.[citation needed]

On May 23, 2011, she performed parts of her Las Vegas show on the Disney Magic cruise ship's Eastbound Transatlantic crossing to standing ovations. The first half of the show contained more pop oriented pieces while the second half was her playing classical Spanish guitar. She noted her seven years of study with Andrés Segovia several times during this portion of the show. She appeared later in the cruise at an informal autograph-signing session.[citation needed]

In April 2010, she made a guest appearance on Dancing with the Stars. Charo made an appearance on Watch What Happens: Live on February 22, 2011, where she promoted a new song, "Sexy! Sexy!" In July 2011, Charo appeared as a celebrity guest judge on the fifth episode of RuPaul's Drag U, Season 2. In May 2013 she appeared on the final episode of Don't Trust the B---- in Apartment 23. In June 2015, she appeared in an episode of Celebrity Wife Swap, where she swapped with former Love Boat costar, Jill Whelan. The show prominently featured her husband-manager Kjell Rasten and her sister, Carmen, who served as Charo's stylist.[27]

On March 1, 2017, Charo was revealed as one of the contestants who would compete on season 24 of Dancing with the Stars. She was paired with professional dancer Keo Motsepe.[28] On April 3, 2017, Charo and Motsepe were the second couple eliminated from the competition and finished in 11th place.

Charo's year of birth has been the subject of dispute for many years. Official documents in Charo's birthplace of Murcia, including her original Spanish passport and her naturalization papers state that her birth date is March 13, 1941. After immigrating to the United States, Charo said that she was born in 1947, then changed it to 1949.[29] In her final change, she asserted in a 1977 court hearing that her passport and naturalization papers were wrong and that her year of birth is 1951.[30]

The performer has said in interviews that her parents allowed her to falsify her age to appear older when marrying 66-year-old band leader Xavier Cugat in 1966, although according to her later claims, that would have made her 15 at the time. However as noted previously, she has stated in many interviews that she was attending school in Madrid at that age and graduated at 16, not having yet begun her performing career. She has never clarified the obvious discrepancy.[31][10] Numerous articles and interviews published shortly before and at the time of her wedding placed her birth year between 1945 and 1946. In 1964, Charo was referred to as Cugat's "18-year-old protegée".[32] An April 1966 column on the wedding plans stated she was 20 and Cugat was 60.[33] Many sources identified her as 21 on the day of her wedding.[34][35][36]

In October 1977[37]‍—‌the same year in which Charo filed for divorce from Cugat and became a naturalized American citizen‍—‌U.S. District Judge Roger Foley in Las Vegas allowed the 1951 birth year as official, with the performer providing sworn affidavits from her parents in support of her claim,[38][39] a claim that has been viewed with skepticism.[3][40] Commenting on the disputes over her age, she has said that the public's disbelief could prove advantageous: "But if people really believe I'm older, that's fine. Don't be surprised if I come out with my own cosmetics, a new energy bar and maybe some vitamins."[10]

Report a problem
Write to Charo at FanPal • 2023