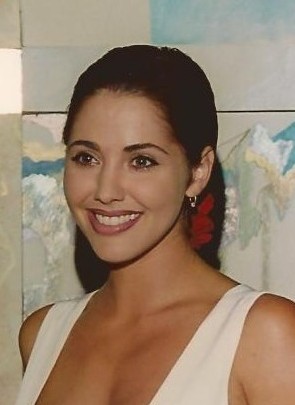 Bobbie Phillips (born January 29, 1972[1]) is an American actress, animal advocate, hotelier and entrepreneur, based out of Toronto, Ontario, Canada.[2]

Born in Charleston, South Carolina, Phillips moved to Hollywood in 1990 and began working in television soon after. Her first acting job was guest starring with Halle Berry on the science-fiction Fox comedy They Came from Outer Space. Phillips was also a sought-after fitness and swimsuit model. Canadian bodybuilder and entrepreneur Joe Weider placed her under contract. During this time she was used in advertising campaigns, as a spokesmodel, appearing on the cover of Muscle & Fitness magazine four times.

She landed her first regular television series for Paramount Pictures alongside Sir Mix-a-Lot in The Watcher. Phillips continued to land roles in television and independent films from comedies to martial arts films; Phillips is a trained martial artist and performed most of her fighting and stunts in these films. On the television series The Crow: Stairway to Heaven (1998), Phillips played the dual role of Talon aka Hannah Foster. With this role, Phillips became the first female to play a crow on screen.[3] In between The Crow: Stairway to Heaven filming, Phillips also showed off her martial arts abilities in a series of tele-films for Paramount Pictures.

Phillips appeared on numerous popular television shows such as The Hitchhiker, Stargate SG-1, The X-Files (Best Actress Winner),[4] Married... with Children, Two Guys and a Girl and Baywatch.

Phillips was a regular on the first season of the 22nd People's Choice Awards winner for "Favorite New TV Dramatic Series" for Murder One.[5] Phillips received praise from Variety for her role as Julie Costello.[6]

She had a small role in the controversial big screen Hollywood film Showgirls. This credit is often mentioned on the box covers for her later films. She has starred in several small independent films and has appeared on stage as well. Prior to acting professionally, Phillips starred in several musicals. She performed as a child at the Dock Street Theater in her hometown of Charleston, South Carolina. Another famous Dock Street alumnus is Thomas Gibson, also originally from Charleston. Phillips and Gibson later worked together, acting in the television series Dharma & Greg.[7]

Phillips is also a successful entrepreneur. She and her husband, Anthony Filipetto, built Hotel Casa Chameleon from scratch in MalPais in the Costa Rican jungle,[8] named after Bobbie's series of telefilms, the "Chameleon" movies (Chameleon, Chameleon II: Death Match, and Chameleon 3: Dark Angel), which she made while under contract with Paramount Studios. In less than a year, the hotel was named one of the "Best Hotels in the World" by Condé Nast Publications. Anthony was her hairstylist on several films and television shows, after meeting on the set of the film Hustle in 2000.

Phillips is also involved in animal rescue work around the world.[2]

She has one son named Mark from her previous marriage.[9][10]

She appeared on the April 17, 2010 episode of the HGTV home design show Divine Design, where it was disclosed that she had recently moved to her husband Anthony's home country of Canada with their three dogs.[2]