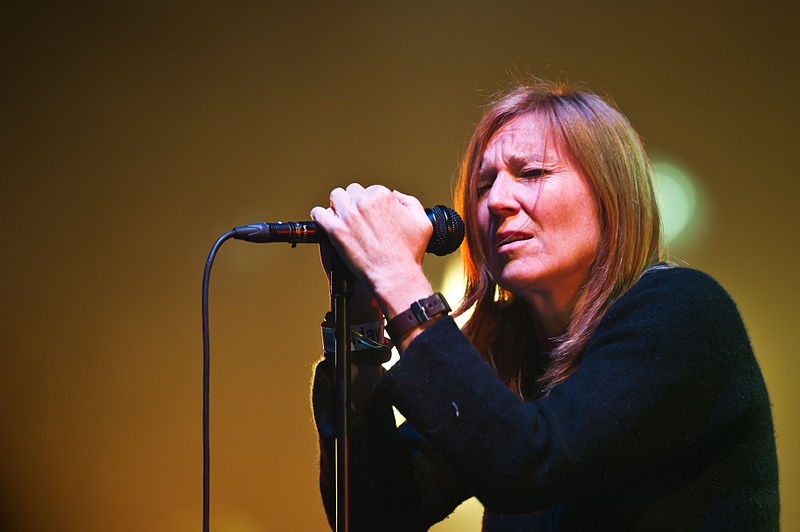 Beth Gibbons (born 4 January 1965) is an English singer and songwriter. She is the singer and lyricist for the band Portishead.

Gibbons was born in Exeter, Devon,[3][1][4] and raised on a farm with two sisters. Her parents divorced when she was young.[5] At 22, she moved to Bath, then Bristol to pursue her singing career, where she met Geoff Barrow, her future collaborator in Portishead.[6]
Read more...

With Adrian Utley, Gibbons and Barrow released the first Portishead album Dummy in 1994 and have produced two other studio albums, a live album, and various singles in the years since.

She has also collaborated on a separate project with former Talk Talk bassist Paul Webb (Rustin Man). Before she joined Geoff Barrow in Portishead, she had auditioned for the singer's slot in .O.rang, the group formed by Webb after Talk Talk's late-Eighties departure from EMI, but Portishead's sudden success pre-empted matters. In October 2002, they released the album Out of Season in the United Kingdom under the name Beth Gibbons and Rustin Man. The album peaked at number 28 in the UK Albums Chart.[7] It was released in the United States a year later: while touring in North America, Variety favourably described her performance with Rustin as "Billie Holiday fronting Siouxsie and the Banshees".[8]

In June 2013, Gibbons announced plans for a new solo album with Domino Records.[9][10] She contributed vocals to a cover of the song "Black Sabbath" with the British metal band Gonga, entitled "Black Sabbeth", released 24 April 2014.[11]

In 2018, Beth Gibbons contributed vocal performances along with Elizabeth Fraser of the Cocteau Twins to the Spill Festival held in Ipswich in an audio installation entitled Clarion Calls which uses the voices of 100 women to commemorate the 100th anniversary of the end of World War One https://www.bbc.co.uk/news/av/uk-england-suffolk-45982141/ipswich-spill-festival-s-clarion-call-uses-100-female-voices

She has cited Nina Simone, Janis Joplin, Edith Piaf, Janis Ian and Elizabeth Fraser of the Cocteau Twins as female musical influences. She also named Bono of U2 as an musical inspiration for his performance on The Joshua Tree, Otis Redding and Jimmy Cliff.[5][12]

Report a problem
Write to Beth Gibbons at FanPal • 2023