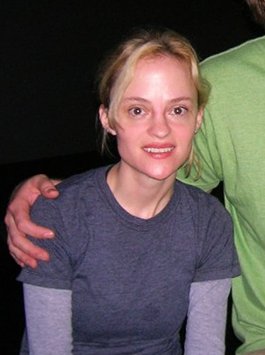 Angela Marie Bettis (born January 9, 1973) is an American film and stage actress, film producer, and director best known for her lead roles in the 2002 TV adaptation of the Stephen King novel Carrie, the title character in May (2002), and in Girl, Interrupted as an anorexic psychiatric patient Janet Webber.

In addition to her work in film, Bettis also starred in two Broadway productions: The Father in 1996 with Frank Langella, and as Abigail Williams in a 2002 revival of Arthur Miller's The Crucible alongside Liam Neeson and Laura Linney.

Bettis was born in Austin, Travis County, Texas, to Mary Lynn (née Guthrie) and Richard Joseph Bettis, twin sister of Joseph "Joe" Edward Bettis, and graduated from Westlake High School. Her debut role was a lead in the romantic tragedy, Sparrow, directed by Franco Zeffirelli, at the age of 18. After that film, she attended The American Musical and Dramatic Academy. She later went on to star in a film called The Last Best Sunday, before supporting Winona Ryder in Girl, Interrupted and Kim Basinger in Bless the Child.

In 2002, she starred as Abigail Williams in a production of The Crucible on Broadway alongside Laura Linney and Liam Neeson.[1] Bettis is most famous for her work in independent horror films, and especially her working relationship with writer/director Lucky McKee. Her title role in McKee's 2002 film May won her something of a cult following. Since then, she has appeared in McKee's Masters of Horror episode, "Sick Girl", and provided a voice-over for his film The Woods. In 2006, their May roles reversed, when McKee acted for Bettis in her directorial debut, Roman, based on a McKee script. In 2011, she played a major role in McKee's adaptation of Jack Ketchum's The Woman.

Bettis starred as Carrie White in Carrie, a made-for-TV remake of Brian De Palma's 1976 classic, and headlined Tobe Hooper's Toolbox Murders, an in-name-only remake of an obscure 1970s horror film. She also starred in the crime thriller Scar.[2] She had a guest role on the TV show Dexter's fifth season as Emily Birch, the first victim of Jordan Chase.[3]