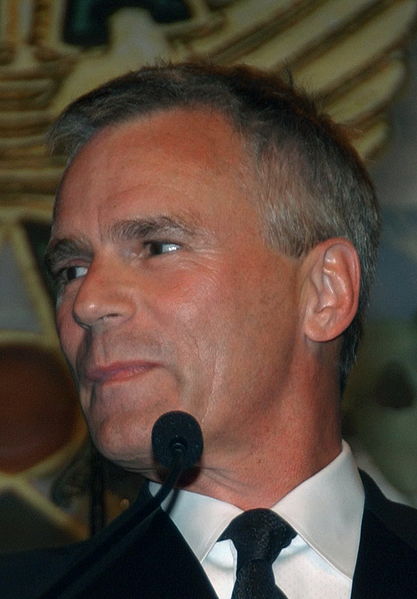 Richard Dean Anderson (born January 23, 1950) is an American actor and producer. He began his television career in 1976, playing Dr. Jeff Webber in the American soap-opera series General Hospital, then rose to prominence as the lead actor in the television series MacGyver (1985-1992). He later appeared in films such as Through the Eyes of a Killer (1992), Pandora's Clock (1996), and Firehouse (1997).

In 1997, Anderson returned to television as the lead actor of the series Stargate SG-1, a spin-off of the 1994 film Stargate. He played the lead from 1997 to 2005 and had a recurring role from 2005 to 2007. Since 1997, he has starred in only one film: Stargate: Continuum, released in 2008, as a spin-off film after the Stargate SG-1 series finale in 2007. He appeared in the follow-up Stargate series Stargate: Atlantis and Stargate: Universe (as Major General and later Lieutenant General Jack O'Neill).

Anderson was born in Minneapolis, Minnesota, the oldest of four sons born to Stuart Jay Anderson, a teacher and Jocelyn Rhae Carter, an artist.[1] He is of Mohawk, Norwegian, Scottish, and Swedish descent.[2] He grew up in Roseville, Minnesota, where he attended Alexander Ramsey High School.[3] As a child, his dream of becoming a professional hockey player ended when he broke both of his arms. He developed an early interest in music, art, and acting. For a short time, he tried to become a jazz musician.[1]

Anderson studied to become an actor at St. Cloud State University and then at Ohio University but dropped out before he received his degree because he felt "listless". Right after his junior year in college, he participated with friends in a cross-country bicycle ride from Minnesota to Alaska. He then moved to North Hollywood along with his friend and girlfriend before moving to New York City, finally settling in Los Angeles. He worked as a whale handler in a marine mammal show, a musician in medieval dinner theater, and as a street mime and juggler.[4] He has stated that this period was "the happiest of life" and has expressed an interest in teaching juggling, clowning, and other circus arts to disadvantaged youths.[5][6]

Anderson's first role was in the American soap opera, General Hospital as Dr. Jeff Webber from 1976 to 1981. In 1982-1983 He starred as Adam in the CBS television series Seven Brides for Seven Brothers (based very loosely on the movie of the same name). In the 1983-1984 season, he played Lieutenant Simon Adams on the 22-week Dennis Weaver series Emerald Point N.A.S. on CBS, stealing away Celia Warren (Susan Dey), the wife of naval lawyer Jack Warren (Charles Frank).[4] Anderson then played Tony Kaiser in the acclaimed TV movie Ordinary Heroes, which aired in 1986.[7]

Anderson came to fame in the lead role of Angus MacGyver in the hit television series MacGyver, which lasted from 1985 to 1992 and was highly successful throughout its seven-year run.[8] The character Angus MacGyver, also known as just MacGyver or Mac, was an optimistic action hero who was notable for using a Swiss Army knife instead of a firearm as his tool of choice.

Anderson would go on to produce two follow-up movies to MacGyver in 1994.[1] After MacGyver ended, Anderson stated "MacGyver was seven years of being in virtually every frame that was shot and having absolutely no life at all."[9]

From 1997 to 2005, Anderson starred as Jack O'Neill in Stargate SG-1, based on the movie Stargate starring Kurt Russell and James Spader.[10] John Symes, president of Metro-Goldwyn-Mayer (MGM), called Anderson himself and asked him if he wanted a part in the series. Anderson watched the Stargate film over and over again and came to the conclusion that the film had "great potential" and signed a contract with the Stargate producers.[6] Anderson agreed to become involved with the project if his character was allowed significantly more comedic leeway than Kurt Russell's character in the feature film. He also requested Stargate SG-1 be more of an ensemble show so that he would not be carrying the plot alone as he did on MacGyver.[11] In season eight, he chose to have his character "promoted" to base commander on Don S. Davis's advice.[12] This enabled Davis to retire from acting due to his ailing health and Anderson to take over the smaller role which involved far less on-location shooting so that he could spend more time with his young daughter.[13] The following season, Anderson terminated his status as star and producer of Stargate SG-1 opting to make several guest appearances per season instead, allowing his sizable role to be filled by veteran actors Ben Browder (replacing Anderson as field commander), Claudia Black (replacing Anderson as the comic relief) and Emmy nominee Beau Bridges (replacing Anderson as Base commander).

At the Air Force Association's 57th Annual Air Force Anniversary Dinner in Washington, D.C., on September 14, 2004, then-Air Force Chief-of-Staff General John P. Jumper[14] presented Anderson with an award because of his role as star and executive producer of Stargate SG-1, a series which portrayed the Air Force in a positive light from its premiere.[15] Anderson was also made an honorary Air Force brigadier general.[16]

In 1995, he co-starred with John de Lancie in Legend, a comic series of only twelve episodes about a dime novel writer in the Wild West who, against his will, has to play the role of his own fictional character. Originally written as a TV movie, with the decision to make Legend a series, the original teleplay became the two-hour pilot episode. Anderson was applauded for his roles as Ernest Pratt and Nicodemus Legend by many critics, most notably John O'Connor from The New York Times.[17]

A great fan of the television show The Simpsons, which he repeatedly referenced during his time on SG-1, Anderson was invited in 2005 to guest star on the show. He voiced himself in the episode "Kiss Kiss, Bang Bangalore", in which the actor was kidnapped by Selma and Patty Bouvier, Marge Simpson's sisters, his MacGyver character having been their longstanding heartthrob.[8] Dan Castellaneta, the voice actor who portrays Homer Simpson (among other characters), made a guest appearance on Stargate SG-1 ("Citizen Joe") and, in describing his unnatural ability to see the life events of Jack O'Neill, made reference to O'Neill's fondness for The Simpsons.[18][19]

Anderson briefly reprised his role as Angus MacGyver in 2006 when he appeared in a MasterCard commercial during Super Bowl XL. While the plot follows the "MacGyver Formula", it is somewhat satirical of the series, showing unlikely if not impossible solutions to the obstacles faced by Anderson's character (in one shot, he cuts through a thick rope with a pine-scented air freshener).[20] The official MasterCard website for the commercial refers to it as "the Return of MacGyver".

Lee David Zlotoff, the creator of MacGyver, announced on May 3, 2008, that a MacGyver film was in production.[21] Anderson has expressed interest in revisiting his role; however, there is no word on who will be playing the role of MacGyver in the film.[22][23]

Anderson cameoed as MacGyver in what seemed to be a Saturday Night Live advertisement parody featuring the show's recurring character MacGruber (portrayed by Will Forte), but was rather a real commercial for both Saturday Night Live and Pepsi, in which the titular character becomes obsessed with the soft drink. This aired three times during the January 31, 2009, SNL broadcast, and the second part aired again during Super Bowl XLIII on the following day.[24][25]

Anderson has also played the role of General Jack O'Neill in Stargate Atlantis and Stargate Universe, which first aired in October 2009.

Anderson joined the cast of Fairly Legal on USA Network in Fall 2010 in the recurring role of David Smith, appearing in three episodes.[26]

Anderson has served as an executive producer in six shows in which he has acted himself: MacGyver: Lost Treasure of Atlantis, MacGyver: Trail to Doomsday, Legend, Stargate SG-1, Firehouse and From Stargate to Atlantis: Sci Fi Lowdown.

Anderson composed the song "Eau d'Leo" for the MacGyver episode "The Negotiator".[27]

Together with Michael Greenburg, Anderson created the Gekko Film Corporation. The company was involved with Stargate SG-1, producing every episode from 1997-2007 with the exception of 2006. The company itself has served as Anderson's backing agency.[28]

Anderson is a member of the Board of Trustees for Challengers Boys and Girls Club, a youth organization established in 1968 with the help of MacGyver producer Stephen Downing, and featured in an episode from season 4 of the show.

Anderson received the 1995 Celebrity Award from the Make-a-Wish Foundation because of his commitment to the foundation. He is also a supporter for various Sclerosis Society non-profit organizations and has done several public service announcements to show his support for the various organizations.

Anderson is an avid supporter of the Special Olympics and was one of many speakers at the 1991 opening ceremonies.

In recent years, Anderson has helped several environmental organizations around the world. He is a member of Board of Advisors of the Sea Shepherd Conservation Society and has worked with the members of the Earth Rivers Expeditions to Produce River Project.[30][31]

Anderson left Stargate SG-1 because he wanted to spend more time with his daughter, stating, "Being a father, well, I don't know if this is a change, but it makes me want to get out of here faster. Get off the clock. Just 'cause the baby is my reason for living, my reason for coming to work."[27]